Winter 2011/12: a weekend cross-country skiing in the Dolomites 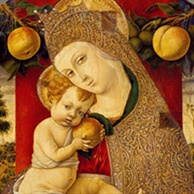 Renaissance:  15th and 16th century paintings from the Accademia Carrara, Bergamo.  National Gallery of Asutralia, Canberra, from 9 Dec to 9 April (www.nga.gov.au).  The Accademia Carrara in Bergamo (a beautiful hill town near Milan) has closed for renovations allowing Australians to see treasures from one of Italy’s finest collections, over 70 works by masters including Raphael, Botticelli, ‘Bellini, Titian and the egnimatix Lorenzo Lotto.  A unique opportunity and well worth a weekend in Canberra.

Leonardo da Vinci, the genius and the myth, Veneria Reale, Turin, until 29 January, www.lavenaria.it. As part of united Italy’s 150th festivities, the genius of Leonardo da Vinci (1452-1519) is celebrated in this extraordinary exhibition hosted in the former royal hunting lodge on the outskirts of Turin.   It includes 30 original drawings by Leonardo, including the celebrated self-portrait as an old man with waving hair and beard.  There is also a collection of works from the 15th century through to contemporary times that investigates Leonardo’s enduring influence.

Van Gogh and the Voyage of Gauguin, Palazzo Ducale, Genova, until 15 April, www.lineadombra.it.  For Gauguin travel was an adventure, discovering distant worlds, for Van Gogh it was an internal journey a trail through colour and the abyss, towards the light of the South and the darkness of life.  The works of these two masters dialogue throughout the exhibition and include works such as Gauguin’s masterpiece Where do we come from? Who are we? Where are we going? as well as over 40 paintings and drawing by Van Gogh. 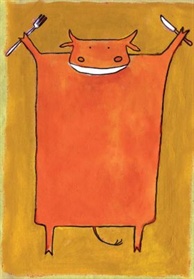 The Fat Ox Fair, Carru (Cuneo, Piedmont) 15 December, www.comune.carru.cn.it.  On 15 December hundreds of gaudily decorated white oxen will squeeze down the narrow streets of Carru, a small town in the heart Piedmont’s wine growing district, the culmination of nearly two weeks of festivities(starting with a polenta and sausage night on 2nd  and finishing with a Xmas concert on 17th) to celebrate this indigenous breed of cattle.  Prized for the quality of their meat, the fair has a serious side, with over one hundred prizes to be over 6 categories. An authentic winter rural experience.

Marche Vert Noel, Aosta, Valle d’Aosta, from 3 December to 6 January, http://gestionewww.regione.vda.it/turismo/default_e.asp. Aosta stands in the middle of the valley that links Mont Blanc with Italy.  It is a pretty small town still enclosed by Roman walls and surrounded by snow-capped mountains, famous for nearby ski resorts such as Courmayer and Brueil-Cervinia.  Although part of Italy it is predominantly French speaking.  From early December to early January it holds celebrated Christmas markets that light up its ancient streets, highlighting the areas culinary and artisan traditions.

Vasari’s Corridor, a secret passage way revealed, Florence, 17 December, www.pirene.it.  Giorgio Vasari is most famous for his biography of the great Florentine Renaissance painters:  The Lives of the Artists.  However, he was also an accomplished artist and architect himself, responsible for building the secret passage that allowed the Medicis to move between the Uffizi and the Pitti Palace.  In a very rare opportunity, the restored passage, which crosses the Ponte Vecchio, will be opened to the public over winter:  guided tours in English lead by guides in Renaissance costume and character, will be offered on 17 December, tickets at 80 euro per person, bookings via the website above.

The Gistchberg-Jochtal Ski Region, 3 December, www.gitschberg-jochtal.com.  Two new cabin lifts which will link the ski fields of Mt Jochtal (2006 mts) with those of Mt Gitschberg (2510 mts) in the northern Dolomites between Bressanone and Innsbruck, creating a single ski zone with 44 kilometres of ski runs and 16 ski lifts, was inaugurated on 3 December.  The star turn is the new circular viewing platform on the top of Mt Gitschberg from where you’ll have a 360 degree view over 500 peaks (check out the view on www.gitschberg.com/en/gitschberg.html# and click on the Panorama button).

If it wasn’t for the baroque Tyrolean churches and onion-domed bell-towers peeping over the snow fields, you could almost imagine yourself in Canada rather than in the Dolomites, a snowball’s throw from the Austrian border: wide open spaces smothered in snow, forests without end, frozen lakes...   In the upper Pusteria Valley, particularly in the section which runs from Villabassa to the border between Italy and Austria, passing the towns of Dobbiaco, San Candido and Versciaco, the scenery is surprising for its openness and vastness, not what ones expects in the heart of the Dolomites.  Rather than ski lifts and black runs, this area lends itself to reflection and a slower pace of activity, perfect for cross country skiing.  In fact  ‘skinny skis’ are the ideal way to move between the towns and villages, with the opportunity of exploring further afield into the valleys that lead to Cortina d’Ampezzo, Belluno and Lienz in Austria.

By car:  take the A22 autostrada that heads north from Verona to the Brennero pass and Innsbruck.  Before arriving at the pass, take the exit for Bressanone and then take the state highway # 49 that heads east into the Pusteria Valley.  By train:  probably the most convenient way to get there is to take the train north from Verona towards the Brennero pass, changing at Fortezza for the Pusteria Valley line (www.trenitalia.it).  Investigate the Mobil Card, which enables you to move freely on both bus and rail in the Alto Adige (www.mobilcrad.info).  By air:  Fly to Venice, Treviso or Verona airports and then use the rail/bus links via the Mobil Card.

The Romantik Hotel Santer is a warm and welcoming four-star hotel in Dobbiaco, with a standard room with half board for 83 euro per person per day.  Hotel Orso Grigio is a recently renovated historic four-star hotel in the pedestrian precinct in the heart of San Candido – its Bar dell’Orso is one of the most popular après spots in town – room with half-board is from 72 euro per person per day.  Zin Senfter Residence is a new addition, also in the centre of San Candido, with 21 elegantly fitted out, self-contained but serviced apartments, with access to hotel services, including the spa – from 82 euro for two people per night.

Ski (but you can also snow-shoe, if you prefer)!  There are over 200 kilometres of cross country skiing trails in the upper Pusteria Valley, of which 120 kilometres are linked to pounded paths that are suitable for walking (take your poles to be sure).

The best place to start is from the Nordic Arena in Dobbiaco, whose trails are useable also at night (from 6.00 to 8.00pm).  From here you can take some of the neighbouring loop trails or head out along the classic route through the Landro Valley towards the Cimabanche and Cortina d’Ampezzo.  Otherwise, you can go east towards San Candido and, beyond this into the Austrian end of the Pusteria Valley and from here into the Sesto and Fiscalina Valleys.  If you go west from Dobbiaco, you  follow trails towards Villabassa and Monguelfo and the Braies Valley.

For something easy, you could leave the Nordic Arena and do the simple four kilometres loop around Dobbiaco lake.  Villabassa, Dobbiaco and San Candido all have train stations, which thanks to recent developments which allow cross country skiers to start directly from the stations, meaning you can explore the valleys as far as you wish, knowing that you can get the train back to your base.  If you are really gung-ho, you can go even further afield as the upper Pusteria Valley ski trails are also part of Dolomiti Nordiski, a 1300 kilometre network that takes you virtually all over the Dolomites from the Val Gardena and Val Badia in the west to Cortina and then to Forni di Sopra near Udine in the east.

All the trails are available on GPS (www.dolomitinordicski.com).  The cost of a weekly pass is 25 euro (!) and the Dolomiti Nordiski Mobile Card is highly recommended, giving you a week’s access to ski runs as well as the use of bus and trains for a cost from 29 to 34 euro(!).

You can also do guided ski safaris run by Fun Active (www.funactive.it) or La Scuola Azzurra in Dobbiaco (www.azzura-ski.com) one of the few such schools in Italy staffed exclusively by registered cross country instructors.

Of course, being high season in the Dolomites, there are also numerous associated activites and festivals to keep you busy in the upper Pusteria Valley:  the Dolomites Balloon Festival (www.ballonfestival.it) is on from 7 to 15 January;  the San Candido Ice Sculpture Festival from 11 to 13 January;  as well as various cross country skiing competitions including a World Cup competition (3 to 5 January) and the classic Pustertaler Ski Marathon, a 42 kilometres race, also open to amateurs (off you go!) on 14 and 15 January.

What are you waiting for?  Skis on (I’m tempted myself!).