May 2018: Invisible Man, Tuner and a weekend in Vercelli

Welcome to Hidden Italy’s May newsletter:  the Invisible Man, Turner, crowdfunding, concets of glaciers and a weekend in Vercelli, the home of Italian rice.

Hidden Italy in May: 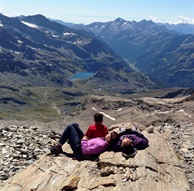 Once again, our monthly newsletter is a tad late, but, fortunately, we managed to squeeze it in by a day.  At the moment, I am sitting on the hotel terrace in Taormina, looking out at Mt Etna – a great way to finish a busy month.  Tomorrow, we all go our separate ways – I’m heading to Abruzzo to scope out a new self-guided itinerary then back to Sydney – can’t wait!

Unfortunately, we had a family group of three cancel on the next Trails to Freedom walk (21 – 29 August 2018).  If anyone is up for a challenging but very satisfying hike in the Italian Alps, please let us know.  Full details: http://www.hiddenitaly.com.au/guided-tours/

Liu Bolin: The Invisible Man, Il Complesso del Vittoriano, Rome, until 1 July; www.ilvittoriano.com.  Known as the Invisible Man, Liu Bolin gained international recognition when he camouflaged himself amongst the ruins of his studio which torn down by the Beijing city council in a ‘modernisation’ drive.  Through his apparently simple and ironic images, Lui communicates powerful political and social critiques  This major exhibition brings together over seventy of his works.

All of Umbria.  National Gallery of Umbria, Perugia, until 10 June, https://gallerianazionaledellumbria.it.  The Galleria Nazionale dell’Umbria (GNU) one of the most important galleries in Italy, turns one hundred this year.  This celebratory exhibition tells the extraordinary story of Umbrian art, which flourished between the Middle Ages and the Renaissance, presenting masterpieces by Arnolfo del Cambio, Benozzo Gozzoli, Pinturicchio, Raphael and Perugino.

Turner: Works from the Tate; Al Chiostro del Bramante; Rome, until 26 August; www.chiostrodelbramante.it.  For the first time, ninety-two works, including watercolours, drawings and oil paintings, from the Tate Gallery in London will be on display in Rome.  Spanning his entire career, these works were kept by Turner for his own pleasure and are now available for the pleasure of everyone.

LoveItaly:  Adopt a Restauration;  https://loveitaly.org.  Thanks to farsighted tax laws introduced in 2014, 2017 saw over forty-one million euro collected through various crowdfunding platforms to finance private projects to protect Italy’s extraordinary cultural heritage.  One of the most interesting platforms is LoveItaly, an international, not-for-profit association of professionals (archaeologists, art historians and architects as well as finance, public relations and media experts) under the leadership of Richard Hodges, president of the American University in Rome.  The association has already completed three projects (in Rome and Pompeii) with more to come.  Contributions welcome from everyone.

Girovagando in Musica - concerts ‘en plein air’; until November; www.gruppocaronte.info.  The Gruppo Caronte, a classical ensemble with a floating membership of around seven was formed in Brescia in 1987.  Since then they have toured constantly, performing over 2660 concerts.  This summer they are going bush, performing in some extraordinary settings, from the banks of the Ticino River to the banks of the Po River; from Spotorno Beach to the lighthouse at Bibbiona; from the ruins of the Roman villa at Toscolano Maderno to the Presena glacier.  Full details of the program on their website.

Vercelli is a small, prosperous city sitting on the flat Padana Plain, halfway between Milan and Turin.  It was a wealthy town in Roman times but became particularly important in the Middle Ages when it was a crucial staging point on the Via Francigena, the pilgrim and trading road that linked Rome with northern Europe.

That Vercelli is one of the more affluent towns of northern Italy, is thanks mainly to the Cisterian monks who have inhabited the nearby abbey of Lucedio since 1123.  In the late Middle Ages, these ingenious and hard-working people drained the surrounding flood plains, converted the marshy lands into a vast network of paddies and introduced a system of rice growing (the first in Europe) that has ensured the town’s prosperity down through the centuries.  Today, Vercelli is still the heart of Italian rice cultivation, with over one hundred different varieties of rice being grown. In the spring time the paddies are flooded for the new crops, creating a spectacular landscape of chequered waterways and endless slies.

A quiet and charming town, Vercelli has a beautifully preserved historic centre, a network of arcades harbouring small shops and antique cafes radiating out from the central Piazza Cavour (once the Roman forum).  Typically northern Italian, the Vercellesi, are an industrious and unassuming people proud of their lovely town which contains many treasures from their fascinating past.

This year, in conjunction with the neighbouring towns of Varallo and Novara, Vercelli is celebrating the life and work of its favourite son, Gaudenzio Ferrari (1480 – 1564), one of the most important Northern Italian artists of the Renaissance.  This splendid and comprehensive exhibition runs until 16 September, a very good excuse to visit Vercelli and enjoy the discrete charms of the northern Italian bourgeoisie.

By car:  Vercelli is almost exactly half-way between Milan and Turin (80 kilometres either way) and is reached from both cities via the A4 autostrada.  By train:  Vercelli is a major stop on the Milan-Turin regional train line, the station is a short walk from the city centre.  By air:  the closest airport is Milano Malpensa, 42 kms away, while Turin Caselle is 61 kms away.

Hotel Garibaldi (Via Thaon di Revel 87).  A short drive from the centre, this 3-star hotel has a small garden, an unusual restaurant (the Cioccoristoreria Bislakko) and a new pastry café, offering delicious sweets.  Doubles from 90 euro.

Il Giardinetto (Via Luigi Sereno 3).  This small hotel, in a beautifully restored palazzo half-way between the station and the centre of town, has a charming retro atmosphere.  Doubles from 80 euro.

Hotel Cinzia (Corso Magento 70).  Outside the town centre, this modern hotel has free parking and a Michelin-starred restaurant.  Doubles from 77 euro.

B&B La Terrazza (Via San Paolo 18).  Set in an historic palazzo a short walk from Piazza Cavour, the town’s main square, this comfortable accommodation has six rooms and offers a rich buffet breakfast.

Christian & Manuel (Corso Magenta 71).  This Michelin-starred restaurant in the Hotel Cinzia, is run by the brothers Costardi and is a must for any visitor to Vercelli.  It offers three different menus (70 euro, 90 euro and 130 euro) and features rice in all its variations as well as a sumptuous selection of desserts.

Trattoria Paolino (Piazza Cavour 5).  At the other end of the spectrum, this lovely old trattoria in the heart of town offers a range of traditional Piedmont dishes, from vitello tonnato, Russian salad and steak tartare to plin (delicious fine pasta), snails and frog dishes (staples in this rice-growing region).  Around 30 ti 40 euro per person.

Il Paiolo (Viale Garibaldi 72).  This small restaurant on the edge of the old town is the perfect place to try panissa, one of the classic local dishes, the gastronomic symbol of the town:  a robust risotto which includes, salami, lard, green beans and lashings of Barbera (the local red wine).  Around 30 euro per person.

Friday evening:  Check in to your accommodation, have an early dinner and get to bed early, ready for a full weekend.

The Gaudenzio Ferrari exhibition embellishes some of the most interesting buildings in the centre of town and provides an excellent itinerary to explore the centre of the town.  Start at the ARCA exhibition space (formerly the church of San Marco) which features a vast fresco cycle by Ferrari that was only discovered during restoration 20 years ago.  The Piazza dei Pesci (site of the old fish markets) is a short walk from here where, in front of the old synagogue, you’ll find the Borgogna Museum, which holds eight panels of the Madonna by Ferrari.

After an obligatory stop for coffee and pastry at the historic Taverna e Tamuzzer (a pastry shop founded by two Swiss in 1889 that once supplied the royal court in Turin) a visit to the church of St Christopher completes the itinerary with a number of Ferrari’s masterpieces on loan from international museums, including the Adoration of the Bay from Budapest and the exquisite Madonna with angel Musicians from Dublin.

After lunch at Follis, in Corso Liberta, another historic pastry shop/café, which was founded in 1904, it’s time to do a bit of shopping.  Vercelli has a number of very good antique shops (there is a large all-day antique market held in Viale Garibaldi on the first Sunday of every month) and has a particularly long tradition on books and book production.  One of the most important shops is the book-binder Legatoria d’Arte at 5 Via Borgogna (an internationally recognised producer of fine books).  Another celebrated shop is Il Piacere and Il Dovere in Piazza Pajetta) which specialises in travel and mountain books.

Sunday morning:  go for a drive.

In April the flat lands around Vercelli are flooded for the new year’s crop, being transformed into a spectacular landscape known as the Terre d’Acqua (the Land of Water) or the Chequered Sea.  To explore the region, drive out of Vercelli along the Strada del Riso (the Rice Road), a 30 km loop past farmhouses and rice paddies.  Along the way, you can visit the Tenuta Veneria, a marvellous historic farm which was the setting for classic ‘neo-realist’ film Riso Amaro (Bitter Rice) starring the marvellous Anna Magano.  From here you can also visit the Tenuta Colombara with its ecological museum but the real star of the region is  the Principato di Lucedio, a vast historic holding that included the Abbey of Ludecio, the 12th century foundation that introduced rice farming.

Sunday afternoon:  get some exercise

Visit the Parco dell Lame, a national park that incorporates marsh lands and water ways created by the flooding of the Po River.  In spring it comes alive with over 190 species of wetland birds, many of them migratory.  To enjoy this, head to the town of Albano Vercellese, where the park headquarters are situated, for an easy 4 km stroll from the forest to the river and back or hire a bike and take a 16 km circular ride that takes you south to the island of Oldenico and back.  Bikes can be hired from the Locanda delle Lame, next door to the park offices, where you can also have lunch before setting out.