Welcome to Hidden Italy’s April newsletter:  Impressionism in Milan, modern art in Florence, an elegant new restaurant in Milan, spring food festivals and 4444 stone stairs to be conquered in the Alps.

Our newsletter is a little late this month, but we made it.  It’s a busy time, with lots of hikers heading to Italy for the spring time: Hidden Italy is running five guided tours in May (Sardinia, Puglia, Sicily and the garden tours of Tuscany and Piedmont) as well as numerous self-guided walks up and down the peninsula.

I’m in Puglia at the moment.  Apart from leading two guided tours, I’m looking forward to finalising some new self-guided tours in northern Puglia and Abruzzo before I head home. 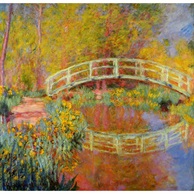 Impressionism and the Avantguard:  50 Masterpieces from the Philadelphia Museum of Art, Palazzo Reale, Milano, until 2 September; www.  Founded in 1887, the Philadelphia Museum of Art is one of the most important in the USA.  This comprehensive museum brings ‘home’ works by some of the greatest modern artists: Monet, Manet, Matisse, Renoir, Chagall, Dali, Kandinsky etc.

The Birth of a Nation: From Guttuso to Fontana and Schifano, Palazzo Strozzi, Florence, until 22 July, www.palazzostrozzi.org.  This exhibition proposes a selection of over seventy works by the most important Italian artists of the second half of the last century.  As well as the artists above, it includes works by Alberto Burri, Mario Merz and Michelangelo Pistoletto.

The Heirs of Caravaggio: Da Ribera to Luca Giordano; Palazzo Zito, Palermo, until 10 June.  Caravaggio was the rock-star of his age and had a profound effect on the direction of art, particularly on his contemporaries in Spanish-ruled Naples in the early 17th century, when nobles fell over them selves to commission his work.  This selection painting comes from the private collection of Roberto Longhi, the collector and art theorist who rediscovered Caravaggio and his followers for the modern world.

Hidden Italy Weekend: conquering the longest stairway in Europe (in the Alps north of Venice)

The Cala del Sasso (the Stone Stairway) is one of the most extraordinary structures in the European Alps: a sweeping trail of four thousand, four hundred and forty four stone stairs and gutters that were built by the Venetians in the 14th century to get timber out of the mountains and on to barges moored on the Brenta River and from where it was towed to the shipyards of Venice, one hundred and twenty kilometres away.

The stairway is seven kilometres long.  It starts at Sasso, a hamlet on the edge of the Altopiano di Asiago (the High Plains of Asiago) and winds it way down through beech and larch forests to Lebo di Valstagna, a small village on the bank of the Brenta.  With the advent of rail and roads at the end of the 19th century, the Cala fell into disuse and disrepair but has been rediscovered and restored in the last ten years becoming a challenging but popular hiking trail.  It is also one of the longest stairways in the world.

Extraordinary though it be, the Cala del Sasso, is only one of many of the well-marked walking trails that wind through the beautiful forests of the Altopiano and the mountains that surround it.  Settled by people from across the mountains in Bavaria in the 11th century, the seven small towns and villages that grew up on the Altopiano lived in splendid isolation until World War I rudely intruded.  With peace restored, the villages returned to their traditional vocations of agriculture and forestry.  It has only been in the last thirty years that a lo-key form of tourism has developed, crossing country skiing in the winter and hiking in the summer.

With its rolling pastures, extensive forests and fascinating traditions, Asiago and its Altopiano makes a perfect place for a spring weekend.

By car:  from Vicenza, get on the Autostrada A31.  Take the last exit, Piovene Rochette, and then follow the State highway 31 to Asiago.  By train:  the closest station is in the lovely town of Bassano del Grappa, 38 kilometres away – regular buses run from here to Asiago.

Hotel Europa is an elegant and welcoming three-star hotel in the centre of Asiago (Corso IV Novembre 50).  The five suites can also be rented on a weekly basis as self-contained apartments.

Hotel Gaarten (Via Kanotole 13) is four-star hotel in the neighbouring village of Gallio.  It has all modern comforts, including an extensive wellness centre.

The Meitar Golf Resort, two kilometres out of Asiago, is a luxurious hotel built around an historic mountain lodge, overlooking an 18-hole golf course in summer which becomes a series of alpine ski runs in the winter.

Da Ricardo (Via Val Maddarello 88) is the most celebrated restaurant on the Altopiano.  Chef Rissardo Cunico offers dishes such as gnocchi di Rotzo in parmesan cheese nests and pumpkin ‘tortino’ with caramelised hazelnuts.

Ristorante Casa Rossa (Via Kaberlaba) specialises in traditional regional dishes with a creative twist, such as ‘bigoli’ pasta with duck sauce and tortelloni filled pheasant and truffles.

Locanda Auroa (Via Ebene 71) celebrates local cooking home-cooking with dishes such as gnocchi of Asiago cheese and speck and a surprising dessert of potatoes and walnuts.

Friday evening:  Check in to your accommodation, have an early dinner and get to bed early, ready for a full weekend.

Since 1310, when it assumed the role at the head of the Union of the Seven Comunes’ (a political affiliation which lasted until the Union reluctantly joined united Italy in 1860) Asiago has been the administrative, geographic and economic capital of the Altopiano.  It is a charming town with some interesting sites including the cathedral dedicated to St Matthew, with its neoclassical façade and rich interior, as well as the Fontana del Fauno, an elaborate fountain carved out of local red marble which is centrepiece of the pretty public gardens.

After coffee, it’s time to do some shopping.  Tato and Tata (Via IV Novembre 19) has a wide range of household goods, many produced locally.  The Antica Apicoltura Kaberlaba produces not only a variety of local honeys but also pollen-based cosmetics and essential oils based on forest plants.  The Altopiano’s most famous product though is the delicious mild cheese named Asiago, which is made from the milk of cows that graze the lush high plains in the summer.  The best place to sample and buy this is the award-winning Caseficio Pennar (Via Pennar 313) that has been operating in Asiago since 1927.

Saturday afternoon:  Get some fresh air.

Until 1918, the Altopiano formed part of the border between Italy and Austria.  Starting in 1915, over half a million Italian and Austrian soldiers slugged it out in the mountains and forests for the next three years in a brutal conflict with an appalling loss of life and general destruction.  One of the few positives to come out of this drama were the roads and trails used to service the troops, which have been turned into a wonderful network of well-marked hiking (and cross-country skiing) trails, taking you through some of the most beautiful country in the Alps.  Loop walks and longer distance walks fan out from all of the seven villages of the Union.  Comprehensive walking maps and notes are available from the tourist office of the Sette Comuni in Via Stazione 5 in Asiago, www.asiago7comuni.it as well as the tourist offices in each of the villages.

This extraordinary trail starts from the church at Sasso on the outskirts of Asiago.  The departure point is 956 metres above sea level.  It is well signed by route # 778 waymarkers.  It is open all year round but is best in the summer.  The descent is approximately 7 kilometres and takes around one hour, arriving at Lebo, 221 metres above sea level.  After a snack and a wander along the river, the real works starts: heading back up the four thousand, four hundred and forty-four stairs to Asiago (originally there were only four thousand, four hundred and twenty-two but due to landslip in 1498, the Venetians added another twenty-two).

The climb takes around two hours with an altitude gain of 721 metres.  Local legend has it that if you hold hands with your better half for the whole ascent, your perpetual love is assured.  While you are doing climb spare a thought for Alberto Limatore who, in 1999, rode up the route on a bike without stopping or putting a foot down once.

Sunday afternoon:  Explore the other villages of the Altopiano

While Asiago is the largest, the other villages also hold their own charm and interest.  Roana is the best preserved and is the place where the traditions and dialect of the ‘Cimbri’, the original German-speaking settlers, are best preserved.  There is an Institute here dedicated to the maintenance of the local language as well as a well-appointed museum that celebrates the art, architecture and history of their forebears.  At Casuna, there is large museum dedicated to the local craft of terracotta production.

Astronomers have been coming to the Altopiano to make the most of its clear skies to study the heavens.  Italy’s largest optical telescope, Copernicus 182, is still operating outside the village of Pennar.  Guided tours can be booked in the village’s tourist office.