Welcome to our last newsletter for 2017: Colosseum, Monet, Dada and Christmas on the Amalfi Coast 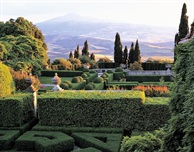 We have had two cancellations that have freed up places on two guided tours next year:  a double room on the Gardens of Tuscany tour (4 May to 16 May 2018) and a single room on the Trails to Freedom hike (21 August to 29 August 2018).  Please let me know if you are interested and available:  simon.tancred@hiddenitaly.com.au.

We would like to thank you for all your support and interest throughout 2017.  We hope you have a safe and prosperous 2018 and wish you a buona passeggiata!

The Colosseum Upper Rings, Rome, until 30 Dec, www.coopculture.it.  For the first time in several decades, the upper rings, Levels IV and V, of the Colosseum are open to the public.  Sitting 40 metres above the ground, this was the seating for the plebs and it offers spectacular views over the Colosseum, the Forum, the Palatine Hill and most of inner Rome.  They are reached by a passage that has never been opened to the public before, the only section that retains its original aspect: white stucco walls with original colours and traces of the restoration done after the 217 AD fires.

The Network of House Museums of Milan; www.casamuseo.it.  Since 2008, the Bagatti Valsecchi Museum, the Boschi di Stefano Historic House, the Necchi Campiglio Villa and the Poldi Pezzoli Museum have been together in the network of Milanese historic houses.  They present nearly two hundred years of Milan’s cultural, artistic patrimony and daily life seen through the eyes of four influential families, 19th century nobility and 20th century industrialists.  A fascinating insight into the city’s style and psyche.

Micat in Vertice, Accademia Musicale Chigiana, Siena, until March, www.chigiana.it.  Siena’s Accademia Musicale Chigiana celebrates the 95th edition of its annual music festival, with performances by some of Europe’s finest musicians in the city’s most beautiful settings, including:  a concert of music by Scelsi, Holst and Britten in the extraordinary cathedral, recitals by pianist Giuseppe Albanese (Debussy and Chopin); violinist Dmitry Sitkovetsy (Bach’s Sonte and Partite) and soprano Gemma Bertagnoli (a homage to Rossini).

Masterpieces from the Musee Marmottan Monet, Complesso del Vittoriana, Rome, until 11 February, www.ilvittoriano.com/index-en.html.  This wonderful exhibitions presents Monet’s most beloved works, the ones that he kept for himself in his last home in Giverny.  It includes over sixty works that are now held in the Musee Marmottan Monet: from the celebrated caricatures of the late 1850s to the rural and urban landscapes of London, Paris, Vétheuil, and Pourville; from his portraits of his children to the canvases dedicated to the flowers in his garden; including his ultra-modern painting of weeping willows, the path under rose trellises, the Japanese bridge and his monumental water lilies shimmering in a radiant haze with violet dust.

Sandro Chia, The Warriors of Xian, the Pinacoteca Bari, Bari (Puglia) until 31 March, www.pinacotecabari.it/index.php/iniziative.  Sandro Chia is one of Italy’s leading contemporary artists (emerging at the Venice Biennale as part of the Transavanguardia movement).  With the permission of the Chinese government, eight copies were made of sculptures found in the Xian archeological site (7 warriors and one horse).  These have been ‘appropriated’ by Chia, transformed by his use of formal motives and bold colours.

Hidden Italy weekend: a getaway on the Amalfi Coast in winter.

Atrani (population 900) is only a seven-hundred metre walk from Amalfi, following a centuries-old stone path around the southern headland, and yet it remains relatively unknown, a sleepy village that is as spectacular as any of its more celebrated neighbours: a jumble of whitewashed houses and churches that seems to have tumbled down the sheer mountainside into the sea.  Its setting and twisting network of alleys inspired some of the best works of Maurits Cornelis Escher, who lived here between 1923 and 1935.

Part of the reason for its tranquillity is that Atrani was only connected to the coastal highway in the 1950s.  Even now, drivers flash past, carried on a high, arched viaduct that separates the village from its beach, barely registering Atrani’s laid-back charm.  This, and the path, seems to be enough to discourage day-trippers from dropping in.  There is just one hotel, a handful of small b&bs and a couple of family-run trattorias.  Three cafes ring the main-square, which in the evening it is filled with the murmur of the locals catching up over an aperitivo and the squeals of kids dribbling footballs.

Things change a bit for for Christmas.  On 8 December every year over sixty strategically placed spot-lights are switched on, bathing the arches, alleys and houses in a blaze of colour, transforming the little fishing village into a multi-hued Bethlehem until 6 January.  It’s a tradition that started over forty years ago, the idea of two local electricians who wanted to thrill the village children.  Last year it was stepped up a gear with the introduction of digital lighting but the festivities, which include a Christmas procession and food tastings, still retain their decidedly relaxed southern Italian atmosphere.

This, its mild climate and its location on one of Italy’s most beautiful stretches of coastline, makes Atrani is an excellent location to spend a winter getaway weekend.

By car:  the simplest way to drive here is to head south down the A1 autostrada from Naples, taking the Salerno exit and then the state highway 163, a windy road that follows the coast to Atrani.  By rail:  take the train to Salerno and then the SITA bus to Atrani (the bus runs every hour from a stop outside the entrance to the station).  By air:  The closest airport is Napoli Capodichino airport, which is 80 kilometres to the north of the Amalfi Coast.

Palazzo Ferraioli, Via Campo 16.  This is a lovely 4-star hotel set in a historical palazzo tucked away in the lanes.  It has a good restaurant and a sunny roof-top terrace with views over the village and the coast.  Double from 190 euro per night.

B&B La Scogliera, Via Di Benedetto 3).  A short walk from the main piazza, this charming B&B has three elegant rooms with views over the sea.  Doubles from 120 euro.

A’Paranza (traversa Dragone).  Run by three brothers, A’Paranza is one of the best seafood restaurants on the coast.  They specialise in fresh pasta, soups and grilled fish drawn from the day’s catch.  Between 40 to 50 euro per person.

La Arcate (Via Di Benedetto 4).  A lively and welcoming spot with a terrace overlooking the sea, this family-run restaurant serves simple but refined local cuisine.  Between 30 and 40 euro per person.

Check in to your accommodation and then head down to Piazza Umberto I to join the locals for an aperitvo and dinner.

Sleepy as Atrani may be today, it did have its day:  Atrani was founded in the 5th century and in Middle Ages, as part of the powerful Maritime Republic of Amalfi, it was where the dukes were enthroned and resided.  By the 14th century, with the collapse of the republic, it had slipped back into obscurity, although there are still some signs of its glory days tucked away in the alleys.

Start your exploration of Atrani in the main square to visit the recently restored church of San Salvatore del Birecto.  This Moorish-style church was founded in the 10th century and was where the dukes were crowned.  It has a magnificent set of bronze doors that were installed in 1027.  A short walk up winding stairs then takes you to the Collegiata di Santa Maria Maddalena, probably the villages most important structure.  Perched above the sea, the Collegiata is topped with a dome covered in beautiful maiolica tiles.  It was founded in 1274 and holds important works of art from the 16th and 17th century.

Head back to Piazza Umberto I for a cappuccino at the Antico Caffe Vittoria with a ‘pasticciotto’ d’Atrani, the famous local pastry with cream and sour cherries and then head up Via del Carmine.  Head up Via Carmine to the pretty church of the Carmine, which is Christmas HQ for Atrani.  The church holds a life-size Nativity scene, dating from the 18th century, each character a faithful portrait of someone in the village.  All the figures have nicknames and a visit to the church for the locals is like dropping in on old relatives.  In the evening of 23 December, the figures are carried in a Christmas procession through the streets and lanes to the sea to acclaim from the locals.

From the Carmine, gird your loins, and carry on up the street, ending at a flight of five hundred stairs that leads up to the Santa Maria del Bando.  Set into a cliff, the climb is worth it, the church has breath-taking views over the village and the coast.  ‘Bando’ means proclamation in English – in the days of the republic, death sentences were proclaimed from here, echoing down the valley, perfectly audible in the main piazza of the village.

After a light lunch (salad or pasta at Mistral) take the stone path that leads out of the village, wraps around the headland and, after 10 minutes) takes you into Amalfi (the last section a narrow, enclosed lane that leads you into the heart of the town).

As one of the four maritime republics, Amalfi ruled the trade of the Mediterranean (the others were Genova, Pisa and Venice) much of its heritage of this era is ticked away in its picturesque lanes and squares, including its spectacular cathedral, at the head of a steep flight of stairs, with its arched cloisters, so beautiful that they are known as the cloisters of Paradise and the Arsenal which holds the Museum of the Marine Republic and the Compass (Flavio Gioja was a marine pilot who supposedly invented the compass around 1300).

After pausing for a slice of lemon-flavoured ricotta cake at the Pasticceria Pansa (that has been operating since 1830) or a paper cone of fried prawns and calamari at Cuoppo d’Amalfi, continue up the hill to the Paper Museum (the production of paper driven by watermills has been an important industry here since the Middle Ages.  After a long day, go down to the beautiful waterfront for a drink and dinner at the Ristorante Lo Smeraldino, watching the sun go down over the port.

Take the bus up to Ravello, the most delightful town on the coast, which at 350 metres above the sea offers extraordinary views along the coast.  One of the great pleasures of Ravello is just mooching around its lanes and squares enjoying the atmosphere and views but there is also much to see here.

The cathedral, which dates from the 11th century and has beautiful Byzantine mosaic floors.  A short walk from here is the Villa Rufolo, which was founded in the 13th century and now hosts the Ravello Music Festival that runs from July to October.  It has lovely Moorish cloisters with gardens and sea views.  After a break at the Pasticceria Calce, you can continue on to the Villa Cimbrone, which was transformed by an English nobleman, Lord Ernest Williams, into a pleasure dome: restructuring the villa and creating an immense park with a vast terrace over the sea.

After lunch (perhaps a calzone with ricotta at the Cumpa Cosimo) you can take an interesting marked path that winds out of the town, under the gardens of Villa Cimbrone and then dips back down to Atrani, via the Collegiata di Santa Maria Magdalena.  It takes from 1 to 1.5 hours.