August 2017: Caravaggio, Zeus and a weekend on Lake Orta

Welcome to the Hidden Italy August newsletter:  Caravaggio, Picasso, Zeus, the Wonder of the World and a weekend escaping the heat and crowds on Lakes Orta.

It has been a hot dry summer in Italy and I am looking forward to some relief when we start our autumn tours, most of them nestled in the mountains of the north:

Trails to Freedom, a hike through the Alps to the Swiss border; Trieste and Friuli tour that explores the north-east corner; Venice and the Italian Lakes, that includes time on Lake Como and a side trip into Switzerland; and Verona and the Dolomites, visiting the valleys and Alpine peaks near the Austrian border. 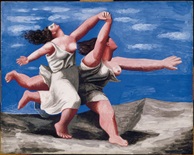 Picasso by the Sea;  Peggy Guggenheim Collection; Venice; www.guggenheim-venice.it.  This exhibition presents a collection of drawings and paintings done by Picasso between February and December 1937 on the theme of the beach.  It is centred around his masterpiece ‘On the Beach’, also painted in this period, which was one the most loved by Peggy Guggenheim, the eccentric New York collector who was a close friend of the artist and had made Venice her home.

Caravaggio and his Followers; Castello Aragonese, Otranto (Puglia); www.mostracaravaggio.it, until 24 September.  Roberto Longhi, the celebrated art critic (1890 – 1970), wrote his thesis in 1911 on Caravaggio, then an obscure 16th century artist, now one of the most loved and appreciated masters of the Italian Renaissance.  This exhibition presents 21 works from Longhi’s own collection, including Caravaggio’s extraordinary painting ‘Youth Bitten by a Thorn’ and is being held in the impressive castle of Otranto, a beautiful small port in southern Puglia.

Serpotta and his Times;  Oratorio dei Bianchi; Palermo, www.fondazioneterzopilastro.it; until October 1.  Between the end of the 1600s and the beginning of the 1700s, under the extravagant patronage of the Spanish aristocracy, Palermo became one of the centres of Italian art, bringing together the finest goldsmiths, mosaicists and sculptors, the greatest of these being Giacomo Serpotta, whose sublime statues graces the churches and oratories of the city.  This exhibition celebrates the master’s work and this florid period of Palermo’s long history.

Veloviso, Monviso, Cuneo (Piedmont), www.veloviso.ue.  Monviso is a pyramidal peak that forms part of the border between Italy and France.  Its perfect form dominates the horizon and it is known as the Re di Pietra (the King of Stone).  It is much loved by cyclists and it includes some of the classic climbs of the Giro d’Italia.  Veloviso is a project that presents 36 cycleways, over 1200 kms of paths, that explore the mountain:  21 are designed for mountain bikes; 9 for ‘cycle-tourists’ (following paved roads and unsealed lanes) and 6 for families.

#EatMantua, Palazzo Te, Mantova (Lombardy), www.eastlombardy.it and www.centropalazzote.it until 10 September.  East Lombardy has been nominated the ‘Enogastronomic REuropean Region for 2017.  As part of the celebrations, the beautiful town of Mantova (south of Verona) will host a variety of wine, food and cultural events during September, including a series of diiners prepared by Jeune Restauranteurs d’Europe, an association of the finest young chefs of Europe.


Frederick II, the Wonder of the World;  Palazzo Ghislieri, Jesi (Le Marche); www.federicosecondostupormundi.it .  Frederick II, Holy Roman Emperor (1196 – 1254), was one of the towering figures of the Middle Ages in Europe.  His political and military abilities coupled with his passion for the arts and sciences, astonished his contemporaries who referred to him as ‘stupor mundi’ (the Wonder of the World).  Frederick was born in this small town in Le Marche and to celebrate their most famous citizen, Jesi opened a new museum dedicated life of the Emperor including his coronation, Crusades, his unlimited passion for the arts and falconry.

With its twenty chapels populated with hundreds of statues immersed in a forest of beech, oak and pine trees, the UNESCO-listed Sacro Monte (Sacred Mountain) overlooks Lake Orta, the most romantic of all Italian lakes, with panoramic views over the pretty town of Orta San Giulio and the little island of San Giulio in the distance.

The first of the chapels was commissioned in 1590 and the last in the middle of the 1700’s.  They contain 375 life-sized terra cotta statues and 900 frescoes, an outdoor art gallery of the work of some of the finest artists of northern Italy that takes you from the Renaissance, through the Baroque and finishes with the extravagances of Roccoco.  Each chapel depicts a different stage in the life of St Francis with extraordinary realism and was intended to be a type of pilgrimage, a pleasant 2 kilometre walk winding through forest with lake glimpses takes the visitors through the life of Italy’s most beloved saint.

A paved trail leads down from the Sacro Monte to the village of Orta San Giulio, a romantic combination of cobbled lanes, historic buildings and villas, with a smattering of lake-shore cafes, belle époque hotels and Michelin-starred restaurants.  From the small port, you can take a boat over to the delicious Isola di San Giulio, almost completely taken up by a 15th century Benedictine convent, which has a pretty loop walk around the perimeter that finishes at the island’s only restaurant with views back to the town.

Surrounded by forested hills, Lake Orta offers a very pleasant refuge from the August heat and the crowds on the coast – perfect for a weekend escape.

By car:  Take the A26 Genova-Gravellona-Toce autostrada, taking the Borgomanero exit and then following the provincial highway 229 to Orta. By train:  the nearest station is Orta-Maisino on the Novara-Domodossola line.  By air:  The nearest airports are Torino Ceselli or Milano Malpensa.

Hotel San Rocco:  Set in an ancient monastery with beautiful views over the lake, this is the most exclusive hotel on the lake.  Double rooms from 275 euro.

Hotel La Bussola:  Sitting on sunny hill just outside the town, this relaxed hotel is surrounded by gardens and has a swimming pool.  Double rooms from 130 euro.

Contrada dei Monti:  In a medieval lane in the centre of San Giulio, set in a restored 18th century palazzo, this hotel has a lot of charm, with a hidden garden, pergolas, frescoes and wrought iron.  Double rooms from 110 euro.

Leon d’Oro:  This centrally located, historic hotel is one of the institutions of the lake and has been open since 1815.  It has had many celebrated guests including the troubled German philosopher Friedrich Nietzsche.  It retains much of its Old-World atmosphere and has a restaurant with a terrace overlooking the lake.  Double rooms from 110 euro.

Villa Crespi:  The villa is a 19th century folly, a Moorish palace with minarets and gardens overlooking an Italian lake.  It has been faithfully restored as a luxury hotel and has one of the fanciest restaurants in the district which boasts two Michelin stars and prices to match.  Dinner starts from 120 euro per person.

Locanda d’Orta:  This charming restaurant is in the centre of town, has lake views from its tables and has one Michelin star.  The degustation meal costs 75 euro per person with alla carte meals around 50 euro per person.  There is also a bistro on the top floor with meals between 25 and 30 euro per person.  The Locanda also has some beautiful rooms, starting from 85 euro for a double.

Ristorante San Giulio:  This is the only restaurant/bar on the island, with a handsome internal dining room and a garden terrace on the lake front.  The lunch menu is 18 euro per person, while dinner costs 30 per person (and includes the boat transfer from and back to Orta).

Check in to your accommodation, enjoy the passeggiata along the water front and have an early dinner overlooking the lake.

Dedicated the morning to the artistic treasures of the Sacro Monte but first start the morning with a two kilometre walk around the lake promontory, leaving Orta to the north along a well-marked paved path that skirts around the shore, looping around to the back of the promontory.

From here, stairs lead up to the Sacro Monte.  There are twenty chapels scattered amongst the forest, the most celebrated are Chapel III (a Renaissance St Francis renouncing his wealth), Chapel X (a Baroque St Francis confronting Satan), Chapel XV (St Francis receiving the stigmata and Chapel XX (a Roccoco St Francis being canonised).

From here, a winding path leads back down to Orta, where you can have lunch.

Explore Orta.  The town is a little gem, beautiful lanes interspersed with historic buildings: such as the parish church Santa Maria Assunta, with its noteworthy 17th century paintings; the Casa dei Nani (the House of the Dwarves) the oldest building in town, dating from the late 1300s; and the Palazzo Penotti Ubertini, which hosts the Pila Art Gallery and temporary exhibitions.

Orta also has some good shopping:  Il Buongustaio and Bottega di Gino (operating since 1919) are two shops that offer the best of the local specialities such as focaccia with butter grapes and honey, as well as local cheeses, hams, salami and fidighin, the local mortadella made from pancetta and liver.  Profumo d’Orta offers a range of eau de toilette and perfumes made from natural fragrances from around the lake.  You can also get original souvenirs from Penelope, which produces a range of hand-printed textiles, and Vetroe, which produces glass works.

Time to go out to the island.  Regular water taxis operate between Orta and the Isola of San Giulio, which costs 5 euro for the round trip.  The legend goes that San Giulio brought Christianity to the area in the 4th century, ridding the island of snakes and dragons (presumably pagan).  The beautiful basilica dedicated to him dates from the late Medieval period (mass is held at 11.00 am on Sundays).  A loop walk around the island, laid out by the abbess of the convent,  Anna Maria Canopi, 40 years ago with regular prayer panels inviting you to silence and reflection, finishes at the only ristorante/bar on the island, which has tables in a garden overlooking the lake, perfect for a long lunch.

Pella is a small town on the opposite of the lake, a fifteen-minute boat ride from Orta.  On a spur 700 metres above Pella, is the church Medieval church of the Madonna del Sasso, which has spectacular views over Lake Orta and north to the snowy peaks of the Italian, French and Swiss Alps – a fantastic way to finish your visit.  For the virtuous, there is a steep path that leads up from Pella to peak.  For the rest, there is a shuttle service.