June 2017: Turin, Cremona, Pompeii and a weekend in the Roman Hills

Welcome to the Hidden Italy June newsletter:  Michelin-starred food home-delivered in Turin, Monteverdi in Cremona, Greeks in Pompeii and a weekend in the beautiful Roman hills.

We are pleased to report that all the guided Hidden Italy tours are fully booked for 2017 although there are plenty of places on the 2018, including the marvellous Garden of Tuscany tour (4 May to 16 May) and the Gardens of Piedmont (23 May to 4 June).  For full details please click here).

“Jeremy and I have recently completed your inaugural "Gardens of Piedmont" tour with Paul Blanchard and wanted to let you know what a wonderful experience this tour was for us.  Every segment was a treat and Paul continually “found" helpers everywhere we visited who were expert in their field and added depth to his already vast knowledge of the region.  Thank you so much for including this chapter in your Hidden Italy guided walks program.  Thoroughly recommended!”  Carmel and Jeremy F, Melbourne, June 2017.

The Road of Galleries Centenary, Monte Pasubio (Vicenza) www.stradadellegallerie.it.  Built 1917 in the final stages of World War 1, this epic road was excavated out of living rock in less than ten months, climbing from 1216 mts to 1928 mts up the face of Mt Pasubio, at the foot of the Alps thirty five kms north of Vicenza and passing through fifty two galleries and tunnels, several of which are spirals – a masterpiece of military engineering.  To celebrate its centenary this spectacular hiking trailwas completely restored, offering extraordinary views across the peaks and cliffs to the north and the plains to Venice in the south.

Ristorante Del Cambio, Piazza Carignano, Turin, www.delcambio.it.  Opened in 1757, the Ristorante Del Cambio in the centre of Turin is one of the great culinary institutions of Italy serving traditional Piedmont cuisine, revitalised by new Michelin-starred chef Matteo Baronetto.  For only 70 euro per person you can have a slice of history and your own four course Michelin-starred meal at home by ordering a take-away box complete with ingredients and instructions via the restaurant’s Shop on its website.  Orders must be placed by midnight, your box containing the ingredients and instructions will ready for pick-up the following day.  The current menu includes a goose lever terrine; prawns with hazelnut; seaweed lasagne with veal ragout; and bonet, the classic Piedmont chocolate dessert.

Pompeii and the Greeks, Palestra Grande, Pompeii (Naples) until 27 November, www.pompeiisites.org.  Greek culture was most fashionable in this prosperous Roman city, as it shown by the architectural styles and decorations, statues, jewellery, weapons and ceramics, even the graffiti was in Greek.  Curated by the Swiss architect Bernard Tschumi, this fascinating exhibition explore the relationship between Pompeii and Mediterranean Greece via over six hundred pieces borrowed from Italian and European museums. 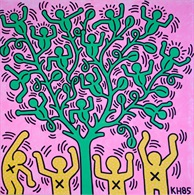 Haring: The Deep Roots of Pop Art, Palazzo Reale, Milano, www.mostraharing.it.  This fascinating exhibition explores the work of New York artists Keith Haring (who died 32 years old in 1990) by comparing his work with the sources of his inspiration: from Classical archaeology to the fabulous figures of Hieronymous Bosch, from the creations of Native Americans to modern cartoons, before arriving at the works Dubuffet, Klee and Jackson Pollock.

Monteverdi and Caravaggio, art and music of the 17th century, The Museum of the Violin, Cremona, until December, www.monteverdi450.it.  Eighty kilometres south-east of Milan, the beautiful town of Cremona was home to Stradivarius, Guarneri and Amati, and still produces the finest stringed instruments in the world.  To celebrate the 450th birthday of Claudio Monteverdi, the father of opera, born in Cremona in 1567, the has a program of musical and artistic events including an event at the Museum of Violins has reconstructed the full orchestra of Monteverdi’s Orfeo via, the first modern opera, via its collection of historical instruments.  Exhibited alongside is Caravaggio’s rarely seen painting The Lute Player, on temporary loan from a private collection.

20th Century Italy: A Story, Palazzo Reale, Palermo, until 31 August, www.federicosecondo.org.  This exhibition explores Italy’s progress through the 20th century via the works of its principal artists and movements from the Futurismo of Balla and Boccioni and the Metaphysics of De Chirico and Carra to the Informal paintings of Afro and the conceptual works of Pascalli, Castellani and Boetti.

The Alban Hills, better known as the Castelli Romani (or the Roman Castles) are less than forty kilometres south of Rome, a cluster of beautiful forested hills wrapped around volcanic lakes.  Inhabited since the Neolithic era, they have been an integral part of Rome’s history:  favoured by the emperors Caligula and Domitian, they provided refuge for the Romans during the barbarian invasions and, in the Middle Ages, were fought over by the feudal powers of the city.

It was only between the middle of the16th century and the end of the 18th century that the area experienced some peace and prosperity when the great Roman families competed with each other to build the biggest and most impressive summer retreats: enormous palaces designed by the finest architects of the day: Borromini, Vignola and Bernini.

Less than 30 minutes by train from Rome, today, the pretty towns that are scattered through the hills of the Castelli Romani, not only provide an escape from the bustle of the Italian capital (the Pope’s summer residence, Castel Gandolfo, sits on the edge of Lake Albano) and are also are perfect base from which to explore the capital.

By car:  The best way to explore the Colli is with your own car.  Frascati, the main town of the Castelli Romani, is reached by taking the A1 autostrada south from Rome, then taking the Monte Porzio Catone.  By train:  Frascati is connected by regular trains from Rome Termini station, taking around 30 By air:  The nearest airport is Roma Ciampino, 8 kms from Frascati

Park Hotel Villa Grazioli (Grottaferata, Via Umberto Pavoni 19).  This 4-star hotel is set in a luxurious palace built by Cardinal Carafa in 1580, which still conserves the original chapel and frescoes by Giovanni Paolo Pannini (1737).  Doubles from 95 euro.

Hotel Colonna (Frascati, Piazza del Gesu, 12).  Built of the foundations of a 13th century palace, the original building was bombed in the Second World War.  It was restored and reopened as a 3-star hotel in 2000.  Double rooms from 80 euro.

Locanda Specchio di Diana (Nemi, Corso Vittoria Emanuele 13).  This hotel was born in 2012, offers seven suites, each one differnet from the other, set in defferent buildings throughout the village.  Doubles from 70 euro.

La Taverna dello Spuntino (Grottaferrata, Via Cicerone, 20).  An institution since the 1960s, this taverna offers handmade pasta and ravioli like Nonna used to make.

La Vecchia Frasca (Frascati, Via Don Buttarelli 12).  A classic ‘Castelli’ trattoria, whose specialities include fettuccine with artichokes and prosciutto as well as tagliata cooked in balsamic vinegar and chcory asparagus.

Osteria L’Aricciarola (Ariccia, Via Borgo San Rocco 9).  The great speciality of the this osteria is the porchetta d’Ariccia (Ariccia roast pork), a true delicacy.  But the restaurant alos offers a generous selection antipasti and pastas.

Check into your hotel, join the locals for in the passeggiata, an aperitivo and enjoy an early dinner.

The visit begins at Piazza Marconi in Frascati, a balcony overlooking Villa Aldobrandini (1598 – 1602), a magnificent Mannerist creation, which, with famous fountains, is one of the stars of the region.  After visiting the Villa you can walk to the gardens that surround Villa Tortonia, a perfect combination of parklands and architecture.  Time for a coffee and pastry at Pasticceria Purificato.

Time to explore the district, first driving through the Regional Park to the Archeological Park of Tuscolo, the magnificent ruins of an Etruscan city that predated Rome, with views across the plains to the capital.

Some of the finest wines in central Italy are produced in the Colli Albani including Frascati DOC (in its famous raffia wrapping) and Marino DOC.  First stop is the Cantina Da Santino (Frascati, Via Pietro Campana 27) one of the last ‘fraschetta’ where you can enjoy some of their fine wine with a simple meal.  From here you can visit the Azienda Agricola Villa Simone (Frascati, Via Frascati Colonna 29) one of the historic producers.  Guided visits of their cellars can be made by calling 06 944 9717.  Last stop is at the Azienda Agricola Antiche Terre Tuscolane (Frascati, Via di Colonna 25) a coop of four families formed in 2010.  Their best known wine is Cannellino di Frascati, judged to be one of Italy’s finest sweet wines.  Visit and degustation of three wines are run every day at 11.30.

The Parco Regional dei Castelli Romni (the Regional Park of the Roman Castles)has a network of walking trails and cycling paths.  The simplest is an easy 10 km loop walk around Lago Albano (a beautiful volcanic lake) that starts and finishes near Castel Gandolfo, a sumptuous Renaissance which is the Pope’s summer getaway.  There are a variety of cycle trails in the nearby hills that range from an easy ride in the Pratoni del Vivaro to a more demanding 30 km climb up Monte Artemisio and Monte Carvi, which includes a paved section of ancient Roman Road.  Bikes can be hired from Bio & Bike in nearby Nemi (347 671 4424, www.bioebike.com).

Nemi is a lovely small town overlooking Lago di Nemi, well-known for its passeggiata and shopping.  Nemi is famous for its strawberries, which can be bought from the Mercantino della Frutta, an obligatory stop for anyone coming up to the ‘Castelli’.  The Borgo degli Aromi offers candles and household goods, while some of the Catelli’s fine food can be sampled and bought at the Fantasia Mediterranea or the Salumificio Castelli.  Finish the day with a stroll around pretty Lago di Nemi and a visit to the Museum of the Roman Ships, dedicated to two ships found in the lake that dated from Caligula time.