Welcome to our first newsletter for 2017, it includes Caravaggio in Rome; the 1960s in Milan; a weekend skiing under the shadow of Mt Rosa and a novel way to help earthquake victims and your waistline.

We have posted the dates and opened the bookings for the 2018 Hidden Italy guided tours:  Puglia, Sicily, Sardinia and the Garden tours on Tuscany and Piedmont in spring (May) as well as Trails to Freedom, Venice and the Lakes, Verona and the Dolomites and Trieste and Friuli in autumn September) - please join us!

What can you do with all those old stories mouldering away in the drawer (and the new ones about to join them)?  Put them up on our Blog: http://www.hiddenitaly.com.au/whats-on/blog/  Please have a look - all feedback welcome!

Events in Italy in January:

Central Italy was wracked by a number earthquakes in 2016.  The most lethal was the one that hit the small town of Amatrice in the region of Abruzzo, where nearly 300 people died.  Less deadly but equally devastating were the series of quakes that hit the towns of Norcia, Visso and Casteluccio in the neighbouring region of Umbria on 30 October.

Not only is this an area of great natural beauty and historical importance, it is also one of the culinary centres of Italy, famous for its cheeses, honey, small goods, truffles, chocolates and biologically grown saffron, lentils and other legumes.  One of the long-term consquences of such disasters is the impact they have on local business, laden with goods but shops destroyed and nowhere to sell them.

The Italian population has rallied, inundating the businesses with orders.  Many of these fine products can be ordered online and sent internationally.  Do your part and have some fabulous treats at the same time:

Exhibition in Italy in January: 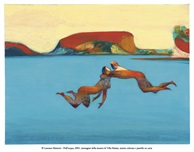 Trespassing. Villa Manin, Passariano di Codroipo (Friuli), until 19 March (www.villmarin.it).  Born in Brescia in 1954, a painter, illustrator, narrator and traveller, Lorenzo Mattotti is a difficult artist to classify.  He started with comics moving to illustrating of the classics, designing posters for festivals and the covers for some of the most important magazines in the world, including Le Monde, The New Yorker and La Repubblica.  This exhibition presents over four hundred works, a journey through colour and imagination.

The Origins of Still Life in Italy, Villa Borghese Rome, until.19 February. www. http://galleriaborghese.beniculturali.it.  Caravaggio’s magnificent still life of fruit in a basket ‘Canestra’ is one of three of his works which form the centre piece of this exhibition which explores the evolution of ‘still life’ paintings in Papal Rome in the first half of the 16th century.  Other artists present include works by Duhrer and Rubens.

Boom! 60.  Modern Art.  Museo del Novecento, Via Marconi 1, Milano, until 26 March, www.museodelnovecento.it.  This exhibition is a celebration of Italian ‘modern’ art in the 1950s and 1960s, the exuberant period of the ‘economic miracle’, particularly as it was portrayed in the most famous weekly magazines and newspapers of the era such as Epoca and L’Europeo.

Lucienne Bloch: inside the life of Frieda Kahlo; ONO Contemporary Art, Bologna, until 26 February (www.onoarte.com).  Frida and Lucienne met for the first time at MOMA in New York in 1931: two women artists in a profoundly masculine world who supported each other to the end.  Lucienne’s photos immortalise the great Mexican artist in love, politics and art.

Valle Vigezzo, another weekend in the shadow of Monte Rosa.

Surrounded by glaciers and some of the highest peaks in the European Alps, the Vigezzo Valley runs between Italy and Switzerland, connecting Domodossola, the last stop before the Simplon Pass, and Locarno, a handsome town on the northern tip of Lake Maggiore in Ticino, the Italian-speaking canton in Switzerland.

An undulating plateau that extends for nearly eight kilometres, the valley is bounded to the north and south by gentle hills completely covered in pine forests.  It has a scattering of ancient villages and towns that have their own fascination:  for centuries the men and boys of the area left the valley at the beginning of winter in search of work in the plains and cities of Italy as chimney-sweeps and stone masons, as well as more ‘noble’ professions such as painters and perfume-makers.

It is a magical place, particularly when buried in abundant snow like this year, providing spectacular scenery and perfect conditions for the cross-country skiing that has been practiced here since 1920, when the Alfred Sartori Cross Country Ski Centre was founded in Santa Maria Maggiore.  Slightly daggy, underdeveloped and reasonably priced, the Valle Vigezzo is a world away from the better-known ski resorts and the perfect place for a Hidden Italy weekend!

By train:  Domodossola is on the main line that connects Milan and Geneva.  From here you can take the famous Vigezzina/CentoValli railway that links Domodossola with Locarno, stopping in all the towns of the valley along the way.  By car:  Take the A8 autostrada from Milan, then the A26.  At the end of this take the Domodossola-Sempione highway north, leaving at the Valle Vigezzo-Masera exit.  By air:  the closest airport in Malpensa (Milan) 108 kilometres away.

Hotel La Scheggia (Santa Maria Maggiore, Via Cavour 25.  This lovely, family-run, three-star hotel has a quite setting ) on the edge of the ‘capital’ of the valley.  It has an excellent restaurant and many of its rooms have been recently restored.  140 euro per person half-board.  B&B Luce del Mattino (Santa Maria Maggiore, Via Cavour 5).  With a suite and two well-appointed and spacious rooms, this B&B is close to both the town centre and the railway.  Double with breakfast 90 euro.  Hotel La Perla (Craveggia, Locality Vocogno, Via Belitrandi 2a).  Of recent construction, this three-star hotel is close to the cablecar that goes up to the main downhill fields at Piana Vigezzo.  It has five apartments which sleep from 3 to 5 people.  Double with breakfast 80 euro.

Rifugio Il Focolare (Druogno, Via Vallari 3).  With its informal atmosphere, this ‘rifugio’ (mountain hut) is renowned for its generous portions.  The menu includes all kinds of game, polenta cooked in the fireplace, and classic local dishes such as gnocchi ossolani and buckwheat tagliatelle.

Friday.  Before taking the Vigezzo/Cantovalli railway to your hotel, visit Domodossola.  Controlling a very strategic route through the mountains between Italy and Switzerland, Domodossola has a long history of resistance and independence: it was the main bulwark of the ‘Lepontii people against Roman invasion in 12 BC; in September 1944, Domodossola rose up against the Nazi and Fascist rule and was briefly the capital of the Free Partisan Republic of Ossola.  It has a charming medieval centre and is worth a poke around.

Close to the centre of Santa Maria Maggiore, the Alfredo Sartori Cross Country Ski Centre (www.centrofondovigezzo.it) is HQ for skiing in the valley.  Here you can hire all the gear you’ll need, tickets for the cable-cars, change rooms, food and a ski school.  It is also the start of over twenty kilometres of cross country ski routes:  two easy 2.5 km circuits for beginners; the 7.5 km ‘Santa Maria Maggiore-Druogno loop’ which heads east and  is classified as black but doesn’t offer any great technical challenges and the ‘Santa Maria Maggiore-Malesco loop’, which is also 7.5 kms but heads west and is classified red (the two loops can be joined up).  Every Tuesday and Thursday evening 2.5 kms are illuminated and opened to the public.

In the afternoon, after lunch and a rest, explore the interesting history of the valley in the streets museums of Santa Maria Maggiore.  Vigezzo was known as the ‘valley of the painters’ and a collection of portraits and landscapes by local artists from the 1700 to 1900 is on display at the Rossetti Valentini School of Fine Art.  The valley was also renowned for its perfumers (two locals Giovanni Paolo Feminis and Giovanni Maria Farina were the inventors of Eau du Cologne) and a new museum dedicated to the art, Casa del Profumo, has recently been opened.

On a darker note, it was also known as the valley of the chimney sweeps.  The Museo dello Spazzacamino (the Chimney Sweep Museum) explores the Dickensian history of the ‘profession’ when skinny young boys of impoverished families were ‘rented’ to Fagan-like characters to clean the chimneys of the cities and villas of Italy in the winter.

Go downhill skiing.  A modern cable car in the village of Craveggia takes you up to Piana di Vigezzo (1714 mts) the downhill ski area of the Valle Vigezzo (www.pianadivigiezzo.it), which has over 20 kms of old school ski runs.  Without any artificial snow, the runs follow the natural line of the terrain, with narrow stretches and sudden changes of incline.  The most challenging is the black run Roccette that starts from Mt Trubbio, 2064 mts.  There are two red runs, Trubbio and Fraschella, that are joined together for competition slalom and downhill races.

Take a lovely train ride into Switzerland.  The Vigezzo Valley is served by an historical single gauge train (better known in Italy as the little blue train of the Vigezzina and, in Switzerland, as the little train of the Centovalli), on a railway line which links Domodossola to the Swiss town of Locarno (www.vigezzinacentovalli.com).  It takes around 1.5 hours each way.

An Alpine railway par excellence, the Vigezzina is a fabulous ride, passing through wonderful landscapes of woods, wild mountains, rivers and waterfalls along a route of fifty-two kilometres including eighty-three bridges and thirty one tunnels.  Completely immersed in nature offers passengers the chance to see up close some breath-taking scenery.  Once past Valley Vigezzo, the little blue train crosses the impressive Swiss territory of beech woods, rivers and jagged mountains to reach Locarno.

Locarno sits on the northern tip of Lake Maggiore.  It’s a very pleasant town.  Things to do:  take a 15 minute cable car ride up to the Santuary of the Madonna del Sasso, which has spectacular views over Lake Maggiore and the surrounding Alps; go to the old town and visit the Visconte Castle, with its impressive collection of Roman glass; go for a stroll around the lakeside and have lunch at the elegant Osteria del Cententario.