We’ve had a busy year with two new guided tours (to Sardinia and Trieste/Friuli) both of which went really well – and I can’t wait to get back there next year (Sardinia is full, but there are still a couple of places for Trieste/Friuli).  We have also introduced two new itineraries to Piedmont: a self-guided through the sweet rolling vineyard-covered hills of the Langhe as well as a fabulous guided hike through the Italian Alps to Switzerland, following a World War II escape route.

Spanish Steps, Rome.  At the foot of the Spanish Steps, Bernini's Barcaccia fountain has been uncovered in all its glory after extensive restorations.  The travertine fountain was created between 1626 and 1629 on the orders of the Barberini Pope Urban VIII.

Matera, Basilicata.  Matera is an extraordinary town in Basilicata in the deep south of Italy - isolated but rich with history and traditions. Below the modern town in a deep ravine, are the famous 'Sassi', one of Italy's oddest urban settlements, an abandoned medieval cave city with prehistoric origins. Surprisingly, last week, Matera was appointed the European Cultural Capital 2019. We spend a day exploring this fascinating town on the May Puglia tour (www.hiddenitaly.com.au/guided-tours/).

Royal Palace, Turin.  After years of slow progress, the finishing touches have finally been added to the Royal Palace collection of the Savoy family, dukes of Turin from the 12th to the 18th century, then the kings of untied Italy, from 1860 to 1948.  Starting with the fully restored Baroque royal palace itself (located in the elegant heart of Turin) the collection now extends through the left wing (the Armoury) and the Royal Library (with the famous Leonardo da Vinci self-portrait as an old man now on permanent display) and the Royal Gallery in the right wing, which includes work by Bellini, Van Eyck, Mantegna and Rembrandt.  Amazing! 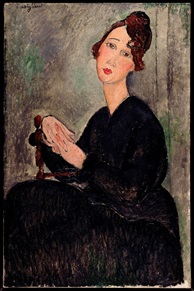 Modigiano and his friends; Palazzo d’Arte e Cultura Fondazione Palazzo Blu (http://www.modiglianipisa.it/).  Modigliano was the embodiment of the artist as a transgressive genius.  ‘Modi’: accursed and licentious; the handsome dandy with so many lovers; the misunderstood genius who sought solace in wine and absinthe and lived a bref but intense life.  In the beautiful Palazzo Blu, this important exhibition brngs together works from the Pompiduo Centre; the Musee de L’Orangerie and masterpieces from private collections to recreate the cultural climate in which Modigliani’s extraordinary artistic adventure unfolded.  Until 15 February.

Juan Miro: the creative impulse.  Fruttiere di Palazzo Te, Mantova (http://www.miromantova.it/)  The exhibition includes 53 works by the great Catalan artist, including oil paintings of astonishing beauty, brightly coloured tapestries, sculptures of terracotta and bronze, and drawings, offering a historic overview from 1966 to 1989 of almost thirty years of the artistic output of one of the painters who had most influence on the European avant-garde.  A special feature of the itinerary is the striking reconstruction of the Sert and Son Boter studios, where Miró created his masterpieces, with all the objects, brushes and tools that the artist used to create his works, preserved thanks to the Fundació Pilar i Joan Miró.

Felice Casorati, between Europe and America.  More appreciated outside than inside Italy, most of Felice Casorati (1883 to 1983) paintings are found in galleries and private collections throughout Europe and America.  This exhibition is his native town was funded by the the Ferrero (chocolates) Foundation and includes over 40 painting, at the centre of which is almost always a still, intense female figure.

The Val Venosta is beautiful valley that starts at Merano (30 kms drive from Bolzano in the Italian Alps) that sweeps east through endless orchards before narrowing and curving north to climb up the Resia Pass (1507 mts).  Surrounded by two of the highest mountain groups in the region, the Palla Bianca (3738 mts) to the north and the Ortles (3905 mts) to the south, the valley’s austere natural beauty is enhanced by the scattered tranquil stone towns that still preserve much of their glory days when it was a fulcrum for trade routes that linked the German speaking north with the sun and abundance of the Mediterranean.

The upper Val Venosta is known as the ‘land of the four borders’ where the region of Alto Adige meets Lombardy, with Switzerland to the east (accessed via the Stelvio Pass) and Austria to the north (on the other side of the Resia Pass).  Since Roman times, armies, traders and pilgrims converged on the valley, leaving behind their languages, churches and monasteries (including the magnificent Monte Maria abbey, still functioning, the highest in Europe) and wealth: Glorenza, for example. Is a small jewel, a perfectly preserved medieval trading town, still surrounded by its 16th century, its buzzing centre filled with restored patrician palazzi and criss-crossed by narrow cobbled lanes.

Although still part of the Alto Adige region, the upper Venosta valley is miles, both physically and spiritually, from the famous ‘total ski’ resorts of the nearby Dolomites.  Without the crowds, excessive infrastructure of ‘gourmet’ mountain huts of its famous neighbour, its quiet lateral valleys are perfect for people who love alternative winter sports.

Car:  Take the autostrada A22 north from Verona, taking the Bolzano Sud exit and continuing on the ‘spuerstrada’ from here to Merano and then north along the state highway 38.  Train:  From Bolzano (on the main line between Verona and Innsbruck) take the train to Merano.  From here a very comfortable, single line train runs to Malles, the ‘capital’ of the upper valley.  Shuttles run from here north into the valley.  The nearest airport is Verona-Villafranca.

The Gaberhoff, a classic 4-star hotel in Malles, is a point of reference for the whole valley: with large, luminous, modern rooms, a ‘wellness centre’ and an excellent restaurant (half-board from 71 euro person).  Hotel Ristorante Zum Mohren & Plavina, also in Malles, is set in a 350 year old palazzo, that has been recently restored with modern edge (half-board from 70 euro per person).  Hotel Lamm, a 4-star hotel in Tubre a village high on the Swiss border, is a lovely hotel that dates from the 18th century and has been recently modernised (half-board from 65 euro).  Hotel Stocker is a good value and welcoming traditional 3-star hotel in the village of San Valentino alla Muta near the Resia Pass (half-boadr from 54 euro per person).

There is plenty of good downhill skiing.  Although not as numerous as their Dolomite cousins, the ski infrastructure in the Val Venosta are modern and well serviced by shuttles and mountain huts.  The main ski areas are: Belpiano, Maseben, Malga San Velentino and Watles (full details are available from the website: www.ortlerskiarena.com).

There are plenty of winter sport alternatives to traditional downhill, which are mostly concentrated in the small lateral valleys that lie north of Malles: the Slinga, San Valentino and Roja valleys on the left and the Valle Lunga on the right, just before the Resia Pass.

Cross country skiing
The best place is the Circuit of the 3 Borders starting at the Resia Pass, which takes through three different countries in 15 kms, starting and finishing in Italy, passing through Austria and then Switzerland.  Otherwise there is the 15 km circuit in the neighbouring Valle Lunga, which is all above 2000 mts; a 12 km circuit in San Valentino and finally the 5 km Curon circuit, which takes you past the area’s most famous site: a 13th century bell-tower emerging from the Lake Resia, all that is visible of the medieval town that was submerged when the artificial lake was created in 1956.  There is also a 5 km walking track on the lake, if you want a break from your skis.

Toboganning
As throughout all the Italian Alps, toboganning is a very popular sport.  All the towns have their own toboggan slopes (tobogans can be rented for around 6 euro per day) but the best is in the town of Resia with an illuminated 1 km track with its own chair lift.  There is also a good illuminated track in San Valentino which is open until 11.00 pm.

Snowkiting
Given its orientation, the Venosta Valley is windy.  Snowkites make the most of this using the frozen Resia Lake as a perfect surface.  Information, equipment and lessons from the Alto Adige Kitesurf School, tel: 335 6026 836.

Sci Alpinism (snow mountaineering)
A very popular pastime is ‘ski alpinismo’, a combination of cross country skiing and mountaineering.  The classic route is to the Piz Sesvenna (Sesvenna Peak) with lunch at the Rifugio Sesvenna mountain hut, tel: 0473 830234 but the round trip takes 5 hours.  A less demanding route (though still 3.5 hours) climbs up from the Malga Melago (mountain hut) the Valle Lunga to Mt Glockhauser or alternatively to the very popular Rifugio Palla Bianca mountain hut, tel: 0473 633434.