July 2016: Michelangelo, archaeological diving, mountain concerts, Escher and a weekend in the los

It's been a busy couple of months, wandering around Sicily and Sardinia, bedding down our new self-guided tours (Alba and Le Langhe and Western Sicily and the Egadi Islands) and researching new tours (including a three week self-guided walk from Assisi to Rome, which will be available in 2017).

While the spring southern Italy tours next year are fully booked (Sicily, Sardinia and Puglia) there are still places available on the Gardens of Tuscany and the new Gardens of Piedmont tours in May/June: for details see www.hiddenitaly.com.au/guided-tours/

Music at Altitude, Lake Maggiore and Lake Orta, until 28 September, www.distrettolaghi.it.  In it’s 10th year, this unusual festival offers thirteen concerts in a variety of open-air setting overlooking the lakes and Alps, including high pastures and mountain lodges (rifugi).  The audience needed to hike to the concerts, lead by local guides.

Archaeological diving, Ministero dei Beni Culturali and Marina Diving, Loana port (Albenga, Liguria) 22 to 24 July and 7 to 9 October (www.marinadiving.net).  Gallinara is a small island 2 kms off the western Ligurian coast (heading toward the French border).  With the guidance of Italian Cultural ministry and the cooperation of number of local diving companies, small group diving groups will be organised to visit the wrecks of two Roman ships that lie at 40 metres depth off the island (one of them, Ship A, was 40 mts long and went down in the 1st century BC carrying over 10,000 amphora’s of wine) – a spectacular and unique opportunity.

The Bronzes of Riace, Museo Archeologico Nazionale, Reggio Calabria, www.bronziriace.it.  The discovery of the two extraordinary Greek bronze sculptures (hauled out of the Straits of Messina by fishermen in 1972) was one of the archaeological finds.  They finally have a suitable home: after six years of renovation, with a budget of over 30 million euro, the National Archaeological Museum in Reggio Calabria has finally reopened:  230 cabinets over 4 floors, tell the story of this ancient Greek city, via sculptures, funeral gifts, music, theatre and daily objects, finishing with the magnificent bronzes. 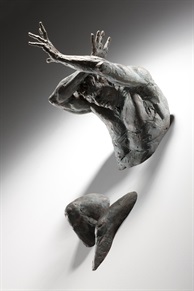 Matteo Pugliese, Obstinate Spirits, Villa La Versiliana, Marina di Pietrasanta, to 12 August.
Born in Milan in 1969 and raised in Sardinia, Matteo Pugliese is one of Italy’s most important contemporary sculptures.  Held in the beautiful Villa La Versialiana (in the shadow on the Carrara marble quarries) this exhibition presents thirty-five works produced over the last five years, including works from his on-going series: the Beetles, the Custodians and the celebrated ‘extra moenia’, figures immerging from the walls.

Michelangelo to Vasari, Palazzo Medici Riccardi, Florence, to 24 July (www.michelangelovasari.it).  A collection of friendly letters between Michelangelo and his fellow artist and biographer Giorgio Vasari is the centre piece of this unusual exhibition.  Written between 1550 and 1557, the letters have been recently restored and digitised.

Escher, Palazzo Reale, Piazza Duomo, Milan, to 22 January, 2017 (www.palazzorealemilano.it).  Over two hundred works, arranged in eight sections, take you on a voyage through the artistic world of the great Dutch graphic designer, focussing on the tessellation and impossible worlds of his later years.

A weekend on the Coloured Islands off the Neapolitan Coast:

The Isole Pontine are a handful of volcanic islands scattered off the coast north of Naples.  Although within striking distance of both Naples and Rome, the little archipelago hardly gets a mention in guide books, which is a good thing.  Although popular with locals the islands are rarely visited by foreigners.  They are never over-run, even in summer when the waterfront promenades of the pretty fishing villages, the beaches and bays buzz with scantily clad Italians.  Blessed with stunning natural beauty, these five islands also have a rich history (Neolithic people mined and traded obsidian, a black volcanic glass; Circe ensnared Ulysses here during his peregrinations around the Med (so the legend goes); Emperor Augustus’ daughter Giulia and Caligula’s sister Agrippina were exiled on the islands) making them a fascinating getaway and a great place to discover a more relaxed and traditional side of Italy, largely untouched by maddening crowds.


How to get there:

The Pontine Islands (Ponza and Ventonene) can be reached by hydrofoil or ferry from the ports of Formia (closer to Naples), Anzio or Terracina (closer to Rome).  The trip takes around 1 hours (by hydrofoil) or 2.5 hours (car ferry) and costs 27 euro one way (timetables:  www.laziomar.it or www.navilib.it).

By car:  Formia can be reached by car by taking the A1 autostrada from Rome to Naples, then taking the exit for Cassino, and following the signed provincial highway to Formia.  Cars can’t be taken to the islands during summer but they can be garaged at Golpho Services at the Formia port.

By train:  There is a direct train from Rome Termini station to Formia (about one hour)

It really depends what you are after.  July to August is hot and popular: the islands are busy with Romans and Neapolitans, strutting their stuff.  Prices go up and accommodation is hard to find, but with the noise, colour and movement and the joie de vivre of the South, an Italian summer holiday can be a lot of fun.

If you prefer a more tranquil experience, it’s probably best to go in May/June, when there are less visitors about, the locals are relaxed, prices are down, the wildflowers are out and the migratory birds are passing through.  September is also very pleasant, with its long balmy evenings and water still warm from the summer.

The island of Ponza is the best base from which to explore the archipelago: it’s the largest island and has the biggest town (population 3300).  Hotel Chaia di Luna is a 4-star hotel on the appropriately named Via Panoramica.  Overlooking the island’s most spectacular beach, the hotel is ten minutes’ walk from the centre of town (www.hotelchaiadiluna.com).  Piccolo Hotel Luisa is a very nice family-run 3-star hotel overlooking the port that has been operating since 1950 (www.piccolohotelluisa.it).  The charming B&B Il Gabbiano sits on a peak with a large private terrace views over the sea to the island of Palmarola (www.ilgabbianoponza.it).

If you really want to get away from it all, try the island Ventonene (22 nautical miles, or 40 kms, south-east of Ponza) the only other permanently inhabited island of the archipelago (population 745).  The Hotel Agave e Ginestra is a lovely villa surrounded by green, sitting high above the sea.  It has twelve very comfortable rooms and a celebrated Brazilian chef (www.agaveginestra.it).

Have an aperitivo on the waterfront in Ponza:  Ponza is a very attractive small fishing town, it’s small pastel-coloured block houses crowding up the side of a natural amphitheatre that curves around the old port.  The social and shopping centre of the town is the ‘piazzetta’ and the little lanes that run off Corso Pisacane, the pedestrian promenade that wraps around the port.  The classic spots for an aperitivo are the Pasticceria Gildo, open since 1960 and the Bar Tripoli, well known for its aperitivi and spritz.  Another popular spot is Café Gelatria Maga Circe, famous for its gelato and mojitos.  If you want to do some shopping, Brandina is well-known for its bags and accessories, while you can stock up on fragrances and perfumes from Acqua di Ponza, both on the Corso.  The quiet little ‘suburb’ of Santa Maria, another fishing village, is tucked around the northern end of the bay, reached on foot via a narrow tunnel that dates from Roman times.

Go to the beach:  The biggest sand beach on the island is Il Frontone, complete with deckchairs and restaurants and bars.  In summer, a regular boat runs between the port and the beach.  A second tunnel, also dating from Roman times, links Ponza town to its most celebrated beach, Chaia di Luna, a narrow strip of sand under a 100 metres cliff.

Explore the island:  A spectacular two lane road with an infrequent bus runs the length of this skinny (200 metres at its narrowest) linking the little hamlets of Le Forne and La Piana but the best way to discover the island is by the water.  The Cooperativa Barcaioli Ponzesi offer tours in former fishing boats, eg a day trip that includes a lap of Ponza, visits to the neighbouring islands Palmarola and Zannone, with swimming stops and lunch on board (www.barcaioliponza.it).  However, the best way to explore the island is hiring your own boat, either a ‘gozzo’ (a traditional timber boat with an inboard engine) for the day, which can be rented with or without a driver from Tritone Barche, or rent a ‘gommone’, or rubber dinghy, from Diva Luna (www.divaluna.com) that costs around 50 euro for the day.

Go for walk or go diving:  A marked walk leads out of town to the top of Mt Guardia, the highest point on the island (398 mts).  Apart from the great views, you can also visit the remains of a Roman necropolis.  The Ponza Diving Centre offers 22 different dives around the coast at various levels of ability, costs start from 38 euro per person (www.ponzadiving.it).

Visit Ventonene:  Although only 2 kms in length, Ventonene is the second largest, and the only other permanently inhabited, island of the archipelago.  It’s a 40 km hydrofoil ride from Ponza.  Despite its small size, there is plenty to do:  it has a fascinating history, some nice beaches and a couple of good hotels and is well worth a visit in its own right, particularly in May, when migrating birds stop on the way from Africa to Northern Europe.

Ventonene has a long history as a place of exile: Emperor Augustus’ daughter and Caligula’s sister Agrippina (the remains of the imperial villa can be visited); Napoleon built a prison here his opponents and even Mussolini did time here.  During the Middle Ages, Saracen pirates made it a base from where to raid the rich cities on the Italian coast.  In 2009, a ‘sunken museum’ of Roman ships was found at a depth of 150 mts off the coast, many of the relics are now held in the island’s interesting archaeological museum, hosted in a 17th century fortress above the port.

Ventonene is best explored on foot.  Highlights include the Museo Storico Archeologico, the Villa Giulia archaeological site; the islet of Santa Stefano with its Napoleonic prison and rocky bays; the Museo della Migrazione (a museum dedicated to the over 130 species of migratory birds that visit the island) and the Porto Romano, the perfect place to join the locals for an evening passeggiata.