Welcome to the Hidden Italy March newsletter, which includes the Cinque Terre Marathon, Easter, wild boar, Futurism, Impressionism and a weekend in the mountains above Bologna.

Due to a cancellation, we have three places available on our Sicily in the Spring guided tour, starting in Palermo on 29 April and finishing in Taormina on 12 May, the last three places in our guided tour for 2016.  If you would like to join the tour, please let me know:  simon.tancred@hiddenitaly.com.au.

At 6.00pm on Tuesday 12 April, in collaboration with Mary Rossi Travel (Neutral Bay, Sydney), Hidden Italy will be introducing our walking and garden tours for 2017: Gardens of Tuscany (5 to 17 May, 2017) and the brand new Gardens of Piedmont (24 May to 5 June, 2017) both lead by Paul Blanchard.  For full details of the tours see: www.hiddenitaly.com.au/guided­tours/.  To reserve a place for the evening: info@maryrossitravel.com. 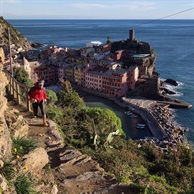 Sciacchetrail 2016 (Cinque Terre Marathon); 06.30, 20 March, www.sciacchetrail.com.  Only two days to go to one of the most demanding and spectacular marathons around.  Starting and finishing in Piazza Garibaldi in Monterosso (the first of the five villages of the Cinque Terre) this takes the 250 runners on a huge loop, through villages, vineyards and forest above some of the most spectacular coastline in Europe.  48 kms of running on narrow stone paths with plenty of steps and an accumulated ascent, this not for the feint heart.

Good Friday procession, Chieti (Abruzzo) 25 March.  Easter is huge in Italy, possibly more strongly felt than Christmas.  It is celebrated throughout the country with traditions that go back to the medieval period and beyond.  The oldest is believed to be in Chieti, dating from 842 AD.  It is held on Good Friday when a solemn torch lit procession of one hundred violinists (many children) playing Selecchi’s ‘Miserere’ wind through the town’s centre lead by a conductor with a glow-stick baton.

Sagra del Cinghiale (the Festival of the Wildboar);  Torrita Tevere (Lazio); 12.30 til late; 28 March.  Torrita Tevere (or the ‘tower on the Tiber River’) is just that - a lovely village dominated by a medieval tower in a crook of the Tiber River, 60 kms north of Rome.  Surrounded by the Tevere Farfa forest, wild boar has been a feature of the town’s menus for centuries and it is the centre piece of this food festival that falls on the last Sunday of March each year.

Umberto Boccioni, Genius and Memory,  Palazzo Reale, Milano, until 10 July, www.palazzorealemilano.it.  To celebrate the one hundredth anniversary of the death of Umberto Boccioni, one of the founders of the Futurist movement, this exhibition over 250 works of the master, including sculptures, paintings and drawings as well as a number of writings and douments that have only been recently discovered.

From Poussin to the Impressionists, three centuries of French painting from the Hermitage,  Palazzo Madama, Turin, until 4 July, www.palazzomadamatorino.it.  With over 80 masterpieces from the Hermitage in St Petersburg, this extraordinary exhibition reviews the history of French painting from the extravagances of Louis XV and Madame Pompadour to Ceazanne and the beginnings of the avant-garde.

From Kandinsky to Pollock, the Great Art of the Guggenheims,  Palazzo Strozzi, Florence, until 24 July, www.palazzostrozzi.org.  This important exhibition brings together more than 100 masterpieces from America and Europe the 1920s to the 1960s, in a journey that considers the relationship between the two shores of the Atlantic.

The weekend: skiing in the mountains above Bologna:

The Appenines run east-west across central Italy, separating Emilia-Romagna from Tuscany, Bologna from Florence.  Mt Corno alle Scale, a mountain of just under 2000 metres, sits in the middle of the Appenines, right on the border between these two regions, 65 kilometres south of Bologna.  Even though the ski fields of the Alps and the Dolomites are only a two to three-hour drive north, with its cute villages, forests, long runs, open spaces and welcoming, low-key hospitality (typical of these parts) the ‘Corno’ occupies a special place in the heart of the Bolognesi.

The Corno is an hour and a half slow drive from Bologna, following a road that gets smaller and windier as climbs up through the beech and birch forests to the national park until the forests give way to the rolling snow fields that come into view above you.

The Apennines are relatively low and slightly rounded, not as dramatic as the Alps, however, not being enclosed by soaring peaks does have some advantages including providing views, especially from the top of the Corno, that are extraordinary: you can see Monte Baldo (above Lake Garda) and the Brenta Dolomites, over 200 kms to the north; Mt Abetone and the Apuan Alps, over 100 kms to the west (on clear days also the sparkling Mediterranean and even the peaks of Corsica); while to the south you can see Monte Amiata and, on a good day, so the locals reckon, you actually can see Mt Vesuvius!

With its spectacular scenery, gentle skiing, rich history, and laidback life style, the Corno delle Scale is a perfect place to escape the tourist crowds, join the locals and enjoy a weekend the mountains, starting with a day or two in Bologna, one of the most fascinating cities in central Italy.

By train:  The easiest access is to take the ‘Snow Train’ from Bologna Centrale, a combined train and bus service that runs daily from 24 December to the end of March.  It includes a discounted day pass at 18 euro.  By car:  From Bologna, head south on the A1 autostrada, taking the Sasso Marconi exit on the right.  You then take the state highway, SS 64, to Silla, following the signs to Lizzano-Vidiciatico.  By plane:  The nearest airport is Gugliemo Marconi airport, 80 kms from Bologna, with a shuttle service into the city.

Bologna:  If you are starting your holiday in Bologna (which I strongly recommend) try the charming Hotel Cappello Rosso, a recently restored 4 star hotel, which has been in operation since 1375 - it is located behind the main piazza and has doubles from 175 euro.  The Ca Fosca Due Torre is a rather luxurious B&B near the city’s famous two towers, with doubles from 140 euro;  Da Beatrice B&B is a welcoming, and cheaper, alternative, doubles from 75 euro.

Corno:  The Hotel Helvetia in spar town Porreta Terma is the fanciest hotel in the central Appenines, a mix of Belle Époque and minimalist architecture, it has a breathtaking panoramic terrace and spars - doubles start from 210 euro.  Hotel Capriolo, a warm and welcoming 3-star hotel overlooking the main square of Vidiciatico, an historic villages close to the ski fields.  Rifugio Le Malghe lodge is the perfect place to stay in you want to sleep right at the top of the Corno delle Scale.  It is a relaxed convivial place at the foot of the ski slopes, renowned for its fine mountain cooking, a bed starts at 30 euro per person per night.

Bologna:  Famous for its cooking, Bologna offers dozens of excellent restaurants and trattorie.  Trattoria Spiga is one of the best, and has been serving the region’s finest since 1933.  The Marco Fadiga Bistrot is a fashionable restaurant nearby offering a modern interpretation of local cooking.  You could also have snack Tamburini (Via Caprare, 1) one of Bologna’s classic delis.

Corno:  Food is one of the joys of visiting the Corno delle Scale.  Among the mountain specialities you’ll find are forest foods such as chestnuts, mushrooms and ‘piccoli frutti’ (many types of wild berries).  The Antica Locanda Alpina in Pianaccio offers refined versions of traditional cuisine based on the best local produce: tortelli, tortelloni, pasta and beans, pasta with mushrooms, roasts with chestnuts and homemade desserts.  Trattoria Tibidi in nearby Lizzano offers classic dishes such as polenta with truffles and mushrooms, handmade fresh pasta and a good selection of grappas.  Rifugio Le Rocce is a historic ‘rifugio’ on the slopes of the Corno which has been recently been restored and serves the hungry skier robust traditional cooking, including polenta and grilled meats as well as light quick lunches for the skiers.

Skiing  The ski fields have been operating here for nearly fifty years.  The ski lifts are open from December to April.  The runs are long, wide and undulating but challenging enough for the young Alberto Tomba (local legend and former world downhill champion) to cut his teeth on.  Three peaks, the Corno (1945 mts), Mt Cornaccio (1881 mts) and Mt Cupolin (1853 mts), wrap around to create a natural amphitheatre, with the runs from these converging on Pian delle Pattane (1418 mts).  There are three 4-seater chairlifts, two two-seater chairlifts and one single seat lift.

There are over twenty kilometres of runs.  The gentler slopes fan out under Mt Corno, while the more challenging are to the east, under Mt Cupolino, where Alberto Tomba trained as a youngster.  Two ofvthe runs are dedicated to the champion: Tomba 1 and Tomba 2.  The Stadio dello Slalom is probably the most interesting run, while the Direttissima is the most challenging.


Snowshoe and walking:  Corno delle Scale is a national park and an area of great environmental interest, with abundant forests, highplains, rocky cliffs and lakes, as well as a rich fauna.  The  park authorities organise regular guided snow-shoeing excursions to explore the park during the season, including guided night walks under the moonlight, which leave at sunset and include a dinner stop at a mountain hut and return around 22.30.  The cost is 15 euros per person, including snowshoes but excluding the cost of dinner.


Driving:  Traders, pilgrims and herdsmen have been crossing and settling in these mountains for millennia, and many of the towns and villages in the area have long and rich histories.  You can start your tour of the area in Lizzano di Belvedere, a gorgeous stone village at the foot of the Corno, which has one of the oldest buildings in the municipality of Bologna: the VIII century church of San Mamante.  Nearby is Pianaccio, another attractive village, at the mouth of the Silla valley with stone houses excavated into rocky cliffs.  From here you drive to Monteacuto nelle Alpi, a charming village that sits on top of a hill, its medieval town plan still perfectly intact, and then on to Vidiciatico, the tourist ‘capital’ of the district, which has a pretty town square built around the 14th century church of San Pietro.  After driving up into the mountains through forests, past several other attractive hamlets, you come to the spectacularly sited Sanctuary of the Madonna dell’Acero, a Tuscan style church dating from the 16th century, which was built on the spot after shepherds were saved from a snow storm by a vision of the Virgin Mary.  The church was built in thanks and became a pilgrimage site.  The church is open on Sundays from 08.00 to 16.00.  From here you can wind your way back down to Lizzano for a delicious feed of mountain fare.