Welcome to our first newsletter for 2016, it includes aristocrats in Genoa, orange throwing in Ivrea, a bike circuit that rings Rome, Tuscany meeting the Xi’an warriors and a beautiful winter weekend in the mountains on the Swiss border.

After the great success of our inaugural Gardens of Tuscany in May last year, we are pleased to present our newest guided tour:  the Gardens of Piedmont tour, a magnificent two-week tour that starts with the royal palaces and gardens of the Savoy in Turin and finishes with the luxuriant gardens of Stresa and the Borromeo Islands on Lake Maggiore.  Booking are open now.  For full details, please go to our website:  www.hiddenitaly.com.au.

Battle of the Oranges, Carnivale in Ivrea, until 10 February www.storicocarnevaleivrea.it.  Possibly the most improbable celebration in Italy, Carnivale finishes in Ivrea (Piedmont) on Sunday February 7 with a choreographed battle of orange throwing involving 500 people. (the guys in the carts are the baddies, the best the goodies).  The climax of two weeks of festivities, the battle celebrates the city’s rebellion against a demonic tyrant of the 13th century and has been operating for centuries (beans were the original ammunition0.  A lot of fun, but take your own helmet and raincoat!


Rolli Days, Genoa, 2 + 3 April, 28 + 29 May, www.rolliestradenuove.it.   In April the port city of Genoa (‘La Superba’) celebrates its glory days in the16th century when it ruled the Mediterranean by opening the heart of the old city (the largest in Europe) to the public, with accompanying festivities.  The super-rich families displayed their wealth by embellishing the centre with extraordinary palaces, filling with works by the finest artists in Europe (the aristocratic residences were inscribed on a list known as the ‘rolli’ hence the name of the festival).  41 magnificent alaces in the Strade Nuove district were UNESCO listed in 2006.  Many of these (some still in the hands of the original families) will be open for public viewing – quite an event and a good excuse to visit this fascinating ‘salty’ old city.


GRAB Rome (the ultimate Roman cycle path), http://velolove.it/grab.  A unique way to enjoy the Eternal City is to hike a bike and follow a 45 kilometre circuit that rings the whole of Rome, starting on the ancient Appian Way and taking you past the Colosseum, the Vatican, along the Tiber River and through some of the city’s most famous parks.  Over 70% of the completely flat route twists and turns along pedestrian and cycling paths, with another 3 kilometres on sidewalks, while a further 7 kilometres winds along secondary roads.  Bikes and helmets can be hired from Topbike Rentals, Via Labicana 49, between Termini Station and the Colosseum (www.topbikerentals.com). 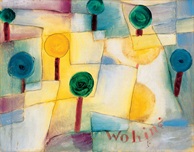 Paul Klee, Museo d’Arte Nuoro, Nuoro (Sardinia) www.museomanit, until 14 Feb.  Paul Klee was one of the most interesting and complex artists of the 20th century.  This important exhibition includes over 50 works by this celebrated Swiss-German artist, including paintings, watercolours and drawings coming from both private and public collections in Switzerland and Italy, with works from the 1920s and 1930s, including the masterpieces Wohin and Figurale Blatter.

Sandro Chia and the Warriors of Xi’an, Centro Saint-Bénin, Via Festaz, 27, Aosta, www.lovevda.it/en, until 8 May.  The exhibition covers a particular moment of the expressive research of one of the most important exponents of contemporary art, Sandro Chia (Florence 1946), who appeared on the international scene at the Venice Biennale in 1980 with a group of five artists who became known as the ‘Transavantgarde’.  Since then his work has been exhibited in major international exhibitions of art and prestigious museums such as the Metropolitan Museum in New York.  The Aosta exhibition is focused on the ancient mythical warriors of Xi’an (2200 BC), discovered in China in 1974.  In an operation of ‘Picasso-ian’ appropriation, Chia has transformed replicas of these extraordinary terracotta warriors - the result is a fascinating exhibition.

The Art of the Brick, Nathan Sawaya, Via Tirso 14, Rome, until 14 February, www.artofthebrickrome.it.  I know, it’s a bit cheesy but I can’t help myself – I love these little bricks and am mesmerised ed by Sawaya’s magical skills.  Covering a space of over 15,000 sq metres and using over one million lego bricks, the exhibition offers the visitor a variety of sculptures: from Rodin’s Thinker and the Chartres Cathedral’s north rose window, to a full size Tyrannosaurus skeleton – a bit of fun for everyone.

Macugnaga, a weekend in the shadow of Monte Rosa.

I discovered Macugnaga researching the Trails to Freedom hike three years ago.  It’s a series of small timber villages and hamlets on the Anza River at the head of the Anzasca Valley, tucked under the towering east face of Monte Rosa, which, at 4634 metres is the second highest peak in the Alps.  The ridge on the north side of the valley forms the border with Switzerland and there are hiking trails leaving Macugnaga that lead directly over the ridge to Zermatt and the Matterhorn.  These were the same trails that the Walser, the original German-speaking settlers, used in the 13th century.  It’s a quiet area of spectacular beauty and happily its relative isolation and long-standing building regulations has meant that Macugnaga has maintained much of its charm and many of its traditions.

It is a lovely place to spend some time in the summer but it is also a fantastic in winter, with two ski zones, 8 ski lifts, 30 kilometres of piste, 2 cross-country trails and a ski school as well as an extensive network of snow-shoe trails, one of which takes you right up under the east face of Mt Rosa.

By Car:  Macugnaga is 146 kilometres from Milan.  Take the A8 autostrada out of Milan and then the E26 toll road to Gravellona/Toce on the north of Lake Maggiore.  From here take the SS 33 highway in the direction of the Domodossola/Simplon Pass.  Take the Piedmulera exit on the left and then follow the SS 549 as it winds it way through the spectacular Anzasca Valley to Macugnaga.  By train:  Take a fast train from Milano Centrale to Domodossola and then one of the regular buses to Macugnaga, that leave from in fornt of the station (7 buses per day during the week, 2 per day on Sundays).  By air:  The closest airport is Milano Malpensa.

Dream Hotel (Via Monte Rosa 41) is the most modern hotel in Macugnaga, opened in 2013.  It has 13 room in ‘alpine’ style and costs from 60 euro per person per night, half-board.  Albergo Flora (Piazza Municipio 4) is a family-run hotel of long standing, overlooking the main square of the town.  It has rooms and apartments as well as its own ski school.  Prices from 55 euro, half board.  Residence Weissthor (Precetto Superiore village) is only 100 metres from the cable car to Belvedere.  It offers ‘alpine’ style apartments with fire places for 2 to 4 people.  A studio apartment for 2 starts from 60 euro per day.

As you may have noticed, most of the hotels require ‘half board arrangements (ie dinners included) however there are also some good restaurants in town.  Z’Makana Stubu (Via Monte Rosa 114) is a temple of traditional Walser cooking but it also includes modern, inventive dishes such as jazzini alla anzasachina (a bread based pasta) with onion, pancetta and toma (local diary cheese).  Flizzi (Piazza Municipio) with a pleasant outlook over Macugnaga’s central piazza and offers some traditional dishes such as a variety of fondus and the Blattu Fliesch, beef steak cooked ot the table on heated stones.  La Locanda (Precetto Supeiroe village).  Located in front of the cable car to Belvedere, this is the latest of a number of high quality, innovative restaurants to open in the area.  It has a limited menu which offers a range of ‘valley’ dishes based on locally produced meats and freshly made pastas.

What to do: Skiing

Macugnaga has two main ski zones, the sunniest is on the Monte Moro Pass (2868 metres, on the Swiss border), which can be reached via two cable cars, starting in Macugnaga.  The runs are long and require a certain level of skill:  the ‘Lago’ run, is 1500 metres long, starting from the top of the pass and heading down to the end of the first cable car lift (black and red).  ‘Meccia’ is an old style run of over 4 kilometres (red)  that is only open with heavy snow.  It also finishes at the end of the first lift.  ‘Pink Snow Park’ for the less experienced is a designated area at the top of the pass (blue).

The other ski zone, is Belvedere (2000 metres) at the eastern end of the valley, under Monte Rosa, and is reached via two chiar lifts from Precetto Superiore village.  There are two runs, the Belvedere is more technical, while the Ruonograbe is more panoramic (both red).

There are two cross country routes: the easiest follows the river in a loop out to Isnella, while the second, more demanding, leaves from the village Precetto.

What to do:  snow-shoeing.

There are many snow-shoeing options in Macugnaga.  The most spectacular leaves the Belvedere chairlift (2000 metres) and follows the Belvedere glacier up to Pedriola, where you can sit on the terrace of the Rifugio Zamboni mountain lodge (closed in winter) and admire the extra ordinary eastern face of Monte Rosa, which rises 2500 metres above you (the highest cliff face in Europe).  Longer, but less demanding, is the walk into the Quarazza Valley.  A well maintained trail follows the river out of Macugnaga to the village of Isnella and then into the Quarazza Valley,  First stop in the pretty Lago delle Fate (Fairy Lake) from here you can continue up the floor of the valley through forests to the old abandoned gold mines of Crocette.  A sunny option is to take the first cable car from Macugnaga to Monte Moro Pass, get out at the Alpe Bill and walk up to the Alpe Meccia, having lunch at the Rifugio Oberto-Maroli at the top of the second cable car.  The classic night route is a 45 minute walk from Precetto village to Alpe Burki.