July 2015: a skywalk in Milan; marble in Carrara and a fabulous weekend in Tropea the pret

Welcome to the Hidden Italy July newsletter.  The east coast of Australia might be in the grips of an unusually cold and wet winter but over in Italy the temperatures are climbing and the summer holidays are beginning.  We hope this edition will bring you a little sunshine!

In the July issue:  a skywalk from Milan's cathedral to the Teatro alla Scala; marble sculptures in Carrara and a fabulous weekend in Tropea (Calabria)  the prettiest (and most fashionable) beach town on the Tyrennian coast.

The Hidden Italy 2016 guided tours are open for bookings (click on the links on the left for details).

“My husband Geoff and myself experienced one of the best guided (if not the best) tours of Tuscany. The guide Paul Blanchard was superb: such a fun, informative and caring man, passionate about his subject and fantastic on imparting his knowledge.  What an amazing trip we had….  it was all we had hoped it would be.”  SR, Gardens of Tuscany  2015

We have a beautiful new brochure for 2016 (54 pages of colour photos and dreamy itineraries).  If you'd like a copy, please click on the link on the elft and send us your postal address.

Events in Italy in July

Highline Galleria, Galleria Vittorio Emanuelle II, Milano (tickets: 12 euro; www.highlinegalleria.com).  150 years after its inauguration, the spectacular Galleria Vittorio Emanuelle II (the towering glass arcade that links Milan’s gothic cathedral with the La Scala opera house) has been completely restored.  Lined with fashionable restaurants, caffes (including the original Campari bar) and stylish shops, the Galleria is known as the 'salon of Milan'.  The greatest innovation now is the opening of external walkways on the roof of the arcade (Highline Galleria) which offer extraordinary views (particularly at night) over the cathedral, opera house and the centre of the city.

Ravenna Music Festival, Ravenna, www.ravennafestival.org, until 27 July.  After a full program which started at the beginning of June and was dedicated to the 750th anniversary of the birth of Dante (who died in exile in Ravenna in 3121).  The festival reaches its grand finale at the end of July with three performances of Giuseppe Verdi’s opera Falstaff (23, 25 and 26 July) conducted by Riccardo Muti.

Exhibitions in Italy in July 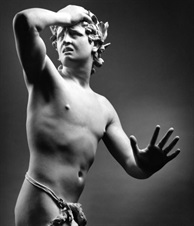 Canova and the Masters of Marble, Palazzo Cucchiari, Carrara (www,canovacarrara.it) until 4 October.  Carrara is a small town on the coast of northern Tuscany, celebrated throughout the centuries for the purity of the white marble quarried in the Appenine Mountains which sore above it (it was most famously the source of Michelangelo’s stone for all his great sculptures).  In collaboration with the Hermitage Museum in St Petersburg, Carrara is hosting an exhibition of 16 of the museum’s finest marble sculptures, including two extraordinary works by the greatest Neoclassical sculptor, Antonio Canova (1757 to 1822).


Vivian Maier, Street Photographer, MAN Museum, Nuoro, Sardinia (www.museoman.it) until 18 October.  For over 50 years, Vivian Maier (1926-2009) photographed the street life of New York and Chicago, leaving an archive of over 150,000 undeveloped negatives and super 8 films.  Discovered abandoned in a store room in 2007, journalist John Maloof, brought them to life – an extraordinary portrait of these two wonderful cities in their prime.  The exhibition includes over 120 photos and films from the collection.

A weekend in Tropea, the pearl of the South

Perched on cliffs overlooking the Tyrrenian Sea with views across ‘the infinite sea’ to  smoking peak of Stromboli and the other Aeolian Islands visible on the horizon on a clear day, Tropea is one of the most enchanting coastal towns in southern Italy.  It is an elegant and well-preserved town, with a laidback atmosphere, some excellent restaurants and caffes and a string of clean, sandy beaches running around the foot of the cliffs – a perfect place for a weekend (or more) in summer.

Like most of the towns along the coast of Calabria, Tropea has a long and rich history, dating from antiquity when it was part the ancient Greek world.  Given its enviable position, the town has always drawn people looking to relax and enjoy its enviable position. It became particularly popular with the local nobility in the 19th century, when it was part of the Borbon kingdom of Naples who built elegant residences here, giving the centre of the town an aristocratic atmosphere.

These days the life in summer takes place over two levels: the pedestrian lanes and streets of the town, with its bustling piazzas and nine lookouts and its port and beaches that wrap around under the 60 metre cliffs.  It is busy and buzzing but there are enough beaches to the south of the town to escape the madding crowd, if you want to.


How to get there:


Tropea is on the A3 autostrada that runs down the coast of southern Italy from Naples to Reggio Calbaria.  Heading south on this, take the exit for Pizzo Calabria and the state highway 522 for the 35 km drive to Tropea. Tropea station is on the secondary Lamezia Terma – Reggio Calabria line.


Hotel Rocca della Sena.  This romantic 4-star hotel has rooms with balconies looking out over the cliffs to the sea.  It also has one of the best cellarscin town, offering the finest Calabrian wines.  Doubles from 150 euro


B&B Potercole.  This charming bed and breakfast is in the heart of the old town in a little street that end at one the best lookout points.  It has four quiet modern rooms and serves an abundant breakfast of locally made goodies.  Doulbe from 120 euro.


Da Cece:  Situated in a quiet piazza in the centre of town, with a gazebo out the front, this lovely restaurant serves spaghetti featuring Tropea onions (sweet red onions that are the town’s proudest speciality) as well as fresh grilled fish.  Meals from 30 euro.


Il Normanno:  This restaurant has a terrace with beautiful views over the roofs of the old town and down over the port.  It’s specialities are ‘pitta’ a focaccia-type bread that is filled with anchovies, onions, olives and mozzarella and eggplant involtini.  It also serves fresh home-made pastas.  Meals from 30 euro.
Enogastronomia Lorenzo:  Also in the centre of town, this wine bar showcases the best of the local wines, accompanied by the best local delicatessen goods.  It’s the ideal place to get an gourmet lunch to take to the beach.


Saturday morning:
Go for a walk through the town, starting at Corso Vittorio Emanuelle.  You can have a break outdoors at the Royal Bar Filardi, Tropea’s oldest, where you can try their ‘sciu’ large puff pastry balls filled with cream.  From here you can visit the town’s cathedral and the cathedral’s museum before wandering through the lanes lined with elegant noble palazzi, pausing at the Café de Paris for a lemon granita or coffee.  In Via Laursa you can visit Palazzo Toraldo di Francia, a family residence which has poreserved its interiors and a family archive.  Another Palazzo Toraldo, in Largo San Michele, holds two copies of the ‘Book of the Privileges of Tropea’ 17th century tomes that list the nobility of the town and their rights.  4 sets of stairs lead from the centre down to the waterfront, from where you can visit the recently restored little church of Santa Maria d’Isola, which sits spectacularly on the tip of small promontory joined to the beach by a narrow isthmus.


Saturday afternoon:
Time to hit the beach.  July and August is peak season but there enough beaches to spread the crowds and if you are energetic you can even find some space to yourself along the beaches to the south.  At the Lido La Munizione you can not only enjoy the water but also sip some well-chilled Calabrian wines watch the passing parade.  Continuing along the coast you come to the Mare Piccolo, the town’s most celebrated beach and then beyond this under the cliffs of the town, Linquata, which takes its name from a small that runs parallel to the beach.  La Spiaggia del Convento, with an old convent overlooking it, is the widest and longest beach in the area, with a number of beach clubs, including the Lido Acquamarina and Lido Tropical, where you can enjoy an aperitif and watch the sun go down.


Sunday morning:
The castle of Galluppi-Toraldo, 7 kilometres into the hinterland of Tropea, is the starting point of a number of walking trails organised by the Associazione Antico Sentiero (Association of the Ancient Trail) which costs 35 per person for the day and includes a delicious lunch.  The route follows a mule-trails through the Fiumara della Ruffa valley and then on to the Via dei Mulini, a trail that passes along a river still lined with the remains of old watermills.


Sunday afternoon:
Hire a rubber dinghy from the port of Tropea and explore the coastline, heading for Capo Vaticano, with its isolated beaches and good snorkelling (they can be hired from Sea Passion for 20 euro).  Enjoy ‘Stromboli by night’ taking a motor boat from the port which crosses the straight to the Sicilian island of Stromboli, a still active volcano.  The boats leave at 3.00 pm, crossing 50 kms to the island, where you can get off with time to swim and explore the towns and villages.  When dark falls, the boat circles the island stopping opposite the lava flows (the peak is 920 metre) before returning to Tropea at midnight.


Otherwise, you can take the train south to Reggio Calabria, the capital of the region (which has ‘Italy’s most beautiful waterfronts’) and visit two of Italy’s great archaeological treasures: the Bronzes of Riace (two extraordinary bronze Greek statues dating from the 5th century BC that where drawn up from the sea floor by fishermen over 30 years ago).