May 2015: Expo in Milan, Biennale in Venice, Baroque in Rome and a lovely weekend in Valpollicella.

Welcome to the spring 2015 edition Hidden Italy’s newsletter.  It’s a big year in Italy with megaevents such the Expo in Milan, the 56th art Biennale in Venice and the Baroque celebrations in Rome.  To balance this we have included info for a lovely weekend in Valpollicella, a lovely valley between Verona and Lake Garda. – we hope you enjoy it!

We have just finished a fabulous tour in Puglia, pure southern Italy.  Well off the beaten track, Puglia is not the easiest place to explore, but it has much to offer, particularly in spring when it is carpets in wildflowers: easy walking trails lined with dry-stone walls winding through rolling hills covered in cherry orchards and olive groves; Baroque villages and towns; sparkling coast line and some of the finest food in Italy.  Places available for next year:  6 to 18 May 2016.

Expo 2015  (Milano, until 31 October, www.expo2015.org).  The big event of the year is the World Expo 2015 opened to a bang in Milan on May 1.  The theme is ‘Feeding the Planet, Energy for Life’, with 130 countries participating, each building a pavilion exploring ideas around technology, innovation, culture, traditions, creativity and the right to secure, healthy food for all the planet, with plenty of good food to be had along the way.  A day ticket costs 39 euro per adult.

Il Palio di Ferrara (Ferrara, 31 May, www.paliodiferrara.it).  Ferrara is a gorgeous town not far from Bologna.  The Palio di Ferrara is one of the oldest horse races in the world.  The first palio was introduced through the streets of the city in 1279.  It was a regular mainstay until 1600. In 1933, the event was launched again and continues to be a key celebration in Ferrara's annual calendar.  The race pits the eight districts of Ferrara against each other - it's run with a feel for the historical.

Baroque on the Lagoon, San Giovanni Evangelista, Venice, www.venicemusicproject.it; until 8 November.  With an unlikely motto (‘We will, we will, Baroque you’) the Venice Music Project has put together a series of concerts that celebrate the music of the 17th century featuring Venetia Antiqua¸ an ensemble of musicians of international standing led the German soprano Liesl Odenweller.  The concerts will be held throughout 2016 in the beautiful church of San Giovanni Battista.  Booking via the website. 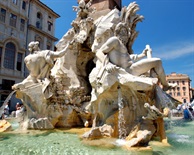 Baroque in Rome, and the Wonders of the Arts, Fondazione Roma Museo (until 29 July, www.mostrabaroccoroma.it).  With over two hundred works by some of Italy’s greatest artists, including Bernini, Boromini, Pietro da Cortona and Guido Reni, this exhibition tells the extraordinary story of Rome in the 17th century, when extravagant and all-powerful Popes transformed the Eternal City.  It includes masterpieces drawn from Italian and international institutions (the Uffizzi, the Louvre, the Hermitage and the Prado museums).  There is a series of satellite events including conferences, concerts, exclusive tours to the Vatican museum.and the Doria Pamphili gallery; access to sites normally not open to the public; and finishing with an historical regatta along the Tiber and fireworks from the Castel Sant’Angelo on 29 July.

Leonardo:  1452 – 1519; Palazzo Reale; Milano until July 19, www.skiragrandimostre.it/leonardo/).  This major exhibition is the one of star turns of this year’s Expo.  Leonardo da Vinci spent much of his working life in the court of the Dukes of Milan (home of the Last Supper and an excellent museum dedicated to the Tuscan master).  The exhibition investigates some of the many facets of his genius.  It includes original codices, over 100 autographed drawings, designs and sculpture collected from the great museums of Italy and internationally (including the British Museum, The New York MET and the Louvre) - well worth a trip on its own!  Due to demand, the exhibition is open til midnight each day.

La Biennale Arte, Giardini and Arsenale, Venice (until Nov 22, www.labiennale.org).  The 56th edition of the Venice Biennale International Art Exhibition opened this month.  It comes with the title ‘All the World’s Futures’.  Curated by Okwui Enwezor, the 89 participants include Grenada, Mauritius, Mongolia, Republic of Mozambique and Republic of Seychelles, all of whom will be displaying for the first time.  A statement puts this year’s title into perspective: ‘Our aim is to investigate how the tensions of the outside world act on the sensitivities and the vital and expressive energies of artists, on their desires and their inner song’.  A two-day ticket costs 30 euro.

With all the mega-events in Italy this spring, a quiet weekend exploring one of the hidden treasures of northern Italy wouldn’t go astray.

Only twenty kilometres north of Verona heading towards Austria, the Valpollicella (or the Pollicella Valley), lies east of Lake Garda, between the Adige River and the Lessini Mountains.  It is a land of rolling hills, vineyards, pretty villages with ancient churches, and historical villas surrounded by some of Italy’s finest vineyards, the perfect place to spend a weekend in spring.

When Venice lost control of the eastern Mediterranean Sea to the Ottoman Turks in the 16th century, many of the nobility turned their interest inland to the ‘terra firma’, investing in extensive estates that were crowned with some of the finest villas of the Renaissance, designed by architects such as Andrea Palladio.  One of the most interesting of these sits in heart of the Valpollicella and has recently been restored and opened to the public, offering three sumptuous rooms with views over some of vineyards in the district, a perfect base from which to explore this fascinating area.

The Villa della Torre was designed by Giuglio Romano and completed in 1560.  It is a sprawling complex that was developed on three levels, representing a metaphoric journey from the Inferno (a series of artificial grottoes deep in the gardens) to Paradise (‘Il Tempieto’ a small Renaissance gem designed by the Florentine architect Michele Sanmicheli).  The villa remained a private residence for centuries until it was bought by the Allegrini family in 2008, who had owned and worked the surrounding vineyards for generations.  In 2010 it opened its doors to the public.


Car:  Leave the autostrada A4 (which links Venice and Milan) at the Verona Nord exit and take the State highway 12 following the signs to Brescia/Trento before taking the turnoff for San Pietro in Cariano/Valpollicella.  Train:  From Verona station, take the bus 21 for Negrar (timetables at www.aptv.it).  Air:  The nearest airport is Verona Catullo.


Villa della Torre (Fumane, Via della Torre 25, tel:  045 683 2070).  Three generous rooms (another seven are planned to open by the end of 2015) with antique furnishing and a rich breakfast of local produced produce served in the Peristilio (the central courtyard) or in the ‘salon of the fireplaces’ in the colder months.  Double room from 200 euro.

Antcio Casale Bergamini (Garagagnago, Via Stazione Vecchia 764, tel:  392 878 7404).  Charming accommodation in a 17th century farmhouse with six elegant rooms and three suites, a garden and a swimming pool.  Open in the warmer months from mid-March.  Doubles from 120 euro.

Saturday morning:
A morning exploring the grand villas of the valley.  After a guided tour of the Villa della Torre, we’d recommend spending the morning visiting the magnificent neoclassical Villa Mosconi Bertani, with 18th century frescoes, which is surrounded by parkland with centuries old trees, a small lake and a coffee house.  Another jewel is the nearby Villa del Bene, which has frescoes from the 1500s.

Saturday afternoon:
The Valpollicella is synonymous with fine wines.  The most famous is also one of the youngest: Amarone was launched in 1940.  The story goes that a local producer failed to stop the fermentation process of a vat of the local sweet Recioto wine, resulting on all the sugar being transformed into alcohol and so the big red was born.  Whatever the truth, Amarone is the most famous of the valley’s wines.  The slopes of the valley are covered by rows of neatly organised vines, supported by ‘marogne’, the dry-stone walls that characterie the area.

Fortunately, the wineries are quite close to each other so you won’t have to travel far to learn the secrets of the local product.  We’d suggest starting with a guided tour of Viticoltori Tommasi to see the process on vinification, a visit to the historical cellars and degustation then continuing on to Viticoltori Speri, whose 60 hectares if vineyards have been in the family for seven generations.  You could also squeeze in a visit to the nearby Azienda Agricola Contra Malini of the Tezza family.

Sunday morning:
Being near the foothills of the Alps, with Austria over the other side, the Valpollicella has a long history.  It is scattered with ancient churches and chapels many of which have spectacular setting seeking these out makes for a very rewarding mornings drive.  The hamlet of San Giorgio in Valpollicella is perched on a peak with spectacular views over the nearby Lake Garda, it’s parish church has cloisters and frescoes dating from the 11th century.  From here you drive to the village of Arce with its 12th century chapel dedicated to San Michele and then finish at 19th century sanctuary of the Madonna de la Salette, which has spectacular views over the valley.

Or, for something a little more relaxed, you could always spend the morning being pampered at the Aquagardens, a new ‘wellness’ centre, which draws on the hot thermal waters that run underneath the valley.  It offers large indoor and outdoor pools with waterfalls and fountains, it offers hydromassages, Turkish baths, hot sand beds and a poolside bar service.

Sunday afternoon:
An afternoon outdoors, exploring the Parco delle Cascate di Molina.  An oasis of over 80 hectares, the Molina Falls Park is a national park criss-crossed by walking trails of varying grades with lakes, waterfalls and forests.  For this and other activities, get in touch with Valpollicella Adventure or the mountain bike guide Giogio Bonafini.