Welcome to the Autumn 2013 edition of the Hidden Italy newsletter: World War II escape trails; futurism; the world’s biggest pizzeria and a cycling weekend in Venice…  we hope you enjoy the read.

In the World War II, Italian partisans called them ‘sentieri della liberta’ or ‘the trails to freedom’, long forgotten medieval paths through the mountains that they had reopened to get Allied servicemen, mostly escaped POWs and downed pilots, out of Fascist Italy and into neutral Switzerland.  In October 1943, four Australian soldiers took one of these trails, leaving Biella in the foothills of the Alps north of Turin, crossing the Swiss border at the Monte Moro Pass eight days later and dropping down to the village of Sass Fee, in a valley next to Zermatt.  I will be doing the walk next week, following in the footsteps of the young Diggers as best I can!  For full details see our new blog (www.hiddenitaly.com.au/whats-on/news).  Coverage permitting, I’ll be posting daily during the walk on Facebook (www.hiddenitaly.com.au/whats-on/blog). 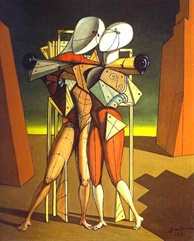 Giorgio De Chirico, Mystery and Poetry; Castello Aragonese, Otranto, Puglia, until 29 September.  Giorgio De Chirico (1888 to 1978) was one of the major Italian artists of the 20th century.  He was known as the Master of Metaphysics.  His large paintings of surreal cities and isolated individuals strikingly capture the alienation of the 20th century have become icons of the modern malaise.  11 paintings, 3 sculptures and over 30 drawings are on display in the castle of this enchanting port town.

Seguso Vetri d’Arte,  Museum of Glass, Murano, Venice, www.segusovetridarte.com, until 29 September.  Over two hundred pieces of extraordinary quality, including prototypes and rarities, tell the story of one of the finest producers of glass in the 20th century.

Paladino/Ravello;  Villa Ruffoloa in Piazza dell’Auditorium di Oscar Neimeyer, Ravello,  www.ravellofestival.com, until 31 October.  Mimmo Paladino was born in 1948 and was one of the members of the Transavanguardia, a ‘neo-expressionist’ movement that rejected the prevailing minimalism and reasserted the importance of painting.  As part of the annual Ravello Festival over 60 of his works, including twenty monumental sculptures are exhibited within Ravello’s extraordinary Auditorium, designed by Chilean architect Oscar Neimeyer, and its surrounding parks.

Pizza on the Waterfront, Naples, www.pizzavillage.it, from 3 to 8 September.  To celebrate its most famous product, Naples will host the largest pizzeria in the world.  Covering over 24,000 square metres and with 42 ovens producing 50 pizzas a minute, the ‘pizzeria’ will be stretch along Via Caracciolo on the city’s waterfront.  The prices are great too: only 10 euro for a pizza, drink, sweet and a coffee.

Festival of the Via Francigena, throughout Italy, www.festivalviefrancigene.org, until 30 September.  Inspired by the success of the Camino to Santiago di Compostella in Spain, Italian walkers are finally rediscovering the rich heritage of the Via Francigena, the medieval trade and pilgrim route that linked Canterbury to Rome.  The Via Francigena Collective Project have organised a program of over 230 events throughout the peninsula, from Aosta on the French border to Puglia in the south, including exhibitions, guided visits and walks.  Details are in the program on the website.

Ancona, a Crossways of Cultures, Ancona, www.adriaticomediterraneo.it, 24 to 28 August.  Ancona has for millennia been a strategic port on Adriatic coast, a centre of trade and cultural exchange, especially with the Balkan countries across the water.  To celebrate the city’s 2400th anniversary (!) and to celebrated the entry of their neighbour Croatia into the EU, Ancona is hosting an extraordinary festival, dedicated mostly to music, of all kinds: including jazz, classical, contemporary and the wonderful, impulsive folk music from Puglia, the pizzica tarantella..

A weekend cycling in Venice?  It doesn’t sound possible but there are over 40 kilometres of cycle trials between the two outer islands of Lido and Pellestrina (round trip).  It is a peaceful and fascinating way of exploring another face of the lagoon.  These two thin islands stretch from Punta Sabbioni in the north to Chioggia in the south, a thin strip of land that encloses the lagoon, with views of Venice in the distance on one side and the Adriatic on the other.

While the northern end of Lido is a bustling centre, it’s easy to escape, either taking one of the local buses that rattle the lengths of both Lido and Pellestrina, island hopping its way to Chioggia and back or, better still, hiring a bike in Lido town and riding south along the water front, taking a short ferry ride to Pellestrina and back.  You’ll pass through long stretches of farming land, go past hidden agriturismi (farm stays) and visit sleepy fishing villages, one of which, Malamocco, dates from Roman times and was actually the capital of the lagoon in the Middle Ages.

I loved my weekend exploring this forgotten part of the lagoon but if you haven’t got the time, a day trip cycling around Lido is a wonderful complement to the hustle and intensity of Venice.

Regular traghetti connect Venice with Lido: number 1, 2, 5.1 and 6 starting from Piazzale Roma or from Sant Lucia railway station, a thirty minute ride down the Grand Canal, pat St Marks Square and then out across the lagoon.  If you are coming from Chioggia (the fascinating little port on the south side of the lagoon) you take the number 11 ferry, which goes to Lido via Pellestrina.

The Grand Albergo Ausonia and Hungaria in Lido town is a classic 4-star hotel that captures the charming retro air of Lido’s turn-of-the-century heyday.  A double room starts at 130 euro per night.  The Victoria Palace Hotel is another good 4-star hotel in Lido preserving the atmosphere of days gone by.  For a very different Venetian experience consider Country House Le Garzette, a lovely agriturismo surrounded by small vineyards and market gardens, near Alberoni on the south of Lido island.  The Rezidenza Ca Alberti is a small hotel in an 15th century in the hamlet of Malamocco, double from around 100 euro.  While, f uou decide to stay in Pellestrina, the only option on the whole island is the ‘ittiturismo’ Le Valli, which has six well-appointed rooms in a natural setting, starting from 70 euro a night.

Friday evening:
Assuming you are staying in Lido, we suggest settling into your hotel and then exploring Lido town.  From the ferry wharf head down the Gran Viale Santa Maria Elisabetta, the most lively street on the island, full of shops and restaurants until you reach the Lungomare Marconi and the sea.  Since its begins as a seaside resort in the late 1800’s, this stretch has maintained the atmosphere of an upmarket resort, lined with the grand hotels of the era on one side and a beach, lined with kiosks the famous capanne, or bathing cabins, on the other.  Byron used ride horses along this beach (the story that he swam out here from St Marks Square, of course) and Thomas Mann found the inspiration for his book Death in Venice while convalescing at the Hotel Des Bains.  After your stroll, try dinner at Ai Murazzi, a unique restaurant set in a small timber building with seafaring decorations and marvellous views out over the retaining walls and the sea – meals for around 30 euro a person.

Saturday morning:
Go cycling (although this itinerary can also be done using the local bus service, number 11, which runs the length of the island and back again, starting from the ferry wharf and finishing at Alberoni, from where you can catch the ferry to Pellestrina and back).

If you do both islands, the total itinerary is 20 km each way, 11 kms along Lido island and then 9 kms along Pellestrina island.  Bikes can be hired on Lido in Piazzale Santa Maria Elisabetta, in front of the ferry wharf at a cost of 8 euro per day – you can also pick up a map here.  If you are setting out in the other direction from Chioggia, bikes can be hired at the Pellestrina petrol station for 10 euro per day.

Leave the piazza, head back down the Gran Viale and turn right down Lungomare Marconi (being careful to avoid any movie stars who may be here between August 28 and September 7 for the annual Venice Film Festival).  At the end of the Lungomare, you come to the Murazzi, the retaining walls that were built in thew 17th century to protect the island, and Venice, from the sea.  After leaving the town and peddling for 5 kms you come to the charming little port of Malamocco, one of the oldest settlements in the lagoon (it has Roman origins) and the capital of the Duchy of Venice from the 8th century to the 10th century, when they moved the capital to its current, nd better protected, location.  There is an excellent little restaurant here, the Trattoria Al Ponte di Borgo, where you can taste some wonderful Venetian culinary specialities in a simple and very amiable ambience.

From Malamocco, keeping peddling (all very easy as you follow mostly small roads without a hill in sight) until you get to Alberoni at the southern tip of the island, where there is a small nature reserve.  From here you can load your bike on to the ferry for the short hop to Pellestina island, on the way passing the impressive structures of Moses, the mobile locks, designed to protect Venice from the rising tides.

Saturday afternoon:
Pellestrina is a fishing island, 11 kms long and very narrow – barely 100 metres wide in parts.  Riding down the lagoon side of the island you pass through numerous little fishing settlements, with small canals and pretty coloured houses until you get to the little hamlet of Pellestrina itself.  At the southern tip of the island is Ca Roman Oasi, a small bird sanctuary which you can visit.  The best place for lunch on the island is Da Memo, at Porto Secco, between Pellestrina village and the northern end of the island.  Having finished you visit to Pellestina ride back to the ferry for Lido and head back to you hotel.

Saturday evening:
Two options for those felling cashed up: a night at the casino on Lungomare Marconi or, for something completely different, and spectacular, walk up to the Airport Nicelli (Venice’s first and only airport) from where you can catch up a helicopter with Heliair and view Venice and the lagoon from on high.

Sunday morning:
After an exhilarating and energetic day, it’s probably time to chill out on the beach.  The beach is sandy and wide and the water quite clean and popular mostly with Venetians.  There are a number of free sections but the classic way to do it is to hire one of the numerous capanne, small beach cabins that can even have verandahs.  They don’t come cheaply: at the Quattro Fontane you can spend from 44 to 122 euro per day, depending on the season and which row you are in!  The ‘Tahitian’ umbrellas and mini-cabins at the Hotel Des Bains’ beach can cost from 50 to 205 euro per day, although there is a 50% discount for after 2.00pm.

Sunday afternoon:
For something different, you could visit the glass factories on the nearby island of Murano, which involves catching the traghetto number 5.1 to Le Fondamenta Nuove on Venice and then the 4.1 or 4.2 to Murano.