Spring 2013: Titian Slow Fish festival and a weekend in a hidden valley near Trento.

Welcome to the Spring edition of the Hidden Italy newsletter: Titian, the master of colour in Rome; Slow Fish festival in Genova and a weekend in a hidden valley in the northern mountains near Trento.

To celebrate our 20th anniversary next year, we introduced several new guided tours.  The spring tour to Sardinia (May/June 2014) but there are still places available on the other two, both in the autumn:

Sicily in the autumn:
This two week tour explores the ‘other’ Sicily: the remarkable south and west, which contains some of the most ancient and celebrated sites some of the most dramatic landscapes and some of the best food on the island.  The tour starts on 22 September and finishes on 4 October, 2014. 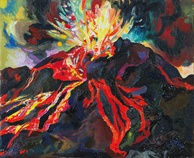 Renato Guttuso: Realism and Actuality (Museo Regionale, Aosta, Val d’Aosta, www.guttuso.com) until 22 September.  Renato Guttuso was the major exponent of Realism in Italy in the 20th century.  His vivid paintings were inspired by the colour and vibrancy of his native Sicily and his lifelong commitment to social justice and the Communist ideals - his acceptance of absolution on his deathbed was a national scandal.

Titian, Master of Colour (Scuderia del Quirinale, Rome, www.scuderiequirinale.it) until 16 June.  Titian, the great Venetian painter (1480 to 1576) is the protagonist of the most important exhibition in Italy this spring.  Over 40 of his masterpieces from collections throughout Europe (including the Uffizi, the Louvre and Prado) track the master’s evolution from his apprenticeship in the workshops of Bellini and Giorgione to the giant religious paintings commission by the Doges to his career as a portrait painter of the European nobility.

Arnoldo Pomodoro:  Works 1954 – 1960 (Fondazione Arnaldo Pomodoro, Milano, www.fondazionearnaldopomodoro.it) until 30 June.  Pomodoro’s intricate bronze sculptures grace public spaces throughout the world, including the UN Building in New York.  This exhibition, hosted in a new space adjacent to the artist’s studios in a restored factory in the canal district of Milan) documents the artist’s early year with 28 works in lead, bronze and silver.

Slow Fish 2013 (Porto Antico, Genoa,  //slowfish.slowfood.it) 9 to 12 May.  Sponsored by the Slow Food Association, this annual event not celebrates the wonders of seafood but also aims to educate and promote a more responsible and sustainable use of this precious and dwindling resource.  The lanes of the Genoa’s old port and filled with market stalls for the thre days of the event brimming with fresh fish (though no endangered species such as tuna, sword fish and shark); 16 of Italy’s finest chefs will present new recipes and cooking techniques, while a series of 14 various workshops are dedicated to the conservation of marine ecosystems and aquaculture.

Restitution 2013:  (Museo di Capodimonte, Naples, www.restituzione.it) until 9 July.  Italy’s vast artistic and archeological heritage has always relied on private patronage to supplement state funds (even more so in the current economic crisis).  The bank Intesa Sanpoalo has been a major sponsor since 1989.  Every two years its achievements in a grand exhibition, this time in Naples where over 250 restored items will be on display, including works by Canova and Gaudenzo Ferrari and numerous saved archeological pieces.

Club Alpinista Italiano 150th Anniversary, www.cai.it, various locations throughout Italy for all of 2013.  The Club Alpinista Italiano is one of the venerable institutions of Italy.  Founded Qintino Sella on October 1863 in Turin, it was modeled on the English Alpinist Club, founded several years earlier in the heyday of the European mountaineering and the conquest of the Alpine peaks.  The club has evolved into a network of 489 voluntary branches with over 300,000 members throughout Italy who have been responsible for preserving much of Italy’s natural heritage.  Many of the trails that Hidden Italy walks follow were pioneered and way marked by CAI.

For centuries the armies of Venice and the Austro-Hungarian Empires fought to control the Vallagarina, the valley that follows the Adige River north from Verona up to the Brennero pass and the Austrian border.  The valley has been a critical military and trade link since Roman times and is lined with castles, the most impressive of which is the Castel Beseno, a vast fortification that dates from the Dark Ages and covers a whole mountain top.  Behind it spreads the beautiful high plains of Folgaria, leading to Asiago and the Seven Comunes.  In front of it, down in the valley, runs the Adiges River and beyond this a smaller valley leading through mountains to Lake Garda.  16 kms up the valley is the historic city of Trento, while 12 kms to the south is the smaller city of Roveretto with its celebrated modern art museum MART.  The two cities are connected by an easy cycle way that follows the banks of the river through vineyards and apple groves.  Castel Beseno offers a focal point for a marvelous weekend exploring the Trentino region, at its best in the spring.
‘
Where to stay:

Agriturismo Salizzoni (Calliano, the village below the castle) offers hospitality in a 17th century villa surrounded by vineyards.  Rooms cost 70 euro per day and include abundant breakfasts based on home-grown produce.

Relais Palazzo Lodron (Nogaredo, a small town 5 kms down the river from the castle) has luminous rooms with four-poster beds in a medieval place where witch trails were once held.  Cost for a room b&b start from 120 euro a day.
Agriturismo Mas Brenta (Roveretto, localita Mas Brenta di Noviglio).  Enjoy the silence and nautral setting in a hamlet that was completely abandoned in the 1970s and recently reopened after 7 years restoration.  Rooms from 75 euro b&b per day.

Friday evening:  Settle into your hotel and have a delicious dinner in one of the many good local restaurants as an introduction to Trentino cooking, for example the Ristorante Aquila in Calliano (Via Tre Novembre 11) which offers fine regional cooking, a combination of Italian and Austrian traditions, including such classics as barley soup and apple strudel.


Saturday morning:  Visit the Castel Beseno.  This magnificent castle is the largest in the Trentino region and covers over 16,000 square metres.  It was first documented in 1190, although its origins are probably far older than this.  It passed into the hands of the von Trapp dynasty in 1470 and was transformed into a complete Renaissance fortress, an inexpugnable fortification that controlled trade and armies travelling between northern Europe and the Mediterranean world but also an elegant residence.  With the death of the last von Trapp in 1794, the castle was abandoned.  In 1974 it came under the control of the Province of Trento and was reopened to the public in 1988.  Today it houses a number of excellent museums (including a floor dedicated the medieval food and cooking) and an extensive bookshop.  It also hosts a number of annual festivals, the most important of which is held in August.  The views from the parapets is spectacular, taking in much of the eastern Alps and the Dolomites.

Saturday afternoon:  The Vallagarina is famous for its cold-climate wines including the white wines Marzemino and Schiava and the classic red wine Lagrein.  After a light lunch explore the vineyards of the area, many of which can be individually visited, or you can try the full range at either the Casa del Vino della Vallalgrina in Isero or at the Cantina Mori Colli Zugna in Mori.  The Vallagarina also produces an excellent grappa which can be tasted and bought from the Distilleria Marzadro in Nogaredo.

Saturday evening:  After a passeggiata and aperitivo in this pretty town we’d suggest dinner at the Locanda D + D, near Nogaredo, at localita Maso Sasso.  This restaurant offers a modern interpretation of Trentino cuisine, including a delicious cheese ‘sformato’ flavoured with wild herbs and a chocolate semi-freddo with mint.


Sunday morning:  After the indulgences of Saturday, Sunday morning is the opportunity to get out and enjoy the natural beauty of the Vallagarina.  There are a number of well marked walking trails in the area including the ‘Sentiero dell’Arte’ a 16 kilometre trail that links the villages of the Vallagarina, starting at Besenello finishing at Calliano.  Otherwise, there is a lovely 52 kilometre cycle way that runs along beside the Adige River, winding through vineyards and orchards, connecting Roveretto and Trento.  Bikes are available for free rent from ‘Centro in Bici’ in Roveretto.  Maps and full details of these and more itineraries are available from the Tourist Office in Roveretto, where you could also pick up the ingredients for a picnic from one of the sevarl very good ‘alimentari’ in the town.

Sunday afternoon:  Trento is the most important centre in the region: it is a vibrant university,  was the seat of the Bishop/Princes who ruled the area during the Middle Ages and hosted the Council of Trento during the 16th century when the Roman Catholic church developed its response to the Lutheran rebellion in north Europe.  It has many interesting sites including the cathedral, with its medieval frescoes; the bishops’ palace and the grand Castle of the Buonconisiglio.  While Roveretto to the south also has a long history it is best known for its exceptional Museum of Contemporary and Modern Art (MART)

Sunday evening:  To round off your visit, we suggest dinner at the Osteria San Colombano (Rovereto, Via Vicenza 30) a traditional osteria (or inn) with delectable dishes based on fine local produce such as risotto al Marzemino (a robust local white wine) and brasato ai finferli (braised beef with pine mushrooms).