November 2021: magic realism; a drone over Pompeii and weekend in a valley on the French border.

Events in Italy in November: 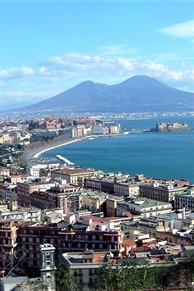 A Drone at Pompeii (https://www.youtube.com/watch?v=6eL92E8hBlM).  A taster for our Naples and Campania tour in May next year.....  In 1971, English band Pink Floyd played a live concert without an audience in the spectacular amphitheatre in Pompeii.  One of the songs, Echoes, provides the soundtrack for this short film, shot by a drone in and above the ruins of Pompeii.

Mercato Centrale (Stazione Centrale, Milano; www.mercatocentrale.it).  After Florence, Rome and Turin, Milan will have its own food emporium at its major railway station.  The development is part of the renovation of Milan’s spectacular railway station and will host twenty-nine food specialty shops including a fishmonger with Fish Bar, and a butcher featuring Tuscan delights.  There is also a cooking school and a presentation space.

Domus Augustana, Palantine Hill, Rome (www.parcocolosseo.it).  Water was very important to the ancient Romans.  Since 2019, a project has been under way to recuperate the lost fountains on the Palatine Hill.  The latest to be restored and reactivate is the Fountain of the Pelte in the heart of the emperor’s palace.  Accompanied by music and scents it is entitled Instar aquae tempus (time flows incessantly like water).

Exhibitions in Italy in November 2021:

Magic Realism: An Italian Style (Palazzo Reale, Milano, www.palazzorealemilano.it; until 27 February).  This major exhibition captures a fascinating period in Italian art between the two world wars when there was a ‘return to order’ after the experiments and disruption of Futurism and Expressionism but the seemingly mundane subjects of this style are imbued with undeniable magic.  80 works by masters such as Carlo Carra, Felice Castorati and Arturo Martini.

Monet.  Dal Musee Marmottan Monet, Paris (Palazzo Reale, Milano, www.palazzorealemilano.it; until 31 January).  Speaking of magic, the Palazzo Reale is also hosting a fabulous exhibition of 53 masterpieces by Monet, on loan from the Muse Marmottan Monet, which holds the largest collection of works by this master of Impressionism.

Escher.  (Palazzo Ducale, Piazza Matteotti, Genova; www.mostraescher.it).  This is the largest retrospective ever held in Italy of the Dutch genius Maurits Cornelis Escher, a master draughtsman much loved for great capacity to play with perspectives.  There are over 200 works present plus a multimedia salon where you can literally work inside his magical structures.

Hidden Italy weekend: A weekend in Valle Maira, a hidden valley on the border with France.

The Valle Maira doesn’t go anywhere.  After forty kilometres of steep rises and twisting curves, the asphalt finishes at Chiappera, a clutch of stone house, ringed by a wall of rugged stone mountains.  Beyond the hamlet, a long, steep hiking trail climbs up to the highest of the mountains, Rocca Blancia, 3193 metres asl, which marks the border into France.  Occitan, also known as langue d’oc, a medieval version of French, is still spoken in the valley.

The Valle Maira is celebrated for its authentic cuisine, the flavours of the seasonal reflecting what is available in the forests and in the orto, producing robust mountain dishes like oulo, a vegetable soup cooked with stregoni, locally grown ‘witch’s beans’, which is baked in a terracotta pot on a wood stove for twenty-four hours; pasta and potato dishes dressed in butter and melted cheese; fricando, a slow-cooked beef and vegetable stew; or polenta made with pinhulet, a local type of maize.  Sometimes the cooking has more exotic tastes with hints of Provence brought by the women who migrated seasonally to nearby France to work in the fields or as domestic staff.

Life was hard in the Valle Maira, particularly in winter when snow falls of up to six metres were not uncommon.  This time it was the men and boys who left the valley.  Unable to work in the fields or with the animals, bocche inutili, useless mouths, they went looking for work and food.  At some point the men and boys of Albaretto Macra, Celle Macra, San Michel and other villages located on the left bank of the Maira managed to carve themselves a place in the anchovy trade.  They would source these little salted fish from the ports of Genoa and then spend the winter peddling then from carts in the markets of northern Italy.  It was a trade passed down from father to son and continued to the Second World War.

How this tradition started is something of a mystery.  The most romantic theory is that they were introduced by the Saracens, pirates from North Africa, who sick of their raiding lifestyle settled in the Valle Maira in the 10th century, bringing their passion for anchovies with them.  Another theory is that the anchovies were used to cover shipments of salt being smuggled inland from Liguria to avoid high taxes.  A more likely theory is that a local cooper, who went to work in Liguria, would have returned filling his empty barrels to sell anchovies, to sell on the way home.  Whatever the origins, these stinky little fish have become a part of local cuisine and are featured in dishes such as bagna cauda, a rich anchovy-based dipping source for raw vegetables, as well as the key ingredient in the mayonnaise dressing for vitello tonnato.

In the late 1800s, with a declining economy people started to leave the valley, mostly going over the mountains into France.  In the 1950s over forty thousand people lived here but the hardship of life in the mountains and the availability of well-paying work in the booming industries of Turin meant the valley was slowly abandoned.  Today less than thirteen thousand live here and most of these, around ten thousand, live in Dronero, the town at the mouth of the valley.  However, the wheel has turned full circle and today’s high levels of unemployment in the cities has meant that a number of young people have returned their roots, rediscovering their traditions and dialect, turning the valley’s remoteness and lack of development in a virtue.

Inspired by intrepid German hikers who started exploring the valley in the summer thirty years ago, a group of young entrepreneurs began to convert the donkey trails that connected the villages and hamlets into marked walking trails, converting abandoned farmhouses at strategic points into ‘locanda’ where walkers can overnight, receiving a warm welcome, a comfortable bed and a hearty meal.  After twenty years of hard work, the Percorsi Occitani, the Occitan Trails, is a network of one hundred and seventy-seven kilometres of supported marked trails that wrap around the sides of the valley, passing through tiny, restored hamlets with teetering belltowers, extensive beech and larch forests and small pockets of high pastures.  With the increase in trade, other small businesses have grown up.  Twenty years ago, there wasn’t a cheesemaker left in the valley, today there are three; a number of small hotels and restaurants (all on a local scale) have appeared; and along the route you can book in for a yoga course, a cooking class and even basket weaving lessons.

Life in the Valle Maira has gone full circle, a place where deeply rooted identity has become an entrée to the world and where innovation has embraced tradition.

By car:  Follow the A6 autostrada that connects Turin with Savona and take the Fassano exit.  Once through Fassano, follow the SP 184, Via Villafalletti, across the plains to Dronero.  By train:  Regional trains run from Turin to Saluzzo with a change at Savigliano.  There are morning and late buses from here to Dronero, thirty kms way, otherwise a taxi will costs around 35 euro.  By air:  Torino Caselle is the closest airport.

Where to stay and eat:

Starting in Dronero, there are twenty-three ‘posti tappa’, stopping points, along the one hundred- and seventy-seven-kilometre trail where you can eat and stay the night or just have something to eat along the way.  There range from very simple b&bs and rustic ‘rifugi’ to a couple of pleasant hotels in Dronero, where the trail starts and finishes.  All of them, geart and small, are welcoming hospitality and authentic local food.  The accommodation ranges from 40 euro to 80 euro per person, half board (ie dinner and breakfast included) or around 45 to 50 euro per person in a dormitory.  Details can be found on the website:  www.percorsioccitani.it.  Here are some examples:

Hotel/Restaurant Cavallo Bianco (Piazza Manuel di S. Giovanni, Dronero).  A charming, family-run, 2-star hotel in an historic palazzo in the centre of Dronero, with an excellent restaurant and an outdoor bar looking over the piazza.  Doubles from 70 euro per night.La

Locanda del Silenzio (Camoglieries a Macra), an ‘albergo diffuso’, has a central reception and then guests sleep in cozy, alpine apartments scattered throughout the hamlet that have each been restored by the owner Francesco Garro.

La Locanda Lou Pitavin (Valle Marmora).  The owners, Maroc and Valeria, were 19 when, in 2000, they decided to leave the plains and restore their grandparents house in the mountains.  The locanda has ten rooms and an excellent restaurant.

Locanda San Martino (Sam Martino Inferiore).  This locanda was founded by two young Germans, Andrea and Maria, who first came to the valley by accident in 1978 the ‘first Germans in the valley since the Second World War’.  Spacious and well-run, it has a spectacular location.

Agriturismo al Chersogno (Prazzo).  This lovely family-run ‘farm-stay’ is situated in beautifully restored stone and timber buildings.  They have orchards and berries, go rare mountain potatoes and produce honey all of which is included in their cooking.

Osteria della Gardetta (Chialvetta).  This welcoming mountain osteria has been operating since 1936.  It takes great pride in its traditional dishes, most of the ingredients coming from there own gardens and forests.  They also have four rooms with bunk beds.

The Percorso Occitano is one hundred and seventy-seven kilometres long and has been divided into fourteen stages, starting an finishing in Dronero, the ‘capital’ of the valley.  It follows the beautifully restored stone mule trails and walking paths that have connected the villages, hamlets and parish churches of the valley for centuries.

The trail starts at 600 metres elevation and reaches up to 2700 metres.  It is well maintained and easy to follow.  Each of the stages take from six to seven hours and take from fve to six hours to complete.  There scenery is spectacular, a severe beauty, a green valley dominated by towering rocky peaks and ridges.  The valley is covered in abundant chestnut, beech and larch forest broken by patches of high-altitude meadows, stone villages and village churches.

The Sherpabus is the final piece in the puzzle.  For those who don’t want to carry too much weight during the hikes, the Sherpabus is the perfect solution.  It is a transport and taxi service that can pick up your luggage in the morning and have it waiting for you at the next stop when you get in.  It costs nine euro per piece of luggage.