September 2021: infinite beauty in Turin; Cracco in Portofino; + weekend in the valleys of Piedmont

Exhibitions in Italy in September 2021:

An Infinite Beauty, Venaria Reale (Turin); www.laveneria.it; until 1 November.  This marvellous exhibition presents over two hundred works celebrating the Bel Paese’s infitive beauty.  The works date from the early 1800s to the present day, from Romanticism to the Avantguardie.  It includes paintings by paintings by Segantini, Volpedo, Carra, de Chirico and Schifano, as well as sclptures by Penone, Anselmo and Paladino and installations by Botto & Bruno.

Mario Sironi: Synthesis and Grandiosity.  Museo del Novecento, Piazza Duomo, Milano; www.museodelnovecento.org/en/; until 31 March ’22.  Pablo Picasso chastised the Italians’ neglect of Sironi that ‘you have a great artist, perhaps the greatest of the moment, and you don’t realise it.’  The important exhibition presents over 100 paintings by the master, following his evolution from Symbolism and Futurism to the dark paintings of his final years.

The Shape of Water in 19 Works: From Sartorio to De Conciliis.  The Archaeological Museum, Lipari (Sicily); until 1 November.  Position amongst the marvellous permanent exhibits in Lipari’s extraordinary archaeological museum, this exhibitions presents paintings on the theme of water by some of Italy’s painters, from 1900 to now.

Events in Italy in September 2021: 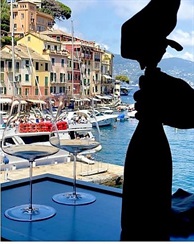 Cracco Portofino (Molo Umberto 1, Portofino);  @carlocraccoportofino.  Carlo Cracco is one of Italy’s most celebrated chefs.  His latest venture, opened in July, has a spectacular setting on the waterfront in Portofino, one Italy’s most gorgeous villages and aims to celebrate the best of Ligurian cuisine.  The meat-free menu focuses on the regions marvellous produce, highlighting its seafood, fresh vegetables and fine wines.

Raphael and the Golden House, Rome (www.raffaellodomusaurea.it).  When Nero died his incomplete palace, the Golden House, was stripped and buried out of shame for his decadence.  It was lost to history until a young man fell through a cleft in the hillside in the late 15th century, finding him a strange cave (grotto) covered in paintings.  These ‘grottesques’ inspired artists from Raphael to Michelangelo, both of whom were lowered into the cave on rope to study the paintings.  This fascinating exhibition is being offered to celebrate the reopening after a year of restoration.

Sagrestia Nuova, Cappelle Medicee (San Lorenzo, Florence); www.bargellomusei.beniculturali.it.  After eight years work, the tombs of the Medici family, designed and carved by Michelangelo in the early 1500’s, has finally been completed and re-opened to the public.  Worth a trip on its own. 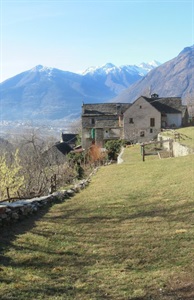 Montecreste is a town that doesn’t really exist.  The name, which means ‘mountain of ridges’, covers thirty or so villages and tiny hamlets scattered that are scatterd across a wedge of mountains between Lake Maggiore and the Swiss border.  They are in the Valle Isorno, which, despite its nickname as the ‘valle impossibile’, is only a few kilometres from the town of Domodossola.  This mountainous area has been inhabited since the Stone Age, menhirs from 3000 BC have been found here was well as the ruins of a Roman road that passed through here on the way to Switzerland.

Facing south to catch the sun and with mountains behind it to block the cold northern winds, Montecreste was known as the ‘riviera of the Ossola’ for its benign climate but this wasn’t enough to save the hamlets.  In the 1950s and 1960s all of the hamlets and villages were abandoned as the inhabitants were drawn to work in the booming post-war cities down on the plains.

Paradoxically, it was the poverty and isolation that has saved these ancient stone settlements.  Neglected and threatened by encroaching forests, they have preserved their integrity, perfect examples of an ancient way of construction.  In 2001, the Canova Association was founded with the mission of preserving these fine examples of ‘architecture without architects’.

With thirty houses and a small castle, Veglio is the largest settlement.  It dates from the 13th century.  Today seven of the houses have been restored, rigorously using local materials and following the traditional building techniques.  Nearby Ghesio was almost completely overgrown with forest when its restoration began.  Today it has three new inhabitants, an architect (Maurizio Cesprini), his wife and dog, with others to follow.  Assisted by the Canova Foundation, the home recently won an international prize from Constructive Alps for its achievements.  It has become a point of reference point for others revitalising this magnificent corner of Piedmont.

With its hiking trails, its history and its uncontaminated nature, Montecristo is a marvellous place to explore, particularly in autumn, when the temperatures are falling, the forests are changing colour, mushrooms are appearing and fires are being lit.  The perfect place of discovery for a Hidden Italy weekend!

Hotel Eurossola (Piazza Matteoti 36, Domodossola).  This comfortable three-star hotel is in the centre of Domodossola.  It has a classic exterior and a contemporary interior, with touches of haute design.  It has twenty-five rooms and a Michelin-starred restaurant, the Atelier Restaurant, as well as a bistro.  Doubles with breakfast from 104 euro.  Degustation dinner at the restaurant 70 euro per person).

B&B Popai La Coin Perdu (Montecreste, locality Castelluccio).  Only five kilometres from Domodossola, this beautiful house is surround by gardens on the edge of forest.  It has three large rooms with en suites and offers a rich breakfast based on local produce.  Double room with breakfast 100 euro.

B&B Ca d’Mate (Via Valle Formazza, Oira di Crevoladossola).  A fortified stone house that dates from the 16th century, this splendid B&B has three spacious room, each named after a local wine (Prunent, Tarlap amd Nuov Bruschett), bottle of which are aging in cellars under the B&B (which you are encouraged to taste).  Double with breakfast from 80 euro.

Trattoria Vigezzina (Statale 337, Trontano).  Operating since 1889, this trattoria has been run by the same family for three generations.  With an atmosphere of other times, they serve in traditional and seasonal food, specialising in their meat dishes and excellent risottos.  Around 60 euro per person.

Divin Porcello (Borgata Cresta 11, Masera).  A rustic, old-school osteria, which has a verandah for the warmer seasons.  It serves, excellent ‘ossolana’ cooking including homemade salami, gnocchi and lausciera, pork roasted on hot stones.  Around 40 euro per person.

Osteria il Gallo Nero (Montecreste, locality Pontetto).  A contemporary building of stone and wood, that serves traditional dishes based on local produce.  Around 35 euro per person. 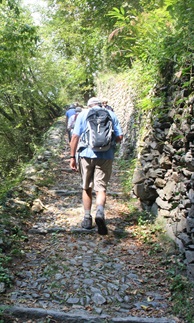 The best way to explore the valley is on foot.  There are a number of well-marked trails that connect the hamlets of Montecreste.  The most complete is a 13.5 kilometre loop walk that starts and finishes at Pontetto.  The first leg is a gentle climb up to Roldo.  You then follow through forest beside the Isorno Stream, visiting Burella, Cardone, Giosio and Naviledo until you arrive at Altoggio, the highest of the hamlets.  From here, you loop back down through Nava to Chiesa (the ‘capital’ of the valley) and then onto Castelluccio and Piaggino before returning to Pontetto.

Apart from the beautiful forest and stunning mountain scenery, you will also visit some of the historical treasures of the valley:  the Temple of Lepontico di Roldo (built in the 1st century AD); the belltower at Chiesa which, at 70 metres high, offers fabulous views; and the medieval Devil’s bridge crosses the Isorno. 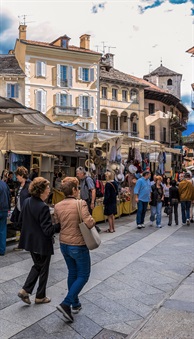 Sitting on the banks of the Toce River, with seven valleys converging on it and within striking distance of Switzerland, Domodossola has been a busy marketplace since Roman times.  Farmers have come down from the valleys since time immemorial to exchange products and sell their artisan wares.  It is not by chance that the main square is called Piazza del Mercato.  There is a plaque on one of the buildings in the square that dates from 917, when Berengario, the Emperor of the Franks, gave the town permission to hold a Saturday market, something which has continued until today.

Every Saturday, the piazza and the arcades in the surrounding medieval palazzi are filled with kiosks and stalls that sell everything from clothes to fine foods.  It is still not unusual to see elderly ladies from the valleys standing behind clothes spread out on the ground selling chestnuts, mushrooms, berries, wild asparagus and hand-made cheeses.

Until five years ago, the lovely medieval streets and lanes of the historic centre of Domodossola (the Borgo) were jammed with traffic and parked cars.  After a comprehensive reorganisation, the Borgo is virtually car-free, and it is now possible to wander the streets and fully enjoy the treasures that the town has to offer.  The star turn is the recently restored and Palazzo San Francesco, an 18th century building that incorporates a 13th century church.  The palazzo is also the home of the excellent Galletti Museum.  On the first floor the collection is dedicated to a natural science museum; the second floor is an historic art gallery; while the third is given over to archaeology and sacred art.

Once you’ve finished exploring the town, the best places to sit, sip a drink and watch the world go by are in Piazza del Mercato.  Bar Domo is the most popular; Acosta Café is popular with the younger set and a good place for an aperitivo; while Caffe Bertani is the classier of the three, famous for the Ecole des Italian, a group of enthusiasts who meet here regularly to discuss and analyse works of art proposed by the owners of the caffe.  These have included works by Warhol, Modigliani and Burri.

After that, you’ll need some dinner.  You could try the Altiere Restaurant at the Hotel Eurossola.  Otherwise, one of the most popular restaurants in town is the Ristorante da Sciolia, a traditional osteria that serves local dishes with a modern twist.

The train ride from Domodossola to Locarno, at the northern end of Lake Maggiore takes around one and a half hours each way.  Whether you are a train buff or not, it is one of the most memorable and enjoyable journeys you’ll ever make (a big call, I know…).  The small, single line train leaves Domodossola down the Vigezzo Valley before crossing the border into Switzerland and travelling down the beautiful Centovalli to Locarno.

Along the way, you will enjoy very spectacular and varied scenery including passing dramatic cliffs, small lakes, deep forests, crossing over ancient bridges with tiny stone villages and towns perched high on the valley walls.

Locarno itself is a very attractive town.  Sitting at the end of Lake Maggiore, it enjoys a mild, Mediterranean climate.  Its pretty streets are lined with palm-trees and gardens bristling with subtropical flowers and foliage.  It has a pretty lake foreshore and a charming Renaissance old town in which you’ll find the excellent museum (Roman and Bronze Age exhibits) housed in the Visconti Castle.  If you have time, it is well worth taking the cable-car (which starts next to the station) up to Sanctuary of the Madonna del Sasso and its extraordinary view.  You can enjoy lunch sitting at the Ristorante Svizzero in the gorgeous Piazza Grande.  Otherwise you could enjoy a long lake-fish lunch overlooking the lake at the classy Centenario.

The trains run backwards and forwards every hour or so, it is an easy day-trip.  Some of the carriages have full glass ceilings.  The return trip costs 35 euro first class.  Best to book and don’t forget your passport!  For details see:  www.vigezzina.com.

If you are really keen, you could do the Lake Maggiore Express, which a combination of the train from Domodossola to Locarno; a ferry down Lake Maggiore to Stresa; and then a fast train back to Domodossola.  It can be done in a day but the schedules are also flexible and you can break the journey along the way.  It takes a bit of planning but is a special experience.  Full details at www.lagomaggioreexpress.it.