Exhibitions in Italy in July: 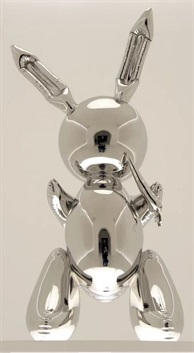 American Art.  1961 to 2001,  The Collection of the Walker Art Centre.  Palazzo Strozzi (Florence); www.palazzostrozzi.it; until 29 August.  From the Vietnam War to the Twin Towers, this exhibition is a thematic journey through the contemporary history of the USA, paintings, video, sculptures and installations.  It presents works from Andy Warhol to Claes Oldenburg; from Jimmie Durham to Kara Walker.

The Myth of Venus at Palazzo Te.  Palazzo Te (Mantua/Mantova); www.palazzote.it; until 12 December.  This exhibition celebrates Venus, the goddess of beauty in Palazzo Te, one of the most important buildings of the Italian Renaissance, which you’ll find in the heart of this gorgeous small city fifty kilometres south of Verona.  It includes twenty-eight portraits of the goddess, including two by Giulio Romano, the architect of the palazzo: a sculpture of the Veiled Venus and a Flemish wall-tapestry based on Romano’s design.

La Corbusier.  Journeys, objects and collections.  Pinacoteca Agnelli-Lingotto (Turin).  www.pinacoteca-agnelli.it/visit/en/; until 5 September.  One of my favourite building is the Lingotto (the Ingot) FIAT’s marvellous car factory (which includes a circular speedway on the roof) designed by French master Le Corbusier in 1916.  Restructured as a cultural/entertainment centre in the 1980’s by arch-star Renzo Piano, the Lingotto is the perfect place to host this restrospective of the French-Swiss architect.

Events in Italy in July

Music with a View, 2021.  Throughout Italy;  www.comitatoamur.it/en/musica-con-vista/; until 18 September.  Comitato Amur and the Association of the Historic Houses of Italy have come together to present this open-air chamber music festival, thirty-eight concerts featuring the best young ensembles of the international music scene hosted in some of the most beautiful places of Italy.  It is a musical journey through the gardens, cloisters and courtyards of some of the country’s finest historic houses and palaces.

The Cherry Orchard.  Great Theatre, Pompeii (Naples); https://teatrodinapoli.it/evento/la-cerisaie-il-giardino-dei-ciliegi/; 23 to 25 July.  Widely considered as one the great plays of the 20th century, Anton Chekov’s last play will close a festival of fifteen plays hosted in the spectacular Great Theatre in the heart of the Pompeii Archaeological Park.  It will be directed by Tiago Rodrigues with French star Isabelle Huppert as the protagonist.

Procida, Italian Capital of Culture 2022.  Procida (Naples); www.facebook.com/procida2022/; until 31 December, 2022.  The island of Procida in the Bay of Naples will be the Italian Capital of Culture 2022.  The tiny island is admired for its lively architecture and vibrant coloured houses.  It has strong artistic traditions and poetic scenery, which has formed the setting for a host of movies including The Postman (Il Postino) and The Talented Mr. Ripley. 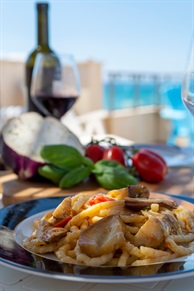 It's been a hard year and, even if we can get there immediately, its nice to have something to dream about and few things can be better than a summer holiday in a lovely vineyard on a remote, magical Mediterranean island off the cost of Sicily, enjoying the sun, solitude, wine and food.  Below we have four suggestions, two quite smart, the other two a little more rustic, but all of them very special destinations.

Heroic winemakers; volcanic soils rich with minerals; sunshine and sea breezes: these are the factors that contribute to the the success of these four wineries on Pantalleria, Favignana, Ustica and Salina, tiny islands off Sicilian.  Each vineyard has its own unique history and each has its own fabulous accommodation.  All of them are destinations to dream about and, who knows, even visit in the not-too-distant future. 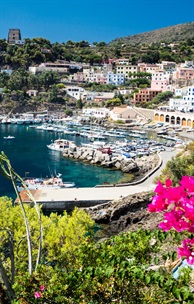 Ustica is only five kilometres across.  It sits on the middle of a marine national park, the first declared in Italy.  Divers from all over the world head to Ustica to explore its magnificent waters, including the underwater archaeological trail off Punta Cavazzi and the Scoglio del Medico, a basalt outcrop riddled with caves.  Ustica is only nine square kilometres but has some excellent walks as well including a trail up through pine forests to the summit of Guardia di Mezzo which descending to the coast at Spalmatore, where it’s possible to swim in natural rockpools.

Apart from its natural beauty, Ustica is also home to one of Sicily’s more interesting vineyards.  Eleven years ago, Margherita Longho and Vito Barbera (both with degrees in Agronomy and both now aged 43) decided to leave their careers in Rome (she worked for the Ministry of Agriculture and he was a researcher) and return to their home on Ustica (a tiny island sixty kilometres north of Palermo) and dedicate themselves to wine-production and hospitality.

Their property is called Hibiscus, and includes their vineyards, their farm and lovely accommodation all a stone’s throw from the sea..  They grow four types of grapes (all indigenous to Sicily):  Grill, Inzolia, Catarratto and Zibibbo (all of which produce wines).  The accommodation includes four simple but very comfortable self-contained apartments with shaded patios, surrounded by gardens and vineyards.  It is a two-hundred metre walk from the sea.  Guests are welcomed to help themselves to the garden produce, which includes the island’s famous lentils.

How to get to Ustica: 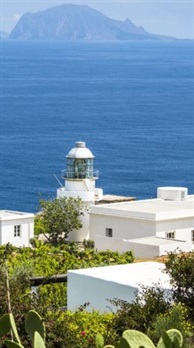 Salina is one of the Aeolian archipelago, a group of seven volcanic islands, fifty kilometres off the oast of Sicily.  It is the greenest and most fertile island of the archipelago, the only one with a permanent source of fresh water.  Salina is defined and shaped by the two volcanoes that gave it its Greek name, Dydime, meaning ‘double’.  Although extinct since antiquity, previous eruptions combined to render the island the most fertile of the archipelago.

There are number of good hiking trails on the island, including a steep climb to the peak of Fosse delle Felci, which is the highest point of the island (962 metres asl) and has extraordinary views, and a gentler route along the Valdichiesa, the green valley that separates the two volcanoes.  There is good diving and underwater fishing off the southern village of Rinella and some good beaches, including Pollaro, which was the setting for the movie Il Postino.  However, the best reason for going to Salina is visit, and stay at, the Tenuta Capofaro.

The Tenuta Capofaro, owned by the Tasca d’Almerita family, producers the finest Malvasia delle Lipari, a delicious ‘passito’ wine produced when the grape bunches are partly withered on the vine, then after harvest they are spread out on cane racks to dry in the sun for about 15 days, thus concentrating the sugars and making an exceptional white wine.

Siremare (www.traghettilines.it/) operates regular hydrofoil and car ferry services from Milazzo, which take around 2 hours, including a stop at Lipari on the way.

The Tenuta’s accommodation, la Locanda, is truly spectacular.  Emersed in the vineyard, it has twenty-seven rooms, including six of which are set a restored lighthouse, high on cliffs overlooking the sea.  The Locanda’s restaurant is run by chef Gabriele Camiolo who presents traditional dishes based on local produce and given a contemporary twist.  Doubles including breakfast start at 450 euro per night. Dinner at the Locanda costs around 80 euro per person. 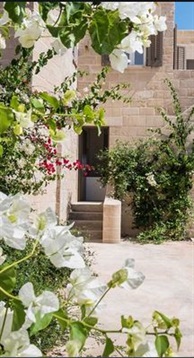 Favignana is off the west coast of Sicily, a short ferry ride from Trapani.  It is one of the three volcanic islands of the Egadi Archipelago.  Favignana is a the best base from which to explore the archipelago (there are regular ferries connecting the islands, leaving from Favignana port).  The principal attraction is the sea, which is said to be the bluest in the Mediterranean.

Each of the islands has a combination of sand beaches and rocky coves.  Favignana is the largest and is relatively flat and can be easily explored by bike.  Marettima is the smallest and most remote.  It has only one small village but several excellent swimming places including Cala Sarda and Cala Nera.  It is possible to rent a boat tour around the island from the port.  There is also some excellent walking including up to Pizza Campania, at 830 mts asl, the highest point of the island.  Levanzo, the third island, also has some good hiking but it is most famous for the Grotta del Genovese, a cave discovered in1949, which has Palaeolithic paintings and Neolithic incised drawing that are between 6000 and 10,000 years old.

Favignana is the only island of the archipelago to produce wine.  One of the finest vineyards is the Tenuta di Calamonti, part of the Cantina Firriato, which was only planted in 2009, reintroducing vines to the island for the first time in over one hundred years.  The Tentua’s five hectares produce a number of prestigious wines using only local grapes:  La Muciara, a white wine blend of Grillo, Catarratto and Zibibbo grapes; Le Sciabiche, a red wine produced from Perricone and Nero d’Avola grapes; and Passule, which uses only Zibibbo grapes.  The Tenuta has its own accommodation which is in the middle of the vineyards, which is only a short walk from the sea.  Private wine-classes and vineyard visits with the winemaker can be organised.

Siremar and Liberty Lines both run regular ferries and hydrofoils from Trapani.  The hydrofoil takes around twenty minutes.

Tenuta di Calamonti (Contrada Calamonti; www.calamonti.it).  The Tenuta has accommodation in the main villa, a combination of double and triple suites, as well as a number of beautifully appointed self-contained apartments in the heart of their vineyard. 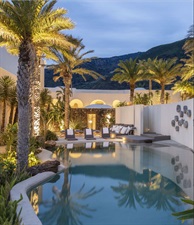 Pantelleria is a bit bigger than Ustica, it is nearly eighty-four square kilometres, but it is also a bit more remote, lying one hundred kilometres south of Trapani, closer to Tunisia than it is to Sicily.  Pantelleria wines have been celebrated since antiquity and the island’s physiology has been molded by terraced vineyards.  The island’s most famous grape is Zibibbo, used to produce the famous Moscato di Pantelleria.

In 2011, Giulia Pazienza Gelmetti left a career in finance on the mainland to first to establish a vineyard, Coste Girlanda, and then, in 2017, Sikelia Pantelleria, the island’s only 5-star luxury hotel.   This wonderful property was created restoring dammusi, traditional island houses built out of volcanic rocks, which have domed roofs and high whitewashed walls enclosing private gardens, reminiscent of the nearby Arabic architecture.  A highlight of a visit to the Sikelia is dinner at the Officina, their restaurant located in the heart of the vineyard, where guests can sample the excellent local food accompanied by their own fine wines.

Hotel Sikleia Pantelleria (Via Monastero; www.sikeliapantelleria.com/en/).  The only luxury 5-star hotel on the island.  Doubles with breakfast from 432 euro.  It is also possible to visit the company’s own vineyards, where you can book a tour and degustation visit (from 40 euro per person) or eat at their marvellous restaurant Officina:  www.costeghirlanda.it.