May 2021: lobster sandwiches; the Queens of Sculpture; and a fabulous weekend in Rivello 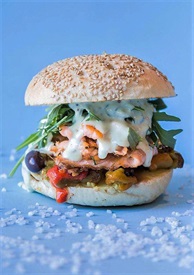 The Fisherman Burger.  Via Ravenna 34; Rome; @TheFishermanBurger.  This celebrated fish eatery, which that takes its inspiration from Pugliese fishermen and the gastronomy of New England, has found a new home in the Nomentana quarter of Rome and continues to serve its fans specialities like lobster panini, fritto di paranza (a fry-up consisting of small fish such as mullet, the sole, the cod, anchovies and hake) and Salentine mussels.

The Festival of Bubbles.  Conegliano Valdobbiadene (Veneto); www.prosecco.it; until 6 June.  It shouldn’t surprise that in recent times, prosecco has become the most widely sold wine in the world.  The vineyards around Conegliano Valdobbiadene, the home of prosecco, are UNESCO World Heritage listed.  The 15 municipalities of the region have come together for three months of celebrating this wonderful wine.  Full details on the official website (above).

Regina Della Scultura (the Queen of Sculpture).  Galleria of Modern and Contemporary Art; Bergamo; www.gamec.it; until 29 August.  The creative career of the Lombard sculptor Regina Cassolo Bracchi (1894 to 1974), aka Regina, is told in this through the combined collection of Gamec in Bergamo and the George Pompidou Centre in Paris.  The exhibition presents over 250 works that track the development of this audacious artist who work in materials such as aluminum, iron wire, tin and lead.

Savinio.  Enchantment and Myth; Palazzo Altemps, Rome; www.museonazionaleromano.beniculturali.it; until 13 June.  Alberto Savinio (1891 to 1952) was the lesser-known brother of Giorgio de Chirico (one of the major painters of the 20th century) but also a very accomplished artist in his own right.  This exhibition brings together over 90 of Savini’s works including dozens of paintings, sketches, notebooks and manuscripts that reveal the eclectic avtivity of this talented modern-day Renaissance man who was an artist, writer, scenographer and costume designer. 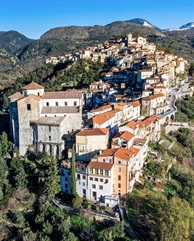 Rivello is one of the most beautiful towns in Basilicata, the southern Italian region that sits between Puglia and Calabria, the ‘instep’ on the ‘boot’ of Italy.  It is one of a number of hilltop towns scattered throughout the region that for centuries have guarded the mountain passes that lead into Basilicata.  But Rivello is not just another picture-perfect medieval village, the entire town is a national monument and it has a curious history.

The town was originally settled on three hills twenty kilometres inland from the Tyrrhenian coast by people fleeing Saracen pirates in the 7th century.  Due to its strategic position overlooking the Noce Valley and the Sirino Mountain range, in the 11th century the town was fought over by Byzantine and Lombard invaders.  Neither power managed to gain the upper hand so they reached an unlikely compromise: the German-speaking, Catholic Lombards settled in the upper town and the Greek-speaking Orthodox Byzantines settled in the lower town, two diverse cultures developed in the one town.  Although the Greek rite was abolished in the 17th century, this division is still felt today.

Rivello’s charm lies not only in its narrow alleys and stairways, filled small piazzas and houses decorated with balconies and architectural motives but also in its position, which spreads over three hills and gives easy access not just to the Noce Valley but also to three national parks (the Pollino, Italy’s largest; the Appennino-Lucano; and the Cilento, just across the border in Campania) as well as one of the prettiest stretches of coastline in southern Italy.  It is a perfect place for a Hidden Italy weekend.

By car:  Take the A2 which connects Naples with Calabria and take the Lagonero Nord exit and then follow the SS 585 to Rivello.  By train:  The Frecciarossa, Intercity and regional trains stop on the coast at Maratea, the closest station.  There are regular bus services to Rivello (www.sitasudtrasporti.it).  By air:  the closest airport is Lamezia Terme at Naples (200 kms away).

B&B Lo Straniero (Via Pace).  Set in an early 1900s palazzo in the historical centre, this B&B has three rooms, each with splendid views down over the Noce Valley.  They also have an ‘enoteca’ next door where you can sample the excellent local wines.  Double with breakfast from 70 euro.

B&B Borgo Revelia (Corso Vittorio Emanuele 122).  In the heart of the historic centre of town, this simple B&B brightly coloured rooms with polished timber floors.  The owners organise tours into the surrounding countryside.  Doubles with breakfast from 50 euro.

B&B Villa Alemi (Corso Garibaldi 70).  This recently restored 18th century home has six rooms, each furnished in full ‘shabby chic’.  Breakfast is served on a large terrace, which has views over the ample garden.  Double room with breakfast from 60 euro.

B&B Villa Priante (Contrada Pieta 5).  This B&B is a 19th century villa in the hills overlooking Rivello, with beautiful over the Policastro Gulf.  It has three rooms with panoramic views to the sea.  Double rooms with breakfast from 50 euro.

Trattoria del Pellegrino (Corso Vittorio Emanuele 2).  In the centre of town, this trattoria offers tasty, traditional cooking.  Its signature dish are the freshly-made ravioli, filled with ricotta and served with a fresh tomato sauce garnished with basil.  Dinner from around 30 euro.

Il Rifugio del Cavaliere (Contrada Molingiulo 107).  An historic farmhouse which has been transformed into a welcoming agriturismo.  Specialities include fusilli with crisp pepperoni and breadcrumbs and roast lamb with potatoes.  Dinner around 30 euro.

Agriturismo Coccovello (Contrada Carposcino 2).  Set in a farmhouse immersed in the hills, this agriturismo offers the best of local cuisine:  including antipasto such as soperzata, a fresh pork salami, and first course suich as la lagane (tagliatelle) with beans.  Dinner from 25 euro.

Ristorante La Dolce Vita (Viale Monastero 18).  Sitting in front of the convent of Sant’Antonio, the interior of the restaurant is inspired by the 1960s.  Dishes include paccheri (a flat tubular pasta) with baccala and pepperoni sauce and local sausages cooked over the grill.  Dinner from around 20 euro.

Friday and Saturday: explore the town and surrounds 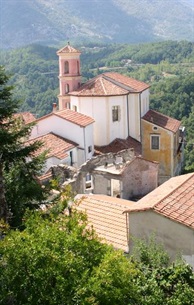 After checking, head for Piazza Umberto, a small square in the centre of town, surrounded by historic palazzi on three sides with spectacular views over the Noce Valley and Mt Coccovello.  Have dinner and hit the hay early.

The best place to start your visit to Rivello is the Convent of Sant’Antonio, which is immersed in forest at the foot of the town.  The convent was built in 1515 on a pre-existing Byzantine church.  It was inhabited by Franciscan monks until its suppression in 1889 and contains some of the finest works of art in the region, completed between the 16th and 17th centuries when the town enjoyed its period of greatest prosperity.  It includes a number of important works by father and son Giovanni and Girolamo Todisco, such as the curious ‘Martyrdom of Christians in Japan, painted in 1616.  The most important fresco was painted earlier in 1559 by Giovanni, a Last Supper which shows Jesus and the Apostles as guests of the commissioning lord, who is also seated at the table with his wife and wide selection of local specialities such as stuffed rabbit, soperzata salami and figure-8 biscuits.  There is also an interesting local museum on the first floor of the convent which explores the ancient history of the area from the original inhabitants to the Greeks.

The entrance to the car-free lower town is a short walk from the convent.  Follow the lanes that take you uphill past crowded stone houses, chapels and noble palazzi, including the impressive Palazzo Megale, which dates from the 11th century until you arrive at the church of Santa Maria del Poggio in the Byzantine, Greek-speaking part of the town.  This impressive church was founded in the 9th century on top of an earlier church dedicated to St John, the patron saint of sailors.  Unfortunately, the interior is currently under restoration and is not visitable.

Continue climbing up through the lanes until you come to a large, monumental flight of stairs which lead to the church of San Nicola in the upper town, the heart of the Lombard town, built on the ruins of an ancient castle.  The 17th century façade has three sculptured doors above which are statues of the Madonna with Baby and San Nicola, the patron saint of the town.  The most impressive part of the church is the vast Romanesque crypt, which dates from the 11th century and has three rows of thirty-four columns made from local stone.

Saturday afternoon:  Get some fresh air

Rivello overlooks the Nce Valley and is at the confluence of three national parks and has many outdoor options.  Local company Percorsi Lucani (www.percorsilucani.it) have a wide selection of trekking itineraries including a 15 km hike along the Sentiero Italia from Rivello up to Mt Sirino or a less demanding 2-hour loop that connects two lakes at the foot of Mt Sirion, Lake Zapano and Lake Laudemio, the southern most glacial lake in Europe.

Otherwise, Pollino Adventure (Pasquale +36 349 7561374) offer a range of activities around the Noce Valley, including rafting or trekking along the Noce River.  If you are really keen, they also offer four hour canyoning and abseiling adventures along the Bitonto River.

If you visit Rivello in the winter, you could even squeeze in some skying.  Mt Sirino is 1907 metres high and has a ski centre at Lake Laudemio.  They have a chairlift and three ski lifts with a total of four kilometres of ski runs, including blue, red and even some black runs.  They ski lifts are open on the weekends and public holidays starting at 09.00.  The Rifugio Italia is a modern structure which offers self-service meals and breathtaking view

Sunday: head to the beach 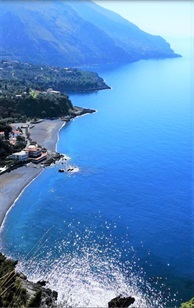 Maratea, the Pearl of the Tyrrhenian, is a 24 km down the Noce Valley from Rivello.  This thirty kilometre stretch of coast, mostly rocky bays apart from a single sand beach at Castrocucco, is one of the most fascinating in southern Italy.  Being relatively hard to get to, there the coast is relatively quite, a long way from mass-tourism of the coastline further to the north.  It centres around the Marina di Maratea and its elegant port.

The most popular spots are the small beaches at Acquafredda, Macaro, Fiumicello, Porto and Marina.  The freshest and best fish is served Za Mariuccia (Via Grotta 2), lunch around 50 euro per person.  Maratea town itself is a two kilometre drive in the hills above Marina di Maratea.  It is a charming town of small lanes, restaurants and bars.  It is overseen by a colossal statue of Christ the Redeemer, inspired by the massive statue above Rio di Janeiro.  There is a paved pilgrim trail that climbs up to the statue from the main square in Maratea.  It’s a steep 30 minute climb but well worth it for the spectacular view along the coast, stretching from the Amalfi Coast to Calabria.