Exhibitions in Italy in Febraury 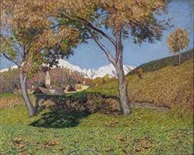 Carlo Fornara and Divisionism, Archaeological Museum, Piazza Roncas, Aosta, www.lovevda.it/it/cultura, until 15 March.  The Piedmontese painter Carlo Fornara (1871-1968) was one of the major artists in Italian and European art at the turn of the nineteenth and twentieth centuries, as this comprehensive exhibition shows.  The exhibition itinerary of 80 works including paintings, drawings and graphics takes the visitor through the painters development from expressionism to his en plein air search for an objective interpretation of nature.

Divine Creatures, Women in Art from Tiziano to Boldini, Palazzo Martinengo, Brescia, http://amicimartinengo.it/, until 7 June.  With over 90 masterpieces on display, this impressive exhibition explores the role women have played in Italian art from the early Renaissance to the Baroque and the Belle Epoque, from Biblical heroines to fascinating noblewomen and affectionate mother.

The Second Principle of an Artist called Banksy.  Palazzo Ducale, Genoa,  http://www.palazzoducale.genova.it/nenglish/  Born in Bristol around 1974, generally classified as street artist, Banksy is an exemplary case of popularity for a living artist in the tradition of Andy Warhol.  Today, many consider him the greatest global artist of the new Millennium.  This impressive exhibition  brings together over one hundred original works and objects by the British artist: freehand paintings; stencils; as well as the silkscreen prints that Banksy considers vital to spreading his message. There are also installations, and other works from Dismaland (such as the Mickey Snake sculpture where Mickey Mouse swallowed up by a python). 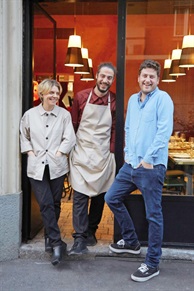 Ice Music Festival, Presena Glacier, Ponte di Legno (Lombardy), www.valdisole.net/en/Ice-Music/, until 29 March.  After the success of the inaugural festival last year, the Ice Music Festival returns.  Centred around an ice igloo/theatre on the Presena Glacier (2600 mts asl) this wonderful festival presents a varied calendar of music rigorously played only uses instruments made from ice: Violins, violas, guitars, percussion and xylophones, performed by artists of national and international reputation.  It is accompanied by a sculpture exhibition, a food festival and an ice puppet spectacle by the Sicilian Mimmo Cuticchio.

Pieta Bandini by Michelangelo, Opera del Duomo Museum, Florence, www.operaduomo.firenze.it.  Michelangelo created not one, not two but three Pietas in his lifetime.  The Pieta Bandini was the last, worked on when Michelangelo was in his 80s.  It was destined for his own tomb is believed to include a self-portrait of the Master (as Nicodemo with his arms around Mary and Jesus).  It was never completed – dissatisfied, he tried to destroy it and then gave it to one of his assistance.  The powerful sculpture is being restored in Florence in an ‘open workshop’ in the museum which means that visitors are able to watch the work as it progresses.

Sitting in a natural amphitheatre dominated by Mt Mirauda (2157 mts asl) and the Rocca dell’Abisso (2,755 mt asl) at the head of the Vermenagna Valley, , the small ski town of Limone Piemonte in the mountains on the French border is known as the ‘Queen of the Maritime Alps’.  It proximity to the border and its position on the salt road trade routes between Liguria and Piedmont that Limone has had a long and colourful history and is now a pleasing combination of pragmatic Piedmont reserve with a dash of French flair.  You could say Limone has the best of three worlds: the mountains; the plains to the north (it is within striking distance of Cuneo an attractive farming town, which is the capital of the Langhe truffle and wine producing district); and the coast to the south (Ventimiglia, a buzzy resort town on the Italian Riviera, is only sixty kilometres away).

Limone has been connect by rail to Cuneo and Ventimiglia since the 1920s.  The combination of easy access and abundant snow (the result of the moist coastal winds from the south meet the cold winds from the north) has meant that Limone has had a long history of winter sports.  In fact, it was here in the 1890s that a Swiss engineer resident in Turin, Adolfo Kind, experimented with wooden skis for the first time in Italy.  Shortly afterwards, the Italian army based its first Alpine Ski Corps at Limone and in 1908 hosted Italy’s first downhill ski competition (mostly for the ‘Alpini’ but also open to civilians).

Although Limone attracts people from Turin and the rest of Piedmont, most of the skiers drive up from the coast, from both the Italian and French sides of the border, following the winding road that crosses the Tenda pass.  The Riserva Bianca, as Limone’s ski area is known, has over eighty kilometres of ski runs and seventeen ski lifts with three departure points: Alpetta, Limone 1400 and Limonetta.

With the combination of snow, truffles and wine to the north and the Ligurian Riviera to the south, Limone has much to offer for a Hidden Italy weekend!

By car:  Limone is 30 kms from Cuneo and you arrive heading south on the A6 autostrada Torino-Savona and taking the Mondovi exit.  From here you take the State highway 564 to Cuneo and then follow the signs to Borgo San Dalmazzo and Limone Piemonte.  By train:  Limone is on the Cuneo/Ventimiglia line.

Fiocco di Neve Relais & Spa (Via Roma 2c).  This refined 4-star hotel is the most luxurious hotel in the ‘Riserva Bianca’.  The rooms are lined with timber and have names of the surrounding peaks.  There is a spa with a Finish sauna, Turkish baths, and hydromassage.  Doubles with breakfast from 400 euro.

Grand Hotel Principe (Via Genova 5).  This 4-star hotel was built in 1937 and is one of the historic points of reference in the town.  Every room is decorated in Alpine style and each has a heated pool.  Doubles with breakfast from 100 euro.

Hotel Marguareis (Via Genova 30).  In the centre of town, three hundred metres from the ski lifts, this family-run hotel has a garden, a restaurant and simple but comfortable rooms.  Doubles with breakfast from 100 euro.

Locanda del Colle (Limone 1400, locality Panice Soprana).  Up amongst the ski fields, this ‘locanda’ has comfortable rooms and an excellent kitchen serving classic mountain dishes.  Doubles with breakfast from 100 euros.

Osteria Il Bagatto (Via XX Settembre 16).  This historic ‘osteria’ is a point of reference in the town – a handsome building made from stone and wood.  Chef Luciano Gautero combines traditional Piedmont with the flavours of Liguria.  Around 50 euro per person.

La Taverna degli Orsi (Via Giovanni Viale 17).  This cosy restaurant specialises in local cuisine and offers a number of different degustation menus.  It is particularly renowned for its ‘zabaglione’ (delicious treat made from whipped eggs, sugar and Marsala wine).

Chalet Le Marmotte (localita Panice Soprana).  This very popular place is a chairlift ride up from Limone 1400.  It has been run by Nino Viale and his family since 2005.  The terrace is very popular with skiers, a perfect spot for lunch admiring the mountain views.  Its classic dish is polenta with venison sausages.

Get there early, go for a stroll down Via Roma, have an aperitivo before an early dinner and an early sleep.

The skiing in the Riserva Bianca is generally fairly easy -medium difficulty with some gentle slopes for beginners, however, it also has several black runs and regularly hosts World Cup competitions.

The ski fields are easily reach Limone.  There are three starting points.  Alpetto is reached  via the Bottero cable car (named after the French slalom coach Severino Bottero, who was a native of Limone).  From here there is spectacular panorama dominated by the majestic pyramid of Monviso mountain (3841 mts asl) with Cuneo and the Po Plain off in the distance.  There are a variety of runs but the star is the black run, the Alpetta Olimpica - the gradient is not dramatic and the long sweeping curves are within the reach of even less experienced skiers.

Limone 1400 is the second point of departure. There is a ‘kinder park’ and the ski school here, however, there are two ski lifts to take you up to more challenging slopes, including Cabanaira Cresta, a black run with 1500 metres of descent.  You can also take the Colle di Tenda ski lift from here up to the Chalet le Marmotte, with its celebrated restaurant.  From here, 15 minutes of cross-country skiing takes you to the ruins of Forte Centrale, a structure built in the late 1800s as a defence against the French.

Limonetta.  This is the third ski area of the Riserva Bianca.  The main run here is the red run Pernante, two and half kilometres of leisurely descent.

Sunday:  Pop down to the Italian Riviera

For a change of pace, head south and spend the day enjoying the sunshine, colour and mild temperatures of the Ligurian Riviera.  Ventimiglia, a buzzy hilltop town overlooking the sea, is only sixty kilometres south, a one-hour trip either by car or train.

Ventimiglia is divided by the Roia Torrent into an old medieval town on a hill and the ‘new’ town on the coastal plain.  Given its strategic location has a long history: there are archeological sites in the area that date back to 6,000 BC; it was an important Roman waystation on the way to France; from the medieval era until the early 1900s, it was an Italian bulwark against French invasion.  These days it is a pleasant, well-preserved resort town.

We’d start out day trip with a visit to the Archaeological site (the excavations of the Roman town of Albintimillium), then the 15th century church dedicated to St Augustine, which has very attractive cloisters that often host modern art exhibitions.  From here you can visit the Mercato Coperto, which was originally a flowers market (the coast’s most important export) but is now dedicated to fruit and vegetables and a range of local products.

For a traditional Ligurian lunch, try the atmospheric Antica Osteria U Funtanin, at the entrance to the old town.  For some fine seafood, have lunch at La Caravella, down on the waterfront.  Otherwise, for a special treat, try the Balzi Rossi, an elegant restaurant with a panoramic terrace with spectacular views over the coast.

From here you can climb up to visit the medieval town, stopping at the Annuziata Fort to enjoy the spectacular views over the coast.  Apart from enjoying the winding streets and lanes with shops and cafes you could also visit the excellent Archaeological Museum and the cathedral, which dates from the 12th century.

Go for a walk.  A nice alternative is to go for a very pleasant 4 kilometre walk along a restored section of the Via Julia Augusta, the important road that connected Roman Italy with Gall.  The well-marked trail starts at the church of San Michele, a Romanesque church in the upper town that has a series of 14th century frescoes.  You follow a short section of the main roan, before picking up signs for the trail that take you through pine forest, past villas and gardens to the Piana di Latte.  You can either catch a bus back to Ventimiglia or for your tracks back