September 2019: sails in Trieste; pickily pear celebrated; and a

The Barcolana; Trieste, 4 to 13 October; www.barcolana.it.  The Barcolana is one of the most spectacular sailing events in the world with over 2,600 boats of all sizes (over 16,000 sailors) filling the beautiful Gulf of Trieste with sails, all starting together from the same line.  The Guinness Book of Records judged last year’s Barcolana (the 50th) as the largest sailing race in the world.  The race is preceded by ten days of events celebrating this beautiful city’s nautical traditions and history.

The Festival of the Prickly Pear; San Cono (in the province of Catania, Sicily); 11 to 13 October; www.siciliainfesta.com/sagre/sagra_del_ficodindia_san_cono.htm.  This small town on the slopes of Mt Etna is known as the ‘city of prickly pear’.  The ‘bastardone’, the local variation of this spikey cactus, produces a succulent fruit that is renowned throughout Sicily and is a mainstay of the local economy.  Music, dancing and tastings are featured in this, the 34th annual celebration.

The Hills of Prosecco, Treviso (Veneto); www.unesco.it.  Thanks in part, I’m guessing, to the ubiquitous Aperol Spritz, Prosecco is the most widely sold wine in the world.  The hills between Conegliano and Valdobbiadene where Prosecco is produced. are a mosaics pretty towns, historic vineyards and sweet rolling slopes.  The 43rd UNESCO Committee meeting (held recently in Baku, Azerbaijan) listed the area as a World Heritage Cultural Landscape (the 10th in the world) a unique territory created by a myriad of small producers over centuries of endeavour. 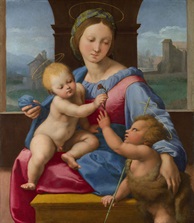 Raphael and his Friends; National Galley of Le Marche; Palazzo Ducale, Urbino, until 19 January; http://www.gallerianazionalemarche.it  2020 is the 500th anniversary of Raphael Sanzio, one of the greatest painters and architects of the Italian Renaissance.  Hosted in his beautiful hometown, and including a number of his masterpieces, this very important exhibition explores the influence of Leonard’s innovations on Raphael and his friends, including Pietro Perugino and Girolamo Genga.  Worth a trip in itself!

After Canova, from Rome to Florence;  Palazzo Cucchiari, Carrara (Tuscany); until 22 October; https://dopocanova.palazzocucchiari.it/  With over thirty works coming from the Hermitage in St Petersburg and a number of public and private Italian collections, this important exhibition explores the revival of sculpture in Italy in the first half of the 19th century.  If features three works by the master Canova (including a portrait of Napoleon) was well as works by Dupre, Bartolini and Thorvaldsen.

Bacon, Freud and the ‘School of London’; Chiostro di Bramante; Rome, until 22 February; www.chiostrodelbramante.it  In collaboration with the Tate Gallery in London, this exhibition presents the works of Francis Bacon and Lucien Freud together for the first time in Italy.  They are complement by the works of five other London-based artists of the so-called ‘London School’ (all seven were migrants) which were produced between 1945 and 2004 which was one of the most inspiring chapters in contemporary art.

Surveying his flock, cream spots on a sea of waving pea-green grass ringed by the snow-streaked peaks of the Apennine mountains, Nunzio Marcelli seems a lot like a figure from the Hobbit.  He is a bear of a man, with a silver ponytail, a thick square beard, large hands, and a pair of pensive eyes twinkling behind thick black eyebrows.  For six months of the year, without power or running water, Nunzio and his wife Manuela share their lives with one thousand five hundred sheep and goats in the high country of Abruzzo in the heart of central Italy, one of the remotest and most sparsely populated areas of the country.

Of course, looks are usually deceiving.  Both Nunzio and Manuela have degrees in Agricultural Science from Rome and they have come up with a number of brilliant ideas to help revive one of Italy’s oldest, and most endangered, traditions.  Transhumance, walking animals up from the valleys to graze on the rich summer pastures in the high country, is older than Rome itself.  Low prices, tough lifestyle and the lure of the cities, has meant that this ancient tradition has almost disappeared in many parts of the country.  Enter Nunzio and Manuela.  Some years ago, they formed the Regional Association of Sheep and Goat Herders.  Thanks to this, the development of a series of innovative practices and the internet, the Association now has over one hundred members, forty thousand head of sheep and goats and an international market, sending the finest quality products such as cheeses, milk, meat, spun wool and fabrics to markets as far away as New York, Singapore and Australia.

But their ambition was not only economic, they also wanted to share their experiences with the ‘people of the plains’: clients, friends and tourists.  Nunzio and Manuela have opened their own accommodation, the Agriturismo La Porta dei Parchi, where guests can enjoy mountain air and mountain hospitality, sampling local produce as well as joining in on activities such as cheese-making, shearing, and cooking classes, depending on the season.

The star turn happens, though, in late spring when the sheep and goats head for the high country and then again in autumn when the flocks come back down again.  The flock is divided into groups of four hundred or so and have staggered departures.  Each group is accompanied by Nunzio, two or three shepherds, four or five Maremmano sheep dogs and a dozen or so guests.  The forty-kilometre trek, which ascends around eight hundred metres in total altitude, is spread over four days/three nights.  You sleep in agriturismo’s for the first and last nights and comfortable bed-and-breakfasts in a tiny village along the way.  During the day, you walk at sheep’s pace through some of the most picturesque country in Italy, with plenty of time to enjoy the silence and the breathtaking scenery that surrounds you.

By train:  Sulmona, the nearest large town, is connected by regional trains directly from Rome and from Milano via Pescara on the Adriatic Coast.  Regular buses leave Sulmona for Anversa and take around 30 minutes (www.tuabruzzo.it).  By car:

B&B La Dimora di D’Annuzio, Scanno, Piazza Santa Maria della Valle.  Set in an historic palazzo on the main square where the eccentric writer Gabriele D’Annuzio (much loved by Mussolini) lived for two years from 1884 to 1886.  The three comfortable rooms are dedicated to three of the writer’s lovers.  A double room costs 70 euro, b&b.

Agriturismo Javanna (Scanno, Locality Jovanna).  A farm surrounded by forests on the road to the Godi Pass.  The accommodation includes free bikes to explore the area.  Meals are homecooked largely using their own produce.

Alla Fonte (Scanno, Via Fontana Sarracco).  This old-school restaurant is next to the fountain in the centre of town and offers dishes such potato pie with pecorino cheese; pacheri (a soft, tubular pasta) with baccala (dried cod) sause and an unusual local lamb hamburger.  Around 35 euro per person.

Il Rifugio del Lupo (Scanno, Via Regionale 479).  Not far from the Sacnno lake, this cozy little mountain lodge (dedicated to the wolves who populate the surrounding forests) specialises in game.  Around 25 euro per person.

The guided trek takes four days and includes three nights accommodation, taking you from Anversa degli Abruzzi to Scanno following centuries old transhumance trails.  They are organised by the Agriturismo Porta del Parco (www.agriturismoportadelparco.it?????).  The trek includes all meals (including cut lunches) and accommodation and costs from 260 euro per person.

The treks set out in late spring when the snows have melted to take the animals up to the summer pastures and then again in early autumn to bring the animals back down.  Check the website for the schedule and to book.  The itinerary below describes the spring outings.  The autumn outing work in reverse.


Day 1:
Explore the interesting little town of Anversa degli Abruzzi.  It’s most significant monument is the ruins of a Norman castle, dating from the 1th century.  In 1896, the vision of the castle’s craggy tower inspired the eccentric writer Gabriele d’Annuzio to set one of his early success here, a morose tragedy called La Facciolata sotto il Moggio.  To celebrate this, the town organises a literary event each summer.  The agriturismo La Porta del Parco is a short drive from here.  Settle into your accommodation, meet the crew then enjoy dinner and a detailed briefing of the next three days.

Day 2:
The first day’s walk is the most evocative, following the ‘gole’ of the Sagittario River, deep canyons that are now part of a four-hundred hectare park under the protection of the World Wildlife Fund.  The head of the river is dominated by Villalago, which has the ruins of an 11th century Lombard fortification.  After passing through a number of small, semi-abandoned hamlets.

Day 3:
Today you climb up the slopes of Mt Genzana to the high pastures at Chiarano which has an altitude of 2100 metres where where you rendezvous with the flocks of several other shepherds, a moment of great celebration.

Day 4:
Today you leave the flocks to their summer grazing and head back down into the valley, stopping at the tiny hamlet for lunch at the agriturismo of Lorenzo (who has a number of buffalos, whose milk he uses to make a celebrated mozzarella.  From here you continue down to Scanno, the largest town of the district which has buses back to Sulmona.