Welcome to Winter edition of the Hidden Italy newsletter… winter is fabulous time to visit Italy, there is always a lot on: exhibitions open, opera seasons start, there’s some of the best skiing in Europe and all that wonderful winter food………

We are running our last Puglia guided tour this May (3 to 15 May 2013)!  We have new spring guided tours for 2014 (to be announced) and this is our last tour to Puglia… there are still a couple of places, so if you’d like to join, please let us know.

Winter Flowers - the Radicchio Festival, Treviso (Venice) until 7 April;  www.fioridinverno.tv.  This celebrated, and delicious, Venetian chicory, is the result of autumn frosts and melted snow – before harvesting regulations require that it must have experienced at least two frosts and be immersed in running water for at least twenty days (to bleach the colour) before sale!  A series of events have been organised in a number of towns around Treviso in its honour.  Check out Jamie Oliver’s blog for some great recipes:  http://www.jamieoliver.com/recipes/vegetables-recipes/radicchio-and-rocket-salad-insalata-di-radicchio-e-rughetta

Venice Carnevale – Live in colour, from 26 January to 12 February; www.carnevale.venezia.it.  There is an amazing calendar of events for the Carnevale this year, themed on the colours used by the great Venetian painters such as Titian, Bellini and Tintoretto.  It includes musical and theatrical events dedicated to yellow, red, violet and green.  Starting tomorrow with a masked parade and the opening of two skating rinks in Campo San Polo, the Carnevale finishes on 12 February with ‘Silent Strokes’ a procession of gondolas from the Rialto to St Mark’s, with the Grand Canale in total darkness except for the light of thousands of candles.

The Grand Ball of the Castle, Verres (Aosta) from 9 to 12 February;  www.carnevaleverres.it.  On 31 May 1450, Caterina di Challant, the lady of Verres Castle, descended to visit the village below, dancing in the piazza with her subjects.  This magnanimous gesture inspired this beautiful winter resort’s carnival, which, among other events, includes a grand ball in castle. 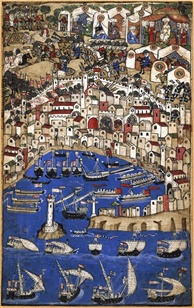 On the Silk Road, Ancient Paths between the East and the West;  Rome, Palazzo delle Esposizioni, until 10 March; www.palazzoesposizioni.it/categorie/via-della-seta.  The fascinating stories of incredible journeys made between the 7th and 14th centuries by merchants, pilgrims and explorers along the tangle of trails that connected the East and West is told via maps, objects, reconstructions, interactive itineraries and video installations.

Alchemy and Art, Florence, the Uffizi Gallery until 3 February www.polomuseale.firenze.it.  Between the 1500’s and 1600’s, the Medici developed a great interest in alchemy and its promise of endless gold. such that they built a foundry in the Palazzo Vecchio for experiments and observations.  This original exhibition analyses this passion for science, technology, philosophy and magic through 60 works, including drawings, sculptures, paintings and recipes.

The Year of Italian Culture in the United States 2013; www.italyinus2013.org. Michelangelo’s sculpture David-Apollo has returned to Washington after a 60 year absence (there earlier for Truman’s inauguration) to kick off the Year of Italian Culture in the United States, a project of the Italian Ministry of Foreign Affairs.  More than 180 events in over 30 U.S. cities have been organized.  70 museums and cultural institutions throughout the U.S. will display masterpieces on loan from Italy that range from the classical to the contemporary (Caravaggio in New York and San Francisco; Bernini in Fort Worth; Leonardo in Washington). In addition to a wealth of art, musical, theatrical and cinematic offerings, there will be events focused on literature, science, design, fashion, and Italian food.

Monte Cimone is the highest peak in the Central Apennines mountain range, sitting on the border between the regions of Tuscany and Emilia-Romagna like a big white panettone.  At only 2165 mt, it’s not a giant compared to the mountains in the Alps but it’s covered with snow for six months of the year and as there are no other high peaks nearby, on a clear day it can seem like Mt Blanc, with uninterrupted views across much of central Italy.

In the thick forests at the foot of the mountain is the gorgeous medieval town of Sestola, much loved by the Tuscans and residents of the nearby cities of Modena and Bologna for its location and its lively bars and shops.  The first ski club in Emilia-Romagna was founded here in 1927 and it has been a popular destination, particularly in the mythical 1960s and 70s.  With over 50 kilometres of ski runs, great accommodation and charming villages and towns within striking distance of Modena, Bologna, Pistoia and Florence, it offers a very relaxed and reasonably priced (Day tickets are between 28 and 33 euro per person) alternative to the more celebrated ski resorts in the Dolomites and the Alps.


How to get there:
The closest airport is in Bologna, 80 kilometres away.  By train you’ll need to change at Bologna (which is on the main line between Rom/eFlorence/Milan/Venice) and take the local train to Vignola and then the regular bus service from the station to Sestola (www.tper.it).  There are also regular bus services directly from Bologna (www.tper.it) and Modena (www.setaweb.it).   If you drive, take the A1 and, if you are coming from the north, take the Modena Sud exit for Vignola and follow the signs or, if you are coming from the south, take the Pistoia exit then follow the signs to Porettana, Silla and Lizzano.

Where to stay:
Accommodation is very good and very reasonably priced.  The Hotel San Marco in Sestola is the classic address, a 4-star hotel set in a restored villa dating from the early 1900s (Via delle Rose 2; tel: 0536 62330) with ¾ board starting at 58 euro per person.  Hotel Firenze in nearby Fanano has been in the family for three generations - it’s a popular spot with skiers and families, with a new ‘baby club’ with animators (Fanano, Via Roma 33; tel 0526 68822) – ½ board around 40 euro per person..  The Albergo Ristorante Gabriella is particularly well known for its cooking and is tucked away in the mountains near the hamlet of Cimoncino (Canevare di Fanano, Piazza dei Falchi 15; tel: 0536 68028) – ½ board around 50 euro.  For something really special (and very  romantic) consider staying in one of a number of excellent ‘rifugi’, very comfortable mountain huts, usually family-run and usually offering the very best of mountain cuisine.  The best known is the Rifugio Ninfa, at 1500 metres, close to the pretty Lago della Ninfa, which is often frozen over - it was restored in 2011 in occasion of its 100th anniversary and ½ board (including a delicious mountain dinner) is around 60 euro per person.

Where to eat:
Being between Tuscany and Emilia-Romagna, not too far from Bologna and Florence, the cooking in the area is exceptional, particularly in winter when it comes into its own: mushrooms, truffles, snails, handmade gnocchi, borlenghi (the local pasta), bean soups, lasagne, rabbit alla cacciatora, local ricotta and, of course, the area’s famous tortellini is it’s many variations.  It’s hard to go wrong but some of the better known restaurants include:  La Vecchia Locanda Zita (in the hamlet of Vesale near Sestola) and the Ristorante Mamma Teresa (in the hamlet of Casine also near Sestola) - both historic places that specialise in the local cuisine (the latter was once a staging place for the mule teams that crossed the mountains).  The Ristorante dell’Hotel San Rocco (Sestola, Corso Umberto 47, tel: 0536 62382) offers a more refined ambience and menu.


What to do:
Ski, of course (although I lived for two years with my family in Prato, on the Tuscan side of the mountains, and this area was lovely all year round, particularly as a refuge from the heat down on the plains in summer).

The skiing area of Mt Cimone offers over 50 kilometres of skiing runs, all interconnected.  Because the mountain is so exposed there is a great variety of snow types and has been the school of some of Italy’s greatest skiers including the inimitable Alberto Tomba and Giuliano Razzoli, former and current world and Olympic slalom champions.

The ski runs of Mt Cimone itself are very sunny and served by six two-person chairlifts, reaching a height of 1976 metres and starting at Cimoncino.  From here you can also do the more challenging Delle Aquile black run.  The second nexus is at the Passo del Lupo/Lago della Nifa, a zone that runs between 1550 and 1880 metres and is perfectly oriented north.  Some of the most loved runs start at the Passo del Lupo: the red ‘9’ run, the black Direttissima and the red Beccadella.  However, the most spectacular, and wild, run is the Baggiolara II.  The other main nexus is at Le Polle di Riolunato which, at 1280 metres, offers some long and undulating runs, such as the Sette Fontane, which passes almost entirely through forest.

For something completely different….. Pian Cavallaro is at the top of the runs, and the constant winds and its undulating form, makes it a perfect place for snow kites.  You can go ice-skating at Fanano for 10 euro per day.  There are regular guided nature walks, starting from the historic and isolated mountain hut Capanno Tassoni.  And, for those not so ecologically sensitive, you can go on skimobile tours from the Passo del Lupo at around 15 euro for a 15 minutes ride!