Once a neglected region renowned more for its Mafia strongholds than its tourist destinations, western Sicily has been reborn over the last 10 years and has much to offer, including its history, natural beauty, national parks and its food and wines.

Starting with a private transfer from Palermo, this tour takes you to the Egadi islands off the western tip of Sicily.  You’ll spend the next four days exploring this fascinating and beautiful archipelago.  From here you’ll be taken to Sicily’s first national park for the last two nights, a spectacular piece of coastline stretching along the Castellamare Gulf, which you’ll walk along on the last day.

On the way to the park, you’ll visit Erice, an ancient village perched high on a mountain.  The tour finishes with a private transfer back to Palermo (you’ll have the option of adding a guided tour to the ruins of Segesta, one of the most important ancient Greek cities in Sicily).

The walks on the Sicily 2 self-guided walking tour follow well marked trails along good paths over generally undulating countryside.  They are a combination of coastal and island walks and range from 9 kilometres to 14 kilometres, taking 2.5 to 5 hours, not including breaks.  In some cases, it is possible to shorten the walk or to opt out and join the walkers for lunch.  This is a Grade 2 walk - gradings for the individual walks are on the itinerary - click the link for each day to see the details.

The self-guided itineraries are rewalked and the notes updated each year. 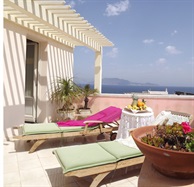 The accommodation is in very comfortable, family-run 3-star hotels.  The superior rooms have en suite bathrooms, terraces and ample breakfasts are included.

The first hotel is in the centre of the main town of the Egadi Islands, only 50 metres from the seaside and a short walk from the port.  It is in an historical building that has been recently restored.  You'll spend four nights here.  The second hotel is in the centre of a small fortified hamlet a short walk from the seashore.  You'll spend two nights here.  Both hotel's have excellent restaurants. 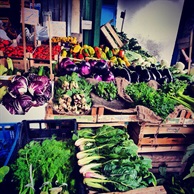 As far as Sicilians' are concerned the best things in life include good company, family life, sunny days and above all, good food.  Sicily's cuisine is as rich and diverse as its history: olive oil and wines from ancient Greece; elaborate dishes such as maccu di san giuseppe from Roman times (a delicious soup based on fava beans and fennel); citrus, saffron, cinnamon, couscous and gelato from the Arabic occupation; tomatoes, turkey and maize from the Spanish New World.  Eating and drinking in Sicily is synonymous with a delicious journey back in time!

If you select the 'Dinners option' (which we recommend) this will include four 3-course meals alla carte (Days 1, 3, 5 and 6).

Support on the walk:

To guide you through this wonderful walk, you will receive:  the Hidden Italy roadbook (an eighty-page A5 booklet that includes comprehensive daily walking notes accompanied by detailed maps, updated and revised each year);  access to the exclusive Hidden Italy App to complement the roadbook (the App is downloadable to Apple and Android devices and features information about the routes: maps, GPS tracks, altimetric profiles, etc; GPS navigation on all the routes; an alert function if you stray off the track; and an emergency function);  twenty-four-hour phone support from our Florence-based Operations Manager.

Click here to print a copy of the Sicily 2 itinerary .pdf, 376 Kb

This 7 day tour can be personalised to meet your interests and travel dates.

*please note that the cost of the visit to the prehistoric grotto (10 euro pp) and the entrance fee to the National Park (5 euro pp) are not included.


5% discount applies when booking for a group 4 or more 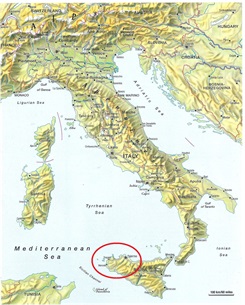 "I would like to say how much we  enjoyed the Sicily 2 tour.  It took us  to some  beautiful places which  we would have been unlikely to  find for ourselves, the accommodation was excellent,  the tour was good and the  transfers worked well."

Find out a little more about the 3. Southern Italy: Sicily 2, Western Sicily and the Egadi islands tour by reading some of our most frequently asked questions.

January 2020: Wild Women, Gates of Paradise and a weekend in Renon in the Dolomites