Scroll down to meet some of the people who make Hidden Italy Walking Tours happen. 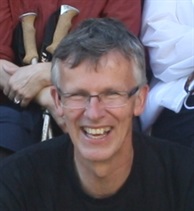 I first went to Italy as a backpacker in 1980 and fell in love with the country.  I returned in 1983, living and working in Milan until 1988. Afterwards I worked at the Institute of Languages, University of New South Wales (Sydney) taking guided tours to Italy annually. I spent two years with my family in Prato (Florence) in 2003 and 2004, working at the Monash University (Melbourne) Centre. Since then I have dedicated myself full-time to Hidden Italy. I love photography and writing and have had articles and photographs on Italy published in most major Australian newspapers and travel magazines. I speak fluent Italian, alas with a pronounced Australian accent.  "Great Walks" magazine recently said I had the best job in the world.. there are other much more worthy jobs around but I am lucky my passion has become my profession - click here to read their interview.

Carolyn and Simon met at a presentation by the Director of the Uffizi Gallery at the Italian Institute of Culture in Sydney - it was love at first sight (at least for Simon, Carolyn took a little more convincing). At the time, Carolyn was working at the Banca Credito Italiano in Sydney. Her love affair with Italy had begun some years before in 1982 when she spent three months in Tuscany. Some time later she returned to Tuscany, working for three years on a wine and olive oil estate outside Vinci, 20 kilometres south of Florence. Carolyn is the backbone of Hidden Italy. She speaks fluent Italian (with a very good Tuscan accent) and has a passion for Italian textiles and furniture.

As anyone who has done a Hidden Italy self-guided walk will know, Anna, our Italian operations manager, is a remarkable woman. She was born and grew up in the Val d'Orcia in southern Tuscany. She is a graduate in history and art from the University of Siena, has lived in the USA and Central America, speaks fluent English and Spanish and is a qualified and registered guide for Siena and Florence. Despite her tender age, she has lead walking tours throughout Italy for a variety of Australian, English, Canadian and American walking companies.  For the last seven years, she has lived in Florence.

Robyn was born and raised in Sydney, where she completed a Bachelor of Arts degree in Politics and International Relations and post-graduate diploma in teaching.  Since graduating, she has worked as an English teacher, a course coordinator and designer.  She has also applied her organisational skills as an education administrator and as an events manager.  Travel has always been her passion.  Over the last twenty years, she has visited over thirty different countries and has lived and worked for extended periods in the UK, Ghana and Argentina.  For the last three years, she has been living in Milan, working as an English teacher, a business coach and a city guide.  Robyn is responsible for booking and organising the Hidden Italy self-guided tours.

Born in Sicily and raised and educated in Australia, Carmelina returned to Italy for a brief visit in 1992 and has been there ever since. After 15 years of working in tourism throughout Italy (including stints running boutique 5-star hotels in Tuscany and the Italian Alps as well as managing and tour-guiding for several American and English walking companies) Carmelina returned to her native Sicily, setting up home near Cefalu.  She has been with Hidden Italy since 2010.  Click here for an introduction to Carmelina.

"Carmelina is a wonderful and generous guide.  We really felt her enthusiasm and passion for her country and feel that she really wanted us to share all those emotions.  ...she had friends in every town and was greeted so warmly .... her popularity was evident." 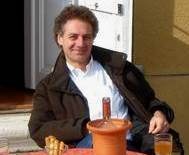 Paul is an art historian, author (including the Blue Guides to Piedmont, Northern Italy and Southern Italy and the Art/Shop/Eat series for Venice, Milan and Florence, among other things) and is a long term resident of Tuscany.  He is an active visual artist and has taught painting, drawing and the history of Modern art at the European study centres of several American universities.  In recent years he has become increasingly involved with landscape design, developing large-scale projects in Tuscany and the Dolomites.  He has designed and led walking tours in Italy since 1994.  He is also a very nice guy!  He lives with his family in Fiesole in the hills above Florence.

"As a leader and guide, Paul was kind, patient, helpful, extraordinarily knowledgeable and  a great companion.  He made the trip for us!"   AC, Gardens of Tuscany. 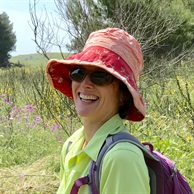 Sarah grew up in Tasmania where she developed her love for the outdoors, particularly hiking and skiing.  She has lived in Italy for twenty years.  Along the way, she collected a Masters in Italian Studies from UC Berkeley (California) and a PhD in Italian History from Sydney University.  During her time in Italy, she has had extensive experience guiding and administrating cultural tours for a number of American and English travel companies and universities.  Sarah is a great cook and an enthusiastic chorister.  She currently lives with her husband Roberto and young son on a small farm in southern Umbria, where, among other things, she is honing her skills in growing and producing olive oil.  I met Sarah years ago in Sydney and I’m very pleased that I finally convinced her to join the Hidden Italy team.

Nuccio (on the left) and Gandalfo are my dear friends and colleagues and are the backbone of Hidden Italy in Sicily. Both were born, raised and live in the small town in the centre of Sicily which is the base for the first part of Hidden Italy guided tours in May. As drivers of the two tour minibuses they accompany us throughout the Sicily guided tours (except for our time on the islands) but they are much more than this: they are fine examples of Sicilian grace and hospitality; Nuccio's picnics during the tour are legendary; while the visit to Gandalfo's family home in the country outside the town (a 19th century former baronial home built into the side of a cliff) is often considered one of the highlights of the trip.  Nuccio also provides the transfers and back-up on the Sicily self-guided walk.

Fabrizio (on the left) is our man in the Barbagia, in central Sardinia.  He fell in love with the mountains when, as a kid, he spent his summers with his uncle grazing in the high pastures. He's been exploring the mountains ever since.  He is a passionate guide, an accomplished photographer and plays a mean piano-accordion.  Maria-Giovanna was also born in Oliena.  She spent five years on the 'Continent', studying law in Bologna and working in Rome but her love for her native land drew her back to Sardinia. Their good friend Antonio (right) is a 'pastore' (a shepherd) he hosts us on his property, providing a wonderful BBQ lunch of homegrown suckling pig, accompanied by his own oil, bread, red wine and garden grown tomatoes - nothing better!

Exploring Puglia to research our guided tour, I was very lucky to meet Giovanni.  Criss crossed by country roads lined with dry stone walls and ancient pathways, Puglia offers wonderful walking but, unlike many parts of central and northern Italy, the walking routes have not been identified or marked.  I went to the council offices of our host town to get some maps and get going.  Fortunately, they put me in touch with their friend, Giovanni, Sports teacher at the local high school, a passionate walker and renowned local historian.  I spent many fascinating days with Giovanni exploring the area and have been able to incorporate a number of these walks into the tour.  Giovanni will join us on several of the walks in central Puglia.

Silvia and Marco are our capitains courageous in southern Puglia, taking us out on their two 12-metre yachts for a day exploring the sparkling waters and rocky coastline of  southern Puglia.  They are both proud Saletini (inhabitants of the Salento, the tip of the heel of Puglia) and they bring to life the history and traditions of their native region.  A highlight of the day is the picnic lunch on board - all rigorously local produce, of course.

Mauro does not describe himself as a 'guide', he considers himself more of a cultural emissary for his beloved Verona.  A recently retired professor of art and history, Mauro has travelled the world but has always returned to his native city and there are few things, or people, in Verona that he doesn't know.  Turning his nose up at the myth of Juliette's balcony, he takes us down little lanes, through hidden courtyards, into building basements to show us the real Verona, enlivened by historical tidbits, anecdotes and lots of local gossip.

Sonia and Alfred families have lived in the Val Badia in the heart of the Dolomites for many generations (and Alfred seems to be related to everyone in the valley) and join us for our autumn tour of these beautiful mountains. They are very proud of their rich Ladino heritage, which traces its roots back to pre-Roman times (their children speak Ladino at home, attend school conducted in German and Italian and are learning English as a foreign language all before the age of 10!) and are pleased to share their stories and traditions, bringing to life the valleys and villages of their homeland.

Francesca joins us in the Carnia Alps on the first leg of the Trieste and Friuli tour.  Built like a sparrow, Francesca has the energy and dexterity of a mountain goat.  With a list of quaifications as long as your arm, including degrees in Geology, Forestry and Environmental studies, she worked for 10 years as a digital cartographer in Udine before having a tree-change and leaving the big smoke to return to the valley she grew up in (20 kilometres from the Austrian border).  She now dedicate herself to making cheese from the milk produced by her flock of 12 goats and donig a bit of guiding.  Francesca joins us for the walks in her valley (where we spend  four days) sharing her knowledge and enthusiasm as we go.

Antonio joins us on the second leg of the Trieste and Friuli tour.  Born near Venice, Antonio moved to his wife's family village in the Natisone valleys on the border with Italy and Slovenia some years ago and has embraced his new home with passion.  Antonio joins us on what must be one of the most extraordinary Hidden Italy walks: following the ridge line that has formed a border, for better or worse, between the Latin and Slavic worlds since Roman times, including most recently as a part of the Iron Curtain and as a bloody frontline in World War I.  Antonio unlocks its secrets and stories with an encyclopedic knowledge and narrative flair that rivals Ken Follett.

Matteo is one of our guides on the TraIls to Freedom hike in August.  He is 33 years old and lives in Tollegno, a small town near Biella.  A passionate hiker, lepidopterist (butterfly expert) and mountaineer, Matteo has a Phd specialising in the conservation of biodiversity in the Alps from Turin University, has extensive teaching experience, is a qualified Alpine guide  and speaks excellent English.