The largest island in the Mediterranean, Sicily is squeezed between Europe and Africa, between Christendom and Islam. It's a spectacular region with exceptional walks following country lanes, mountain trails and coastal paths. The perfect destination for an off-the-beaten track adventure.

The challenge in organising a walking tour in Sicily lies in what to leave out rather than what to include but after a decade of taking walking tours around Sicily, we feel we've got the balance right.

There is not one but many different Sicilys: the Baroque splendours and crowded markets of Palermo; the magnificent solitude of the island's Greek temples and theatres; the timelessness of forgotten villages scattered through the green interior; the glamour and bustle of Taormina; the dreamy mirage of the Aeolian islands and the power and majesty of Mt Etna.

This relaxed fourteen day tour will take you off the beaten track and give you real insight into Sicily's diversity and the legacy of the civilisations that have taken root in its fertile soils since the dawn of time: the Siculi and the Phoenicians, the Greeks and Romans, the Moors and the Normans, the Spanish and the French.

This walking tour in Sicily has a variety of walks including easy coastal strolls, longer mountain walks following unsealed country roads as well as more challenging ones such as the walk to the top of Vulcano in the Aeolian islands. Going in May means that we'll be able to enjoy the island's idyllic spring weather and abundant wildflowers as well as avoid the crowds of the busier seasons. In some cases it is possible to shorten the walk or to opt out and join the walkers for lunch.  Gradings for the individual walks are on the itinerary - click the link for each day to see the details.

Accommodation is in very good, centrally located boutique hotels: a grand 4-star hotel in the heart of Palermo; a recently restored patrician palazzo in the heart of our sleepy village in the mountains; a 4-star hotel overlooking the old port in Lipari and below the Greek theatre in Taormina, with spectacular views and a large swimming pool.  All rooms have en suite bathrooms and air conditioning.

One of the highlights of the tour is the exploration of the island's diverse and wonderous cuisine (some would say the finest in Italy): the rich ‘cucina povera' of Palermo; the fine country cooking of the interior; the excellent seafood of the Aeolian Islands and Taormina - all the ingredients rigorously seasonal and local.  We'll eat in fine restaurants, small trattoria's, enjoy picnic lunches, all exalting the best of Sicilian cooking.  Wine is included with all meals.

The tour will be lead by Simon Tancred.  "I first went to Italy as a backpacker in 1980 and fell in love with the country.  I returned in 1983, living and working in Milan until 1988. Afterwards I worked at the Institute of Languages, University of New South Wales (Sydney) taking guided tours to Italy annually. I spent two years with my family in Prato (Florence) in 2003 and 2004, working at the Monash University (Melbourne) Centre. Since then I have dedicated myself full-time to Hidden Italy. I love photography and writing and have had articles and photographs on Italy published in most major Australian newspapers and travel magazines. I speak fluent Italian, alas with a pronounced Australian accent.  "Great Walks" magazine recently said I had the best job in the world.. there are other much more worthy jobs around but I am lucky my passion has become my profession - click here to read their interview."

Interested in the Sicily walking tour in the spring: Palermo to Taormina Guided Tour? 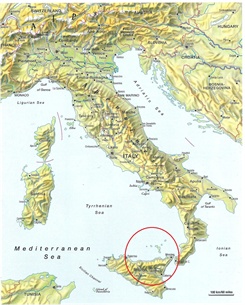 Sicily walking tour in the spring: Palermo to Taormina FAQs

Find out a little more about the Sicily walking tour in the spring: Palermo to Taormina tour by reading some of our most frequently asked questions.

I am still in such a post Sicily high - of course the tour exceeded my expectations. You have spent so much time and thought into the itinerary... even though my expectations were high, the place thoroughly seduced me - it's so magical.

December 2019: an underwater gallery and a weekend in Italy's wildest national park