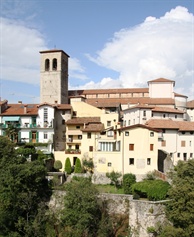 With its mountains, plains and seashores all less than an hour's drive apart, Italian writer Ippolito Nievo fondly described Friuli as a "little compendium of the universe".  This Hidden Italy special sets about exploring that universe.

The tour starts with two days in Udine, an elegant provincial capital.  We then drive north-east into the mountains to a beautifully preserved village above a lake in a quiet valley in the heart of the Carnian Alps, our base for the next four days.  From here we go east across the plains to ‘Venetian Slovenia’, a wedge of beautiful forested hills that forms the frontier between Italy and Slovenia.  Our base is an elegant old estate in the heart of the Collio wine producing area.  Our last two nights are in the grand port city of Trieste, for four centuries the Mediterranean port for the Austro-Hungarian Empire - a fitting place to end our visit.  Trieste has fast train connections to the rest of Italy.

Food is an important part of any visit to Italy but this is particularly true of FVG which has some of Italy’s finest produce, including Collio wines, San Daniele ham and Montasio cheese, while the farmers’ markets of Gorizia and Pordenone are legendary.  The Via dei Sapori is an association twenty of the region’s best restaurants and we will follow their trail (there is one in each of the places we visit) using them as a key to unlock the secrets of FVG cooking.

With its pristine forests, national parks and fascinating history, Friuli offers some wonderful walks, including exploring the valleys and mountains of the Carnian Alps; following the historic trails through the hills that hug the Slovenian border; walking through the vineyards of the Collio region. The walks range from 8 to 17 kms and follow well-marked trails, mostly unsealed country roads. In some cases it is possible to shorten the walk or to opt out and join the walkers for lunch. Gradings for the individual walks are on the itinerary - click the link for each day to see the details.

The tour starts with two nights in a classic four-star hotel in the centre of Udine and finishes in one of the grand hotels of Italy: set in an elegant palazzo dating from 1727 overlooking the Piazza Unita d'Italia, the heart of Trieste.  In between, we stay in a beautiful family-run mountain lodge for four nights and another four nights in an elegant old Austro-Hungarian estate in a vineyard on the edge of the captial of the Collio wine district.

With its long coast line, fertile plains, unspoilt mountains and ancient traditions, the food of Friuli is as diverse as the region itself.  Friuli also produces some of Italy's finest ingredients.  We'll use the 'Via dei Sapori', a group of the twenty finest restaurants in Friuli, to unlock the secrets, not only eating their wonderful meals but also visiting their suppliers: farmers markets, cheesemakers, prosciutto producers, vegetable growers, vignerons.... We will also enjoy a cooking lesson along the way. 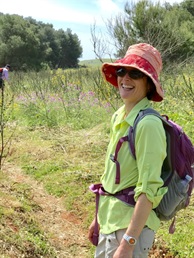 Sarah grew up in Tasmania where she developed her love for the outdoors, particularly hiking and skiing.  She has lived in Italy for twenty years.  Along the way, she collected a Masters in Italian Studies from UC Berkeley (California) and a PhD in Italian History from Sydney University.  During her time in Italy, she has had extensive experience guiding and administrating cultural tours for a number of American and English travel companies and universities.  Sarah is a great cook and an enthusiastic chorister.  She currently lives with her husband Roberto and young son on a small farm in southern Umbria, where, among other things, she is honing her skills in growing and producing olive oil.  I met Sarah years ago in Sydney and I’m very pleased that I finally convinced her to join the Hidden Italy team.

Interested in the Trieste and Friuli walking tour in autumn: Udine to Trieste Guided Tour? 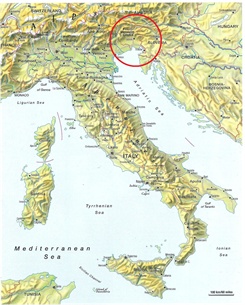 Find out a little more about the Trieste and Friuli walking tour in autumn: Udine to Trieste tour by reading some of our most frequently asked questions.

Again, just wanted to say how much we thoroughly enjoyed your tour and it was the best travel decision we've ever made.

January 2020: Wild Women, Gates of Paradise and a weekend in Renon in the Dolomites