Sardinia is the second largest island in the Mediterranean, suspended in the blue waters between Corsica and Sicily.  In some ways there is no place in Italy that is less Italian than Sardinia.  The island’s nearly pristine natural beauty has been sculpted by the wind rather than the chisel.  Their cuisine is full of flavours nearly forgotten elsewhere.  Their greatest monuments are bare stone megaliths, a secret prehistoric network that binds the island together from north to south.

The Sardinians themselves don’t pose and preen like their mainland cousins: they are hard-working, relaxed and open and there are few other places in Italy that have a better knack of making you feel at home than Sardinia.

Our tour starts in Cagliari, the islands dynamic capital, then has four nights on a tiny island just off the southern coast, four nights in the mountains of the interior and finishes with two nights on the spectacular Costa Smeralda on the island’s north-eastern coast.

The walks on this tour are as varied as Sardinia itself: including a guided morning walk through Cagliari's old town; spectacular walks along the island's peerless coastline; walks in the mountains with breath-taking views of the interior and a forest walk to find the ruins of a Pheonician temple.  They are from 10 to 14 kilometres long, taking 3 to 5 hours, and follow good trails over mostly undulating terrain. In some cases it is possible to shorten the walk or to opt out and join the walkers for lunch. Gradings for the individual walks are on the itinerary - click the link for each day to see the details.

Sardinian cooking is deeply rooted in its past, full of flavours nearly forgotten elsewhere.  The essence of Sardinian cooking is unmistakeably biased towards traditional country dishes: suckling pig and wild boar; rustic stews with wild vegetables and hearty beans; fresh pastas; mountain cheeses and boggling array of breads, including the famous carta da musica... and, of course, plenty of fresh seafood on the coast.  We will eat in a variety of settings including elegant dining in Cagliari and on the Costa Smeralda; seaside osterias, country trattorias, midday picnic and lunch with shepherds in the mountains.

Born in Sicily and raised and educated in Australia, Carmelina returned to Italy for a brief visit in 1992 and has been there ever since. After 15 years of working in tourism throughout Italy (including stints running boutique 5-star hotels in Tuscany and the Italian Alps as well as managing and tour-guiding for several American and English walking companies) Carmelina returned to her native Sicily, setting up home near Cefalu.  She has been with Hidden Italy since 2010.  Click here for an introduction to Carmelina.

"Carmelina is a wonderful and generous guide.  We really felt her enthusiasm and passion for her country and feel that she really wanted us to share all those emotions.  ...she had friends in every town and was greeted so warmly .... her popularity was evident."

Interested in the Sardinia walking tour: Cagliari to the Costa Smeralda Guided Tour?

•12 nights accommodation (see the itinerary for details) in 4-star boutique hotels
•All breakfast, and all lunches and dinners (wine included) listed in the itinerary
•All land and sea transfers during the tours
•All taxes and service charges at the hotels and restaurants
•All paid admissions during the tour
•7 guided walks
•Services of a full-time professional tour guide 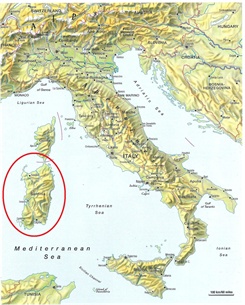 Find out a little more about the Sardinia walking tour: Cagliari to the Costa Smeralda tour by reading some of our most frequently asked questions.

It was wonderful! Your attention to detail was so good and everything fell into place. The walks were beautiful, wonderful scenery - wildflowers, dry stone walls, vines and olives and the first appearance of the next village, absolutely stunning.